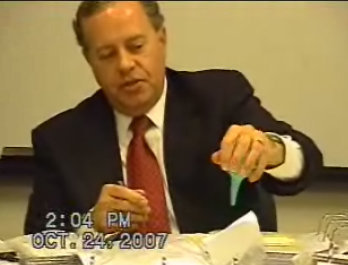 [Note: this post has been corrected. Please read the note at the bottom, and comments, for further clarification.]

Reporters' and consumers' groups are protesting the Obama administration's decision to remove from the web a database of disciplinary actions and malpractice suits against physicians. The file, which has been online and publicly available since 2001, hides the names of individual doctors.

But that hasn't stopped reporters over the past decade from doing just that, using court cases and other public records to identify doctors who allegedly caused a woman's death through botched plastic surgery, prescribed lethal doses of drugs and other alleged offenses. The reporters uncovered many cases where doctors continued to practice medicine, often without sanction, after multiple allegations of misconduct or incompetence.

Brandon Stahl, a reporter for the Duluth News-Tribune, used the file, known as the Public Use File of the National Practitioner Data Bank (NPDB), to discover that one of the most highly-paid doctors in town had racked up nine malpractice suits and an official sanction in a few years. "I think the public benefited from our use of that database," Stahl said. "It was crucial for our story."

The information is now available by request only to researchers and others who say they won't use it to find doctors' names. Martin Kramer, a spokesperson with the Health Resources and Services Administration (HRSA), the agency that maintains the data, says that officials were legally bound to remove the file once it was brought to their attention that it could be used to violate physician confidentiality.

The data went offline earlier this month after a reporter with the Kansas City Star identified a doctor who allegedly caused the wrongful death of a local woman. Before printing the story, the reporter received a letter from the agency threatening fines of $11,000 per offense for revealing the doctor's identity.

The physician names are redacted in accordance with the Privacy Act of 1974, which protects personally identifiable information collected by federal agencies. But the 1986 law that created the file stipulates that as long as the individuals can't be identified, the information must be given out if requested.

Reporters' groups and consumer advocates issued letters and statements last week protesting the decision. Charles Ornstein, president of the Association of Health Care Journalists, said he was puzzled by the sudden withdrawal of the data that reporters had used so many times before.

Investigative Reporters and Editors is making the data available onine, and has joined the protest of the Association of Health Care Journalists and the Society of Professional Journalists. IRE's data is current through August 2011.

The Obama administration has repeatedly announced its commitment to the sharing of information online. President Obama released a memorandum calling for an Open Government Directive on his first day in office, which launched later that year, requiring each agency to make "high value" datasets available on its website.

Lisa McGiffert, director of the Consumers Union's Safe Patient Project, said this information is vital to consumers. "This database is really the only source of information about physicians' discipline and medical malpractice history," she said. Without it, reporters looking for a national perspective or for doctors who move to different states after being sanctioned would have to go to each state agency individually–and the quality of the data varies from state to state.

For its part, the American Medical Association (AMA), the nation's largest physician trade group, issued a statement "welcoming" the decision. According to the AMA, "duplicate entries, inaccurate data, and inappropriate information in the NPDB provide, at best, an incomplete and haphazard indicator of a physician’s competence or quality. Providing the public with unreliable or misleading information on physicians will encourage patients to make ill-informed decisions about their health care."

McGiffert, however, thought patients would benefit from the data. "The oversight of physicians, many of us believe, is inadequate," she said. "Doctors who have repeated problems over time are not dealt with in a timely manner." McGiffert added that reporters are most likely to get onto the trail of a doctor with particularly egregious conduct. "Those doctors who have a long enough rap sheet are easy to identify so we're talking about doctors who have a long history of problems," she said.

*–[Editor's note: In the original version of this story, this line continued to say that, "…in fact, reporters are forbidden from publishing any names that they discover on their own accord." In fact, unlike many other federal health care data sets, including several Sunlight has requested, the NPDB public use file did not require users to agree in advance to restrictions in how they used the data. HRSA maintains that it is forbidden from releasing the data in a format that allows for the identification of doctors, and argued the entire database had to be removed because one doctor was identified. The Reportng Group regrets the error.]