On Wednesday Sunlight released a list of lobbyists tweeting online, allowing for collective insight into their world; who they follow; what they’re promoting; and a view of how they operate through the prism of Twitter.

Yesterday Tony Hirst, lecturer in the Department of Communication and Systems at The Open University and author of ouseful.info created a series of visualizations delving deeper into our Twitter lobbyist list.

(Please keep in mind that this is just a sampling of lobbyists active on Twitter and a snapshot of their activity, I find these visualizations more interesting than instructive.) 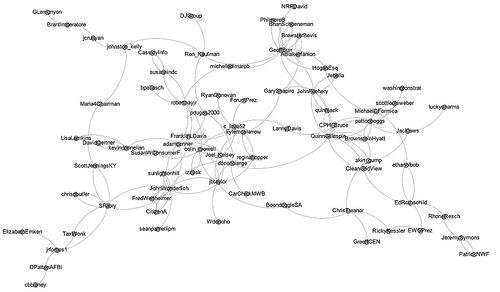 Public social connections between members of the @SunFoundation/lobbyists list 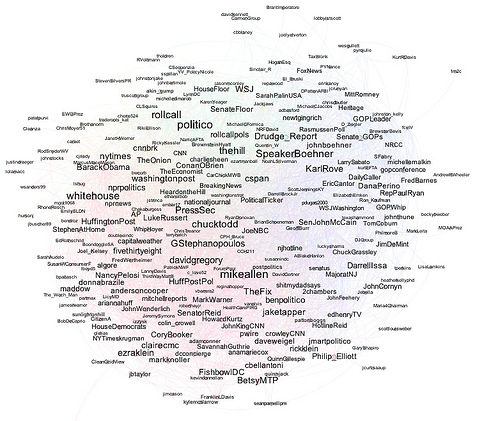 That is, folks who are followed by 20 or more people on the list… 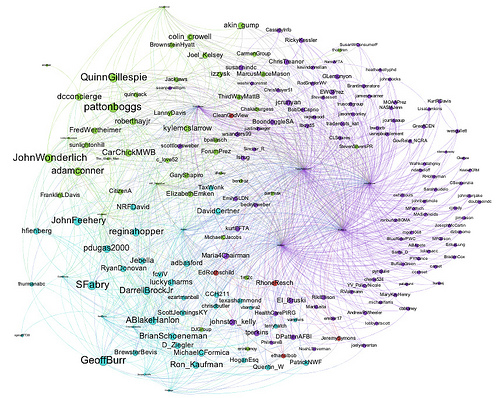 Method: grab the followers of folk on @sunfoundation/lobbyists, generate a net from follower to list member, filter list to nodes of degree>=20, size nodes according to out-degree, colour according to modularity statistic identified cluster. 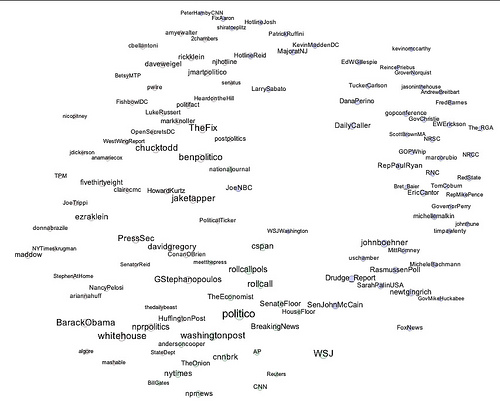 Snapshot of US politics?

For each of the folk on the @sunfoundation/lobbyists list, grab a random sample of 97 their followers (or all their followers if they have less than 97). Find the people from those samples who follow at least 2 members of the list and generate the graph of those followers and all the people they follow. Filter that graph to show nodes with degree >=100, lay it out using a force directed layout in gephi, sizing nodes according to HITS Authority, then filter it again to only show nodes with indegree of 2 or more.

The intuition is that this view shows people who are followed by large numbers of people who follow 2 or more of the lobbyists.

If you want to do a bit of sleuthing yourself, please take a look at the Twitter lobbyist list itself or you can download this .csv file of the last 50 tweets from 191 of these lobbyist Twitter accounts to draw a bigger picture.