Earlier this year, we learned that General Electric paid no federal income taxes. One reason, the New York Times reported, was that “G.E. has spent tens of millions of dollars to push for changes in tax law.”

As it turns out, G.E. is not alone in aggressively (and seemingly successfully) lobbying on tax legislation. According to a new Sunlight analysis, the more tax bills companies lobby on, the lower their effective tax rate.  As the graph below shows, the companies that lobby on the most tax bills generally pay the lowest tax rates. 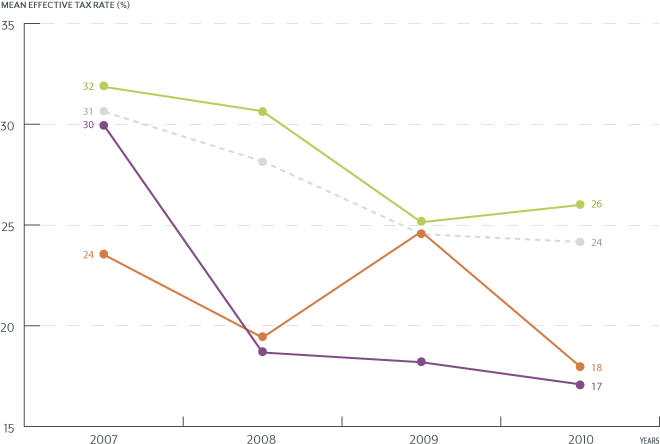 Moreover, we estimate that for the average company, each additional tax bill a company lobbied on since 2008 is associated with a lower 2010 tax rate of between 0.13 and 0.36 percentage points, depending on the statistical estimation (keep reading).

To conduct the analysis, we calculated the tax rate for all publicly traded companies on the Fortune 100 list for 2007, 2008, 2009, and 2010 using the Gupta-Newberry method. We also summed the reported lobbying on tax bills since 2008 for these companies.

The remainder of the publicly-traded Fortune 100 companies on average paid an average effective tax rate of 31.9 percent in 2007 and 26.0 percent in 2010, and 18 percent decline – not bad, but not as good as their more heavily-lobbying competitors on either the decline or the 2010 tax rate.

For the more data-oriented, read on for a slightly more in-depth statistical analysis.

The first figure below plots the total tax bills since 2008 as the x-axis and the effective tax rate these companies paid in 2007 as the y-axis. From this graph, it should be clear that there is no correlation between what companies were paying in taxes in 2007 and how much they would lobby on taxes in the future. (We’ve fitted a linear regression and a local smoothing line to the data to show the relationship in more detail.)

The next figure below shows the relationship in 2010. Now there is a clear correlation: the more tax bills a company lobbied on since 2008, the lower its effective tax rate is likely to be.

In a bivariate linear regression model (see model 1 below), the predicted effect is that for every additional bill lobbied on, a company will reduce its effective tax rate by 0.13 percentage points.

In the multivariate linear regression model (controlling for total spent on lobbying, total bills lobbied on, the 2007 tax rate the company paid, and including fixed effects for sector — see model 2 below) the effect of each additional tax bill on lobbying outcome appears to be even greater. It is associated with a tax rate decline of 0.36 percentage points.

This conclusion is in line with more extensive research done by Brian Kelleher Richter, Krislert Samphantharak, and Jeffrey F. Timmons, who concluded in a recent paper that “Increasing registered lobbying expenditures by 1% appears to lower effective tax rates by somewhere in the range of 0.5 to 1.6 percentage points for the average firm that lobbies.”

Certain caveats are obviously in order, the most important being that disclosure of bills lobbied on may not be consistent across companies. The analysis relies on voluntary disclosure forms, and companies may have different practices for disclosing specific bills. At best, the number of tax bills listed is only a proxy for how intensely companies are lobbying on tax issues. However, it is the best proxy available.

Second, this is far from a perfect correlation. The two companies who lobbied on the most tax bills (John Deere and Exxon Mobil) continue to pay quite high tax rates. In the scatterplots, they are two dots way above the regression line in the upper right hand corner.

Nonetheless, these trends do seem quite compelling, and highly suggestive. Companies that lobby extensively on taxes appear to be getting something quite substantial for their efforts.