This guest blog comes from Sunlight’s Organizing Fellow, Tamar Gurchiani, who is leaving us today after a wonderful three months to head back to her home country, Georgia. We’ll let Tamar (a lawyer, long time freedom of information advocate, and former TransparencyCamp scholar) speak for herself in the entry below, but first we have to note that we didn’t pay her (or even advise her!) to make the way-too-gracious statements below.

Now, enough about us. Keep reading to learn about the current state of transparency in post-Soviet Georgia…and what’s around the corner.

Can the classified information in one country be publicly available in another? Yes if the first country is post-soviet Georgia, where unlike the US, “in the face of doubt, still secrecy prevails.”

In March of 2010, the Georgian government refused to disclose the contracts between the Security Council of Georgia and several US lobbying firms (including Orion Strategies, Public Strategies, and the Podesta Group). The contracts were requested through the General Administrative Code (the Freedom of Information Law in Georgia) by the Georgian Young Lawyers’ Association, a non-profit I worked with before I came to the US to study law. During the litigation process, I was able to find the documents my country was hiding from us in the Sunlight’s foreign lobbying influence tracker.

At TransparencyCamp DC this spring, I finally met, in person, the Sunlighters who build those amazing tools for greater transparency. And, during the last three months, I had a wonderful opportunity to work with them — the most creative, professional and inspirational people I’d ever met in my life. I had a wonderful chance to see myself how technology can be used for the public interest and how big its impact is on every citizen’s life in the US.

But who is responsible for digitizing the official data and then make it available via the Internet in countries like Georgia? The government does not necessarily regard the Internet as basic infrastructure like roads, waste and water. From 2000 to 2010 the Internet usage in Georgia increased from 0.5 % to 28.3 %. Georgian freedom of Information legislation was enacted in 2000 but no legal obligation exists yet for online transparency.

Transparency communities can grow if the basic infrastructure is in place and they don’t have a constant fear that the government will shut them down whenever it needs to. They also grow when government makes public information available to the public without lengthy and expensive litigation process.

A few days ago, the Associated Press published a new study on Right to Know Laws. The study found that the newer democracies were in general more responsive than some developed ones. Before that, Access Info Europe and Centre for Law and Democracy conducted the Ask Your Government! 6 Question Campaign where France, with a 32 year-old FOI law, was among the poorest performing countries and Georgia, with only 11 years of experience, ranked as number two among the best performing countries.

In 2008, Georgia was among the first 12 countries that ratified the Council of Europe Convention on Access to Official Documents – the first legally binding international document recognizing access to information as a fundamental human right. Not to mention the other commitments my country has taken within the UN, OECD and GRECO frameworks.

Why are the countries like Georgia the first ratifiers of those conventions? Unfortunately the answer not always the healthy inclination to transparency, but a response to so-called collateral consequences (investments, international reputation etc.) Somebody might say that nothing is wrong if a country cares about its image. I would agree with that, but I’m sure for many of you the French example came as a surprise. If this is the “result” of good reputation, no, we cannot afford it.

But it’s up to us to make sure that these rankings translate into better practice.

With this goal, in May of 2012 more than 20 Georgian partners including Open Society – Georgia Foundation, Georgian Young Lawyers’ Association, Transparency International – Georgia, Institute for Development of Freedom of Information and Open Maps Caucasus will make TransparencyCamp Georgia happen. Representatives of the Georgian government and international donors, journalists, developers and civic activists will gather to find out where we are now, what resources and potential we have. TransparencyCamp Georgia will be a great meeting place for both the people who already know what should be done and the people who know how to do it by using technology.

TransparencyCamp Georgia was inspired by TransparencyCamp DC, the most impressive part of which, to me, was its setting. Will an “unconference” – an event run with a certain level of self-organization, audience-driven agenda, and voting for the each presentation topic – work in Georgia where most of the (even transparency themed) conferences mean long monotone (read: boring) speeches?

I’d been asking these questions to myself before my first meeting after Camp with Sunlight’s Laurenellen McCann. At this meeting Laurenellen revealed Sunlight’s secret of success: experimenting and learning by mistakes. Few months later, Georgian Vice Prime Minister Giorgi Baramidze said at Johns Hopkins University that “with mistakes and failures we [Georgia] are moving forward.” TransparencyCamp Georgia will be the experiment and test for moving forward to transparency. 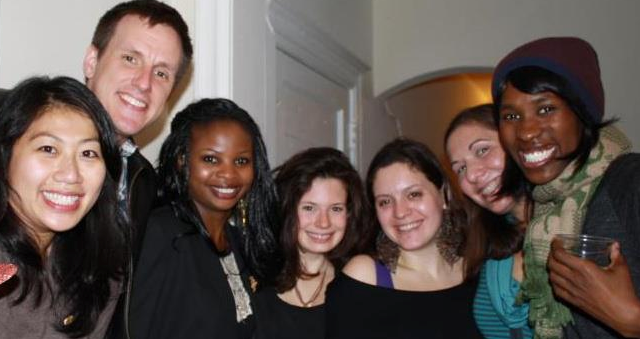 Sunlight’s Organizing Team: Wishing Tamar (second from the right) well in continuing her work back home.