The complaint claims that Bank of America, Wells Fargo, Citi, JP Morgan Chase and Co., and Ally Financial all committed violations of the state’s laws to protect consumer rights and damaged public records through faulty and fraudulent foreclosure proceedings, failing to modify home loans and the use of a system known as the Mortgage Electronic Records System (MERS).

Much of the outrage towards these banks and others stems from the money they received during the housing and financial crisis that began in 2008. All five of these banks received billions of dollars in emergency funds through the Troubled Assets Relief Program (TARP) to ensure their stability and keep them from failing. But now, after many citizens and politicians feel the banks haven’t reciprocated the concern the public and the government had for their financial troubles, they’ve found themselves in legal and political trouble, including this lawsuit.

The violations these banks are accused of committing come after a series of programs that were intended to help the banks help the people. Regularly, before and after those programs were put into place, these banks take part in influential tactics to keep their own bottom line on the minds of lawmakers and not necessarily the financial stability of the public through campaign contributions, lobbying and other less-expected and less-expensive ways.

According to InfluenceExplorer.com, contributions to candidates across the country affiliated with these five banks totaled nearly $14 million. However, only a rather insignificant portion of that money—$173,000—went to Massachusetts politicians. 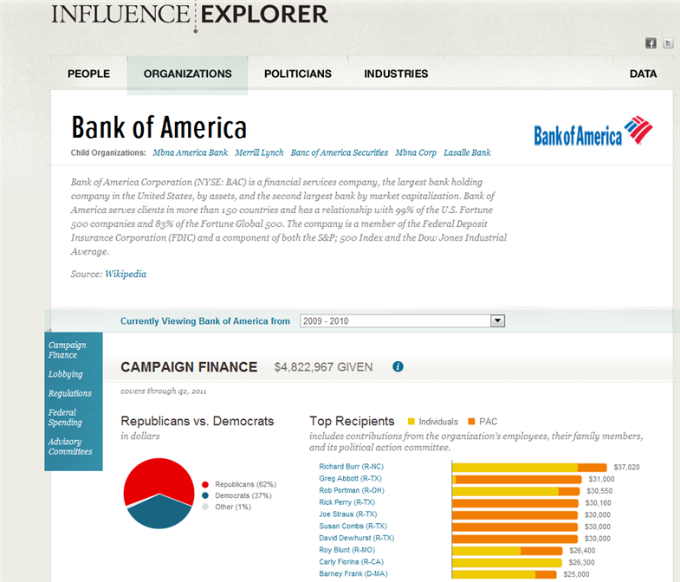 Also according to Influence Explorer, Bank of America’s political action committee and its employees and their family members gave $4.8 million to state and federal candidates during the 2009-10 election cycle. Massachusetts Democrat Barney Frank received $25,000 of that money.

BofA also lobbied heavily on a variety of bills related to finance and other issues, spending $7.4 million during those same two years. BofA frequently disclosed lobbying on the Dodd-Frank bill—officially known as H.R. 4173, The Wall Street Transparency and Accountability Act of 2010. Presumably, the banking giant spent a great deal of that money to influence the formation and implementation of this bill, which was intended to regulate many banking practices that had no formal regulation before and threatened to significantly lower the profits a bank could rake in. The goal of that bill, according to lawmakers, was to make sure the country would never see a financial crisis like the one recently experienced again.

According to Federal Advisory Committee Act data also displayed on Influence Explorer, as of 2011, Bank of America has five employees sitting on federal advisory committees. Those employees are in the position to advise various agencies on how to implement regulations and do business, usually doing so on issues that affect their own business matters. Walter Muller, the bank’s Chief Investment Officer, sits on the Department of Treasury’s Advisory Committee of the Securities Industry and Financial Markets Association.

JP Morgan is a big spender in Washington as well. During the 2009-10 election cycle, there were $3.4 million campaign contributions affiliated with financial company. There were also $13.4 million in lobbying expenditures reported. Like BofA, JP Morgan reported lobbying heavily on the Dodd-Frank Financial Reform bill.

JP Morgan doesn’t currently have any employees on any federal advisory committees, but did in 2010 when the company’s Executive Director of Environmental Affairs sat on an advisory committee with the Department of Commerce.

If you’d like more influence data about these two companies, or the remaining three being sued by Massachusetts—Well Fargo, Ally Financial (formerly GMAC) and Citi—you can visit InfluenceExplorer.com and TransparencyData.com.

Part of the lawsuit has been brought about because the attorney general Martha Coakley doesn’t believe the banks have adequately satisfied promises to modify mortgages and slowdown the rampant foreclosures happening in the state. For information on that issue, see the report we did on the Home Affordable Modification Program (HAMP), which is a funded through TARP.