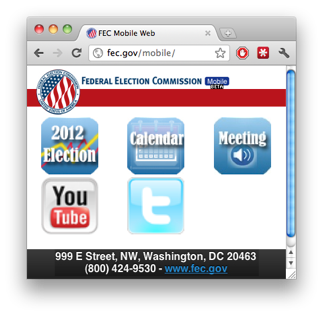 Last Friday the Federal Election Commission announced the launch of a new mobile interface. You should try it for yourself at http://fec.gov/mobile/. The site declares itself to be a beta, which I suspect you’ll agree is something of an understatement.

Let’s call a spade a spade: there’s no use pretending this is good. To begin with, there are obvious superficial problems: graphs lack units, graphics have been resized in a lossy way, and the damn thing doesn’t work on most Android devices.

Worse, there are substantive errors. Look at Herman Cain’s cash on hand. Why are debts listed as a share of positive assets? Look at the Bachman campaign’s receipts. Why is “total contributions”–which should reflect the entire pie–just a slice? (It’s not 50% because other slices seem to have incorrectly counted overlap, too.) Why don’t any of the line items below the graphs reflect the fact that some are components of others?

We asked the FEC for comment, but so far they’ve declined. Once the powers that be over there have a closer look, I’m confident they’ll agree that the mobile site is a mess.

It’s hard to know what to say about all of this. Part of Sunlight’s mission is to encourage government agencies to embrace technology more fully. We don’t want to send mixed messages by jumping down their throats when they actually try to do so. Sure, we gave FAPIIS a hard time, but that was because the site’s creators were obviously and deliberately undermining the idea of public oversight. By contrast, I don’t think anyone who worked on the FEC Mobile site intended to do a bad job.

And of course there’s a fundamental question. Obviously the bits that are relaying incorrect information are a problem. But assuming those get fixed, is a half-hearted attempt like this better than nothing? I suppose there might be some poor, twisted soul who will enjoy listening to FEC meeting audio while they’re at the gym (though frankly, if such a person existed I suspect they’d already be working here). But as a general matter it’s difficult to imagine anyone needing a mobile interface to a set of campaign finance data that’s as narrowly conceived as this one.

To their credit, it doesn’t seem as if this mobile interface was created at the expense of the organization’s much more important responsibility to publish data–a mission that, by and large, the FEC fulfills ably and with steadily increasing sophistication. There’s always room for improvement, but the truly pressing needs, like reliable identifiers for contributors and meaningful enforcement of campaign finance law, are beyond the reach of the organization’s technical staff.

Still, it’s a bit amazing to see obviously wrong numbers attached to a product that Chairperson Bauerly has been quoted as endorsing appreciatively. Among those of us concerned about America’s campaign finance system and the effect it has on our democracy, there is a sense that the FEC’s leadership does not take its mission particularly seriously. The release of shoddy work like this mobile site does little to dispel that impression.