In case you missed it, last night some-time South Carolina Presidential candidate and super PAC founder Stephen Colbert gave a great rundown of the new campaign finance landscape in our elections. Colbert and his team of very sharp writers have smartly illustrated just how out of control our campaign finance system is. In short, it’s crazy: A handful of billionaires pouring incredible amounts of cash is fundamentally changing what our democracy looks like. Colbert’s team doing a great job making sure this news gets outside the Beltway. Watch the video here:

As you’ll see above, Colbert makes the point that these billionaires are doing this out in the open. There’s a little bit of truthiness to that. Yes, super PACs disclose their donors, but there’s plenty we don’t know. That’s because the FEC has done absolutely no work to regulate this new influx of cash. And neither Congress nor the FEC has had the guts to require the real-time, online reporting that would give the public an actual sense of who’s trying to influence their votes. After all, we only just got the super PAC disclosures from last year (!) on Tuesday, and many of the crucial primary elections are already over — the Republican field is down to just a few left standing. It might have been helpful for voters in those early primary states to know just who was trying to influence them before they cast their votes. And although it’s great that we can name the top 22 donors, there may still be other billionaires who are funneling their money to super PACs through 501c4s, nonprofits which don’t have to tell anyone who their funders are.

Sunlight’s been working on this issue for a while, so we’ve got plenty of info if you’re interested. (Who doesn’t love a little campaign finance disclosure to spice up your Friday?) Our one stop shop for everything you ever wanted to know about super PACs but were afraid to ask is here: http://sunlightfoundation.com/superpacs/. We’ll be continuously updating that page, so make sure to bookmark it and come back.

We also have draft legislation that we think can solve many of the disclosure problems around super PACs, the SUPERPAC Act. We’re writing it out in the open (the way we wish Congress would write legislation) and we welcome your feedback to make it stronger. You can comment on any particular section or on the whole thing. Check it out: http://publicmarkup.org/bill/superpac-act/ 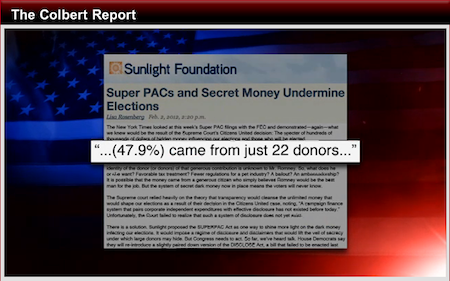 The SUPERPAC Act hasn’t been introduced, yet, but it certainly wouldn’t hurt for you to get in touch with your representatives and let them know they should be on the side of transparency, which they could do simply by introducing and/or cosponsoring this legislation.

You can also read more about it, like — Lisa’s blog post that Colbert showed on-screen and Lee’s analysis of the 22 donors that gave 48% of the presidential super PAC money (with fun charts!).

Our reporting group has also been spending some late nights going through the documents released Tuesday — and they’re the ones who are tracking the spending so we can give you detailed data.

Want to help shine a light on super PACs in your area? We’ve also got the super PAC sleuth project — you can check to see if there’s a super PAC in your area, take a picture, and upload it — and if you want to dig in even further, you can join our Little Sis group, too.

It’s not enough to hope that the 22 billionaires that we know about pick someone we like for our next president (or representative, or senator — super PACs aren’t limited to presidential contests). It’s up to us to demand transparency and make sure that everyone knows just who is trying to influence our elections.