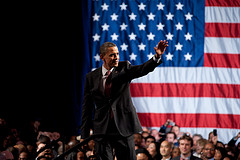 News in 2011 determined that in certain circumstances major bundlers ended up receiving appointments to key White House positions, invitations to White House events, and stimulus money awarded through contracts. This analysis required a high level of investigative journalism skill and a significant amount of time. It would not have been possible, however, without access to a number of data sources.

The iWatch analysis frequently returns to the story of Donald H. Gips, a Colorado businessman and bundler for Obama. His story provides a useful frame for illustrating the data sources that provided essential information for this piece.

The article states that Gips bundled over $500,000 for Obama in 2008.  Presidential candidates are not required to report their bundlers, but both Obama and McCain chose to do so in 2008. The Center for Responsive Politics makes available the list from 2008 as well as a list of 2012 bundlers for those candidates who have chosen to disclose. While the candidate usually only discloses the name of the bundler, CRP adds value by including additional information such as the total amount contributed, the name of the bundler, the city and state, and employer. The information also contains the total amount the bundler has contributed him or herself to the specified candidate since 1990. Bundlers are additionally broken down by industry. A search for Gips shows that he bundled over $500,000 in 2008 and has individually donated $32,391 since 1990.

After Obama won the election, the article states that Gips was put in charge of hiring in the White House and subsequently appointed as the U.S. ambassador to South Africa. The White House provides a searchable database of nominations and appointments that indicates the name of the nominee, the position and agency, the formal nomination date, and the date and result of the confirmation vote. Gips does not appear in that list, as his position did not require him to be appointed. A press release from Change.gov, Obama’s transition website, however, lists Gips among several other staff announcements. The U.S. Department of State provides a list of embassies, which can be used to find information about American consulates around the world, including the name of the current ambassador.

The article points out that Level 3 Communications LLC, where Gips was formerly vice president, was later the recipient of $13.8 million in stimulus funds. Information regarding the recipients of stimulus funds is available from three places:

The article also discusses bundlers receiving access to the White House, such as invitations to events or meetings. The Obama White House has voluntarily chosen to disclose the security records that detail those who enter the White House. These Visitor Logs have been criticized for a lack of accuracy and completeness, but can be valuable for use in analyses such as the iWatch report. The records show 18 visits by Gips to the White House between August 17, 2009 and April 1, 2011. Among the 18 are two trips to see the president and various trips to other White House staff such as Jenny Cizner, who works in the Office of Presidential Personnel, and Valerie Jarrett, a senior advisor to the president.