(This post was prepared in collaboration with Dan Drinkard)

Congress now speaks at almost a full grade level lower than it did just seven years ago, with the most conservative members of Congress speaking on average at the lowest grade level, according to a new Sunlight Foundation analysis of the Congressional Record using Capitol Words.

Of course, what some might interpret as a dumbing down of Congress, others will see as more effective communications. And lawmakers of both parties still speak over the heads of the average American, who reads at between at 8th and 9th grade level.

Today’s Congress collectively speaks at a 10.6 grade level, down from 11.5 in 2005. By comparison, the U.S. Constitution is written at a 17.8 grade level and the Declaration of Independence at a 15.1 grade level. The Gettysburg Address comes in at an 11.2 grade level and Martin Luther King’s “I Have a Dream” speech is at a 9.4 grade level. All these analyses use the Flesch-Kincaid test, which equates higher grade levels with longer words and longer sentences. 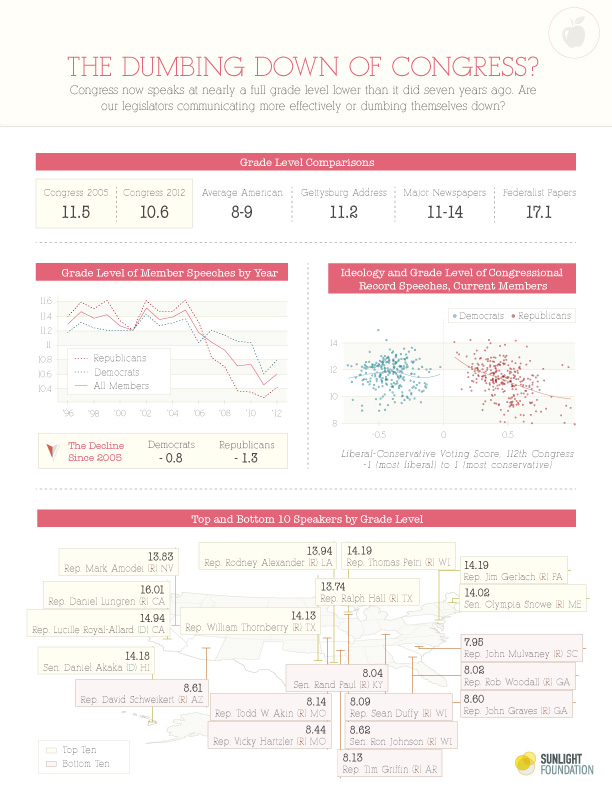 In looking at the data more closely, a few other important patterns jump out:

For more detail on these and other findings, as well as a more complete methodology, you can find the full analysis here.

To see which top SAT words come up most often in the 112th Congress – and who speaks them most often, click here.

So what does it all add up to?

Earlier this year, when the University of Minnesota’s Smart Politics noted that Obama’s 2012 State of the Union address clocked in at an eighth-grade level for the third year in a row, and that Obama’s average grade-level of 8.4 was well below the average of 10.7 for the previous 67 addresses, Fox News ran the story alongside the image of a child in a dunce cap, and right-wing blogs mocked the President’s intelligence.

Others pointed out that maybe speaking clearly was a good thing. After all, the SOTU speech was pretty much right at the level of the average American’s reading level. And writing gurus like George Orwell (“If it is possible to cut a word out, always cut it out”) and Strunk & White (“omit needless words”) famously advise simplicity.

But whether you see it as plainspeak or you see it as a dumbing down, the data are clear: The overall complexity of speech in the Congressional Record has dropped almost a full grade level since 2005. And those on the political extremes, especially those on the far right, tend to have the most simple speech patterns.

Updated May 22, 2012: The graphic above originally misidentified Mississippi as Arkansas.