The day after TransparencyCamp, Sunlight joined the good folks at the Voting Information Project to host a hackathon. It was a perfect opportunity: Thanks to TCamp we had the space and some smart folks from out of town; and thanks to VIP, we had a store of new, important and under-utilized data.

It’s worth emphasizing that last point. The work that VIP has been doing over the past couple of elections is difficult but very important. Despite being obviously fundamental to democracy, information about where and when to vote and who’s on the ballot is surprisingly scattered and unstandardized. VIP works with secretaries of state and other election authorities to organize, standardize and publish this information in a way that’s actually usable.

And using it was exactly what the hackathon was about. Fueled by the traditional mix of bagels, coffee and frankly disgusting quantities of soda, a number of teams came up with valuable ways to share this data. A few highlights: 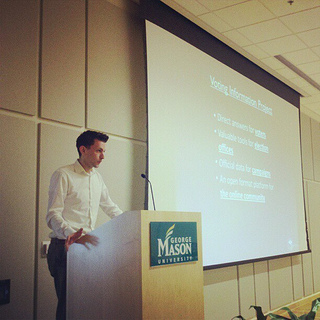 * Taking an approach similar to the crowdsourced data collection of flyontime.us, one team whipped up an impressively polished mobile site to let voters report on the wait time at their polling place.

* Also in the mobile space, Google’s David Sedano lent a hand to the folks behind the Cost of Freedom Project, which helps citizens navigate voter ID requirements. You can read CoF’s work on an SMS interface here; David helped to lay the groundwork for a smartphone-ready webapp.

* Another team tackled an interesting real-world challenge: creating multilingual posters to help direct people to neighborhood polling places. The project combined an interesting set of GIS and internationalization challenges. They’re still working on getting the project live at gotvposters.com, but, in the meanwhile, you can check out their code on GitHub here.

Above: Matt Morse, of the Pew Center on the States, addresses the crowd at the VIP Hackathon, held April 30, 2012 at George Mason University’s Arlington Campus. Photo credit: Laurenellen McCann