All 17 Democrats who sided with Republicans in Thursday's House vote to cite Attorney General Eric Holder in contempt of Congress have received contributions at some point in their careers from the political action committee of the National Rifle Association, which was lobbying hard to pass the resolution. 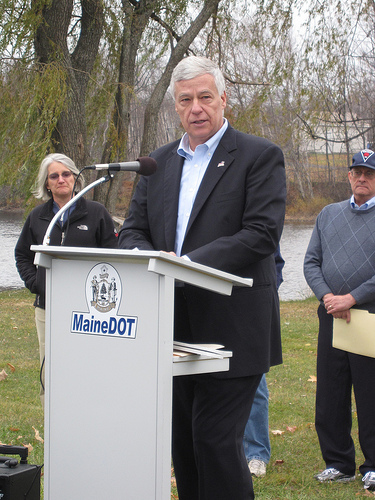 The Democrats who receive the most money from the NRA's PAC and also face competitive races were even more likely to side with the NRA. Of the eight Democrats in tight races in November that have received the most from NRA's PAC (see a chart of these lawmakers in our earlier story, where we talked about this possibility), seven voted to hold the attorney general in contempt. Only one–Mike Michaud of Maine–voted against the contempt motion. He's seen in the photo at right.

Here is a table of the 21 Democrats who have received the most money since 2003 from NRA's PAC, and how they voted yesterday, according to an analysis of Influence Explorer data. 12 of them voted to cite Holder for contempt. Only four of the Democrats who are up for reelection voted against the measure. Another three–Reps. Sanford Bishop of Georgia, and Joe Baca and Dennis Cardoza, both of California–did not vote on the resolution. Bishop is a member of the Congressional Black Caucus and the other two belong to the Congressional Hispanic Caucus. Both caucuses boycotted the vote in protest. Though the three did not vote, they asked the administration to cooperate more fully with Congress on the "Fast and Furious" issue earlier this month.