Rep. Blake Farenthold, R-Texas, deleted tweets he sent over the weekend detailing various stops in Slovakia, and his office is refusing to say why he's there or whether he's on official travel or vacation. 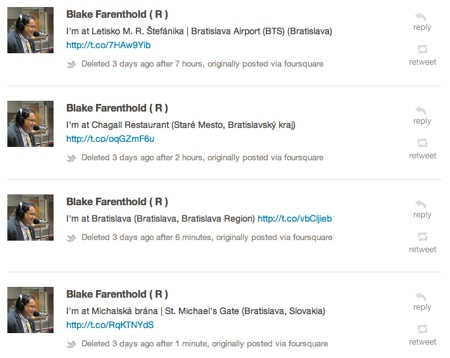 The congressman's tweets, posted to his official account on Saturday, temporarily revealed his locations in the Eastern European country's capital of Bratislava, such as the historic site of St. Michael's Gate, a dining establishment serving "international cuisine" and the Letisko M. R. Štefánika Airport.

The congressman called the posts "tweetspam" in an apology to his followers for spamming. According to that post, his Twitter account was  automatically linked to FourSquare, another popular social media that has a smart phone app allowing users to "check-in" at certain locations.

Though he deleted his Four-Square-generated tweets from Europe, Farenthold left  FourSquare-connected tweets from last Friday untouched. They showed he was in the House floor and the Rayburn House Building.

The expunged posts were captured by Sunlight's Politwoops, a website that archives poilticians' deleted tweets.

When Sunlight contacted Farenthold's office, his press secretary wrote in an e-mail that "it is our office policy not to comment on ongoing congressional travel."

So it wasn't clear whether the congressman was in the country or not when his office on Monday issued his statement regretting the headline making raid on his sister's Corpus Christi home. A local SWAT team found drugs and firearms. Sue Farenthold was one of the four people arrested and charged with "possession of controlled substance," according to the Corpus Christi Police Department website. FEC records also show that his only sibling donated the maximum of $4,800 to Farenthold's 2010 congressional campaign, which resulted in an upset victory over veteran Democratic Rep. Solomon Ortiz.

The one-time radio personality's surprise victory came on the strength of a wave of Tea Party support and despite the appearance, late in the campaign of photos showing him wearing pajamas with yellow ducks design and a young woman in lingerie by his side. Despite his narrow victory in his first race, he may have an easier time this year thanks to a redistricting process that left him representing more Republican-leaning territory.

The Tea Party Republican is a step-grandchild of Sissy Farenthold, a celebrated feminist and Democratic  activist who almost became the runningmate of 1972 Democratic presidential nominee George McGovern.