Political irony: That's probably the best definition for what happened Monday when when Sen. John McCain, R-Ariz., probably the only GOP lawmaker to express interest in the Disclose Act, rallied Michigan on behalf of GOP presidential hopeful Mitt Romney, who has turned his back on requests to be more open with his campaign finance. 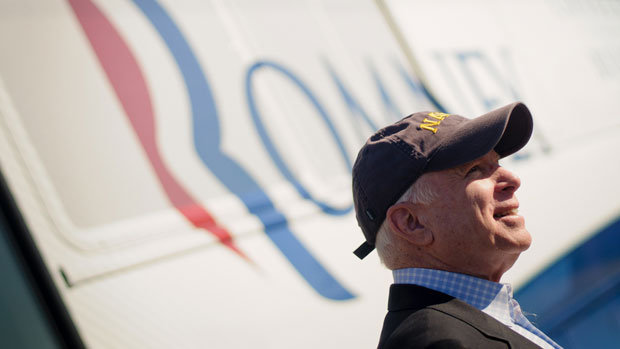 McCain is the father of modern campaign finance reform. He was the coauthor of the Bipartisan Campaign Reform Act of 2002, popularly known as the McCain-Feingold Act. And he hasn't been shy about criticizing this year's conduits for big money, even if it benefits his candidate. He was one of the few Republicans who didn't dismiss the Disclose Act out of hand, although in the end, the bill's sponsors moved ahead without his support.

But the senator's passion for disclosure and finance reform hasn't diminished his support for Romney, who appears to be his opposite on this issue. At the same time McCain was stumping for Romney in Michigan, the Sunlight Foundation, along with other transparency groups, started a petition calling on Romney to release information about his finances, especially as it pertains to his campaign bundlers.

As the name implies, bundlers collect money from various sources, friends, family, coworkers etc., and wrap it all in a neat little package to present to the campaign of their choosing. While individuals have federal limits as to how much they can contribute to a campaign, bundlers have no such limitations. By law, candidates are expected to release a certain amount of bundlers and Romney has disclosed but the minimum required.

So far, Romney has disclosed the names of just 25 bundlers — the ones he's legally required to name because they are lobbyists. Call it a wild guess, but Sunlight (along with the other groups) suspect there are far more fundraising on the GOP candidate's behalf.

You see, anyone can be a bundler and Romney (as well as many other politicans, to be sure) encourage the practice.. One need only go to Romney's campaign website and click on the "Fundraise" link. You'll be prompted to create a link and start a fundraising campaign to share with friends.  And the campaign clearly has a system for keeping score, asking online bundlers to use a unique ID to track their contributions.

Other interesting things to be noted:

On a conference call Monday, Romney campaign officials once again declined to identify the bundlers funnelling checks to the GOP candidate.