Mexico’s President-elect, Enrique Peña Nieto, who takes office December 1, has hired lobbying firm Chlopak, Leonard, Schechter & Associates to represent him in Washington. According to documents filed with the Department of Justice (DOJ), the contract focuses on U.S. outreach and “monitoring of news and policy developments related to Mexico-U.S. interests.” 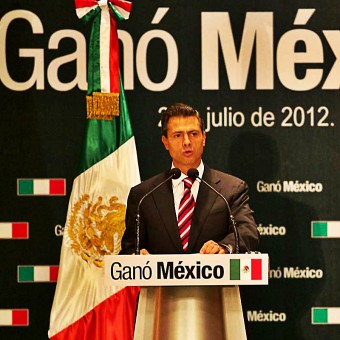 So far, six lobbyists with the firm have filed paperwork confirming they will work as part of the Peña Nieto account.

The question is whether Peña Nieto, seen at right, should have filed sooner. This may not even be the first U.S. media push on behalf of Peña Nieto, by the Institutional Revolutionary Party (PRI), which the 35-year-old lawyer returned to power when he won the July 1 presidential election. Paperwork filed in a lawsuit earlier this year alleges that the PRI contracted for $56 million worth of campaign advertisements for Peña Nieto to be broadcast on Spanish-language stations in the United States.

Foreign political parties that produce propaganda or fundraise in the United States are required to register with the Department of Justice's Foreign Agent Registrant Act (FARA) unit but it does not appear that the PRI did.

Mexico has a considerable lobbying and public relations operation in the U.S. as reported by the DOJ to Congress. Among the Mexican organizations that have hired lobbyists: Mexico’s other main political party– Partido Accion Nacional; the Embassy of Mexico; Mexico City; Mexico's departments of agriculture and economics, the Mexican energy company Pemex and the Mexican Visitors Board. The report shows these groups spent over $2 million on lobbying and PR in the last half of 2011.