House Republicans are on an anti-Dodd-Frank blitz, but with a populist twist, leading up to the financial reform law’s second birthday later this week.

The Republican-controlled Financial Services Committee has launched an "online survey," which asks users a series of questions about how Dodd-Frank affects “you, not Wall Street.” The survey comes as the committee has scheduled a half dozen hearings over a two-week period focusing on such topics as Dodd-Frank's impact on home mortgages, consumer choice, and access to credit and municiple finance.

We'll be covering one of those hearings — titled "Who’s In Your Wallet? Dodd-Frank’s Impact on Families, Communities and Small Businesses” — via our award-winning Sunlight Live platform Thursday at 10 a.m. 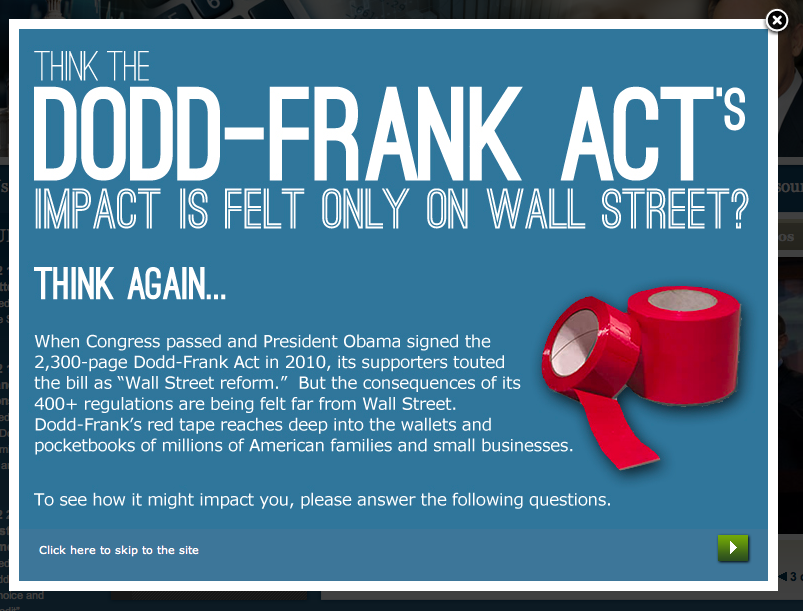 The “online survey” — an unusual tool for a congressional committee website — asks 10 politically loaded questions about the financial reform law, provides the same answers regardless of how the person answers, and then asks viewers to post the survey to Facebook and Twitter. Our research shows it doesn't appear to have gained much traction there.  Several of the questions mirror major lobbying battles that have occurred in the course of implementing the financial reform law.

For example, the first question asks “Do you purchase food for you or your family?” In the “answer" section, the committee quotes a Chicago Mercantile Exchange executive saying that food producers such as Kraft and Kellogg would be subject to limits on how they could hedge risk on the commodities markets.

The survey was not designed to collect information from the public, committee spokeswoman Marisol Garibay acknowledged in an email to  Sunlight. “We have always worked to demonstrate how Dodd-Frank’s impact reaches beyond Wall Street and we have always tried to make the website interactive," she wrote. "This is a tool to be both.” She pointed to other interactive features on the website such as one that allows the viewer to submit questions for members to ask at a hearing.

The Coalition for Derivatives End Users — which will send a representative to testify at the hearing Sunlight will be covering live — counts as members major trade associations such as the U.S. Chamber of Commerce, the National Association of Manufacturers, and the Real Estate Roundtable. The coalition has been advocating against the Dodd-Frank law on just these grounds — that businesses should be free of regulation while hedging risks — both in Congress and at the Commodity Future Trading Commission (CFTC).

Freshman Rep. Michael Grimm, R-N.Y., a member of the Financial Services Committee, has introduced H.R. 2682, supported by the coalition, that would provide exemptions from the Dodd-Frank law. Those exemptions were passed by the House in March. The real estate industry is a leading source of funds for Grimm’s campaign and leadership PAC.

According to the committee's website, the goal of tomorrow's hearing, titled “Who’s In Your Wallet? Dodd-Frank’s Impact on Families, Communities and Small Businesses,” is to examine “how the 400-plus regulations required by the Dodd-Frank Act will impact the lives of virtually every American.”

Presiding over the hearing will be Rep. Randy Neugebauer, R-Texas, the chairman of the Financial Services panel's subcommitee on oversight and investigation. Neugebauer is the recipient of nearly $450,000 in campaign donations from industries regulated by Dodd-Frank.

Neugebauer describes the Dodd-Frank act on his website as a “pile of burdensome regulations.” He writes that “this new bureaucracy will cost taxpayers billions of dollars just to implement, and threaten to take trillions of dollars out of the economy once implemented.” The congressman has been critical of the newly minted Consumer Financial Protection Bureau, a central part of the Dodd-Frank law, arguing that its funding, which now comes from the Federal Reserve system, should be a part of the regular appropriations process.

Among the top 20 industries contributing to Neugebauer, the financial sector accounts for nearly half of his campaign contributions, and at least 13 of his top 20 donors come from individuals and companies regulated by the Dodd-Frank legislation.

Neugebauer has received campaign contributions from companies and groups that have lobbied to weaken the Dodd-Frank law and regulations including: JP Morgan, Bank of America, Goldman Sachs, the Securities Industry and Financial Markets Association and American Bankers Association.

So, join us Thursday at 10 a.m. ET as we provide more real-time reporting and analysis on the Financial Services Committee's look into Dodd-Frank.