The college student whose super PAC helped propel a little-known Kentucky Republican to victory with $600,000 in outside spending has doubled down — and then some. 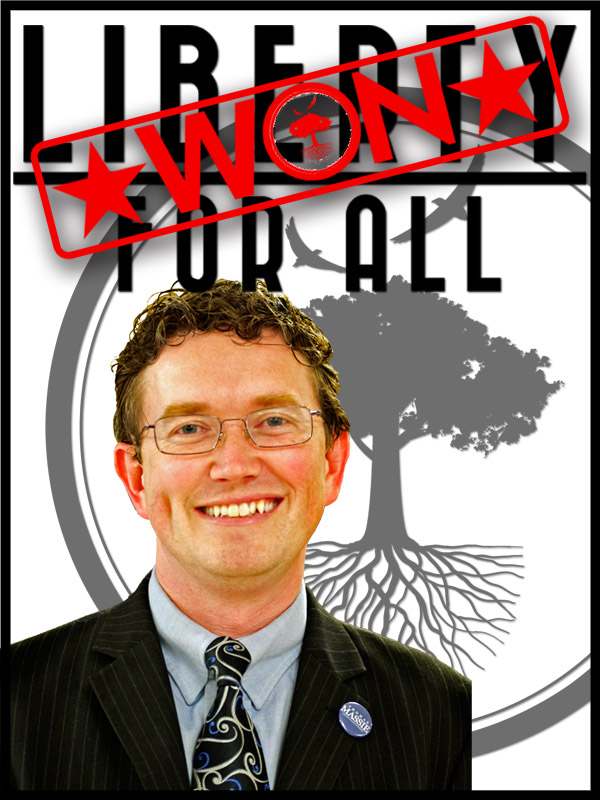 John Ramsey, a 21-year-old devotee of Rep. Ron Paul, R-Texas, gave just over $1.7 million to the super PAC he founded, Liberty for All, in the second quarter, according to campaign finance records filed Sunday. That brings Ramsey's total contributions to about $1.9 million–meaning that the economics and finance major at Stephen F. Austin State College in Nacogdoches, Texas is the source of all but about $10,000 of the super PAC's fundraising to date. As of June 30, Liberty for All had about $730,000 in the bank.

Some of the group's money has gone for campaigns, like the one that propelled political rookie Thomas Massie, an MIT-educated engineer seen at right in an image on the super PAC's website, to a surprise victory in a Kentucky GOP congressional primary earlier this year.

But a significant sum has also gone for salaries.  Ramsey's super PAC has lately staffed up with veterans of Ron Paul's presidential campaign. That's just the start though: campaign spending reports list more than 40 people paid as grassroots consultants since the start of April at a total cost of more than $134,000. Add in management and IT consultants and the PAC's spent more than $220,000 on consultants in the three month span from April through June alone.

Kate Schackai, one of the Ron Paul vets who's joined the super PAC as press secretary (but appears in campaign finance reports as a grassroots consultant), said the campaign is working within categories the FEC allows, but that more descriptive titles would appear in the next report. About the number of employees, she added by email that the "Kentucky race was very competitive, and our goal was to make our first project a big win."

Schackai was coy about who the PAC would be backing next and declined to name any specific candidates. "We want to let our work speak for ourself," she said.

Besides Massie, the only other candidate the PAC has endorsed is running for constable in Travis County, Texas (home to Austin): Mike Cargill, who the New York Times described as "a gay, black gun store owner". Cargill, who calls himself a "lifelong Democrat," faces a runoff July 31.

Liberty for All's continuing activity is in contrast to the two better-known Ron Paul super PAC's: Endorse Liberty and Revolution PAC, both of which spent hundreds of thousands of dollars backing Paul's bid for President, but haven't spent on behalf of other candidates.