Today a federal tax official provided House Ways and Means Committee members some details about how the Internal Revenue Service will review whether the political activities of shadowy nonprofit groups conflict with their exempt status.

The answer: slowly, according to the IRS Deputy Commissioner for Services and Enforcement Steven Miller, one of the witnesses at the hearing.

He said the IRS has decided to consider whether it would issue new guidance to the groups. And if the agency investigates groups, it looks at an entire year's worth of activity before determining whether an organization has violated tax laws, Miller said. Social welfare organizations, or 501(c)4s, can engage in political activity as long as that's not the group's primary purpose, which should be promoting some kind of social good. 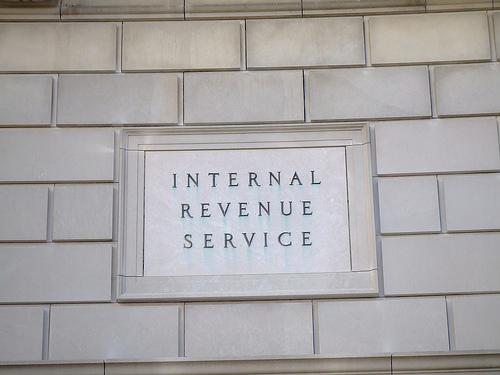 That means that even if a nonprofit group–like Crossroads GPS, a 501(c)4 organization linked to super PAC American Crossroads–is focused on running political ads for a few months, if for the rest of the year it is not, it might be in the clear.

The issue has been a prominent one for watchdog groups claiming that nonprofit groups that are set to spend hundreds of millions of dollars on the 2012 election are acting illegally. In the current election cycle, most of the politically active 501(c)4 groups have supported GOP candidates, but some complaints have involved Democratic-leaning ones.

The Campaign Legal Center, a campaign finance reform group, praised the IRS earlier this week for saying it would “consider proposed changes” in tax-exempt status eligibility requirements. The group, along with Democracy 21, another watchdog, first asked the IRS to clarify the rules a year ago.

At today's hearing, Rep. Xavier Becerra, D-Calif., asked Miller if the IRS used a "bright line" test to determine whether a group was primarily engaged in political activity. Many campaign finance lawyers interpret IRS rules to bar 501(c)4 groups from spending more than 49 percent of their funds on political activity.

But Miller said it's a qualitative, not a quantitative test; the general rule is that the groups must be “primarily engaged” in social welfare. In evaluating groups, the IRS looks at many factors, such as how much money is being spent on political activity and what infrastructure is dedicated to it, he said.

Another witness, campaign finance expert and business law professor Donald Tobin, said the IRS is in a difficult position to enforce the rules.

There is a whole set of 501(c)4 organizations that “in my view are actually 527s,” the section of the tax code for political committees including campaigns, parties, political action committees and super PACs, Tobin said.

“We’ve put the IRS in charge of policing” without the tools it needs, he added. The agency does not have the resources to engage in large-scale audits of tax exempt groups and is accused of being politically motivated when it does, his written testimony declared.

Tobin suggested some reforms. In particular, he said that complaints to the IRS and its audits should be brought into public view so that everyone can see that these are objective, not politcally motivated, investigations. Right now, tax-exempt social weflare organizations are subject to private audits and there is no requirement that the agency look at a request when it comes in. In contrast, the Federal Election Commission has a public complaint system.

The hearing was led by oversight panel Chairman Charles Boustany, R-La. At one point, he encouraged his colleagues to keep the focus of the hearing on the less controversial 501(c)3 public charities, rather than the 501(c)4 groups, saying there would be time to address those entities at a later date. But Democrats, who have been keen to make hay of the shadowy nonprofits, continued asking witnesses about the 501(c)4s.