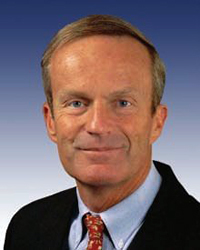 Sen. Claire McCaskill, D-Mo., and Democratic outside groups, pouring in over $1 million during Missouri's Republican Senate primary, got the guy they wanted: Rep. Todd Akin, who Tuesday upset two other Republicans to take the GOP nomination.

Recent polls have shown McCaskill trailing all three Republicans in head-to-head matchups, but Akin has the smallest edge. She is betting voters will see the six-term congressman — who gave "thanks to God our creator" in his victory speech and has been endorsed by former Arkansas Gov. Mike Huckabee, an evangelical Christian — as too conservative.

Late in the primary, McCaskill hit TV and radio airwaves "criticizing" Akin, seen at right, as too conservative, a thinly veiled attempt to boost his chances in a primary where the GOP's right wing would have a disproportionate impact. The radio ad was paid for by the Democratic Senatorial Campaign Committee.

Though Akin did not have direct support from outside groups, he may have benefitted from the last-man-standing effect: Of all the outside groups targeting ads at GOP candidates that have been reported to the Federal Election Commission, 88 percent focused on attacking Akin's opponents: businessman John Brunner and former state treasurer Sarah Steelman. The biggest outside group has been Majority PAC, a  super PAC devoted to maintaining the Democrats' edge in the Senate. Majority PAC spent nearly $1.2 million in independent expenditures opposing the frontrunner Brunner, widely viewed as the biggest threat to McCaskill because he had the most centrist credentials of the GOP frontrunners as well as a personal fortune to invest in the race. A super PAC formed by Steelman supporters chipped in about $500,000 in anti-Brunner ads.

Overall, the race has attracted the fourth most independent expenditures of any Senate race in the country, according to Sunlight's Follow the Unlimited Money tracker, more than $3.7 million, a number certain to go up as November approaches, as McCaskill is a top GOP target. And that figure doesn't include spending that's not reported to the Federal Election Commission for television ads but for which we are beginning to see partial returns.

Some journalists, citizens, and a government agency have been gathering the political ad buys collected at TV stations and posting them online. As of last week, the four biggest TV stations in the nation's 50 biggest markets have to post information on political ad buys on a Federal Communications Commission website. But the FCC ruling only requires reporting of ads beginning Aug. 2, leaving out much of the spending on in Missouri, where voters have been carpet-bombed over the airwaves.

The FCC's new portal only covers the state's two biggest markets (St. Louis and Kansas City), and it is far from perfect. For example, Kansas City's local NBC affiliate filed an ad buy that was actually for the lieutenant governor's race under a folder for Now or Never PAC, the Sarah Steelman-backing super PAC.

The limitations of the data in Missouri highlight the motivations behind the Sunlight Foundation's Political Ad Sleuth project. Sunlight and its partners, led by FreePress.net, have been asking volunteers to help sort this newly posted information and go to their local stations to retrieve the political ads at stations not covered by the new rule.

In the St. Louis and Kansas City television markets, ad buys posted in the Senate race — the earliest from mid-July on —  total $861,246.

On St. Louis's NBC affiliate, the Chamber of Commerce dropped $159,450 to run ads from July 27 to Aug. 7 criticizing both McCaskill and Steelman. The Karl Rove-founded Crossroads GPS, which has been running anti-McCaskill ads, bought about $100,000 on the same station to run from today through Aug. 21.

Overall, the Senate race spending posted by stations in the two markets in recent weeks comes to:

Brunner's lead reflected his well-stocked, self-funded campaign: He spent nearly $7 million of his own money. He was on the airwaves long before Akin and and Steelman, who only started running ads in mid-July, according to Matthew Patane, the journalism student coordinator of Project Open Vault.

The mid-Missouri project has been categorizing all the TV ads that have run since January in the Columbia, Mo. television market, the state's fifth biggest.

The effort, run by a Professor David Herzog at University of Missouri's Journalism School, demonstrates how much political spending has been going on under the radar, in the form of ads that did not have to be reported to the Federal Election Commission because they were categorized as "issue" ads rather than "political" ads — a distinction determined by whether or not the ads clearly identify a candidate and call for a vote for or against that person. The University of Missouri project has identified a whopping $2.4 million in political TV ad spending–more than 4,000 minutes of ad time–from January through late July–not including the most recent onslaught in ads, which Patane is still entering into the project's database. That number includes about $350,000 from the McCaskill campaign and $280,000 from the Brunner camp, campaigns required to disclose their donors and ad purchases.

Project Open Vault–which mirrors the national effort that Sunlight is undertaking with Political Ad Sleuth, also identifies shadow groups spending a combined $300,000 in mid-Missouri: the pro-Republican Crossroads GPS and Americans for Prosperity, 501(c)4 "social welfare" groups that do not have to publicly disclose donors–or any spending that does not qualify as expressly political under FEC guidelines. Crossroads has hammered McCaskill with at least nine separate advertising campaigns since last year, which the group announces on its website. AFP announced an anti-McCaskill ad in late July.

Patane spends more than 18 hours per week gathering the files from Columbia's three main stations and uploading them onto Document Cloud, which feeds into a database they created, he said.

This week alone, he found 100 pages of buys from one station, and 30 or 40 at the other two stations. He called the data "only a small window" of the rest of election spending in the Show Me State, which is a presidential battleground as well as the home to one of the nation's marquee Senate races. TV stations in Columbia will not be required to post their political files to the FCC portal until 2014.

Herzog, the professor behind the project, has been advocating for more transparency of election spending, even filing comments with the FCC.

"I'm a big advocate of getting information out of obscure places to places where people can actually use this information," he said.