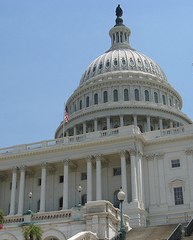 They benefit from Washington fundraisers held at lobbying firms that represent bailed out companies and banks as well as the special interests that cut deals with Obama administration to support health care reform. They vote with their leadership on symbolic bills that have no chance of becoming law, but send election-year messages to single issue voters. Many have sponsored bills that provide tax breaks for a single company (often a campaign contributor), while others have launched caucuses to represent special interests. They tout projects in their districts made possible by federal largesse.

They’re the House freshmen class that rode an anti-incumbent wave to Washington, promising to end business as usual on Capitol Hill. But a Sunlight analysis of their fundraising, proposed legislation, press releases and other data shows that the 89 new members–some 20 percent of the body–that took their oath of office for the first time on January 5, 2011, have much in common with their predecessors:

Incumbent advantage: Through the second quarter of 2010, the 89 challengers who would go on to win in November collectively raised $54.6 million. Through the same period in 2012, they’d raised more than twice as much, about $120 million.

Lobbying access: The freshmen have held fundraisers at lobbying shops and townhouses of companies with significant interests before the federal government. And some have done legislative favors for special interests. For example, 26 freshmen introduced some 224 miscellaneous tariff bills–reductions in the taxes that companies that import goods must pay.

Follow the leaders: On largely symbolic votes pushed by the congressional leadership, some 90 percent or more of freshmen lent their names as cosponsors to bills that had little chance of becoming law, including bills to repeal the Patient Protection and Affordable Care Act, place limitations on abortion, and one that would require the government to mint coins celebrating the Pro Football Hall of Fame. Some 78 freshmen cosponsored the latter bill, including five Democrats.

Special interest advocacy: Freshmen members joined, or in some cases started, caucuses to promote the interests of particular industries, products or contractors. One freshmen member, Rep. Rick Crawford, R-Ark., co-founded both the Congressional Chicken Caucus and the Congressional Rice Caucus in the 112th Congress.

These and other findings will be detailed over the next two weeks, as the Sunlight Reporting Group rolls out a series of analyses, stories and posts profiling the freshmen of the 112th Congress. Dan Drinkard Lee Drutman, Breanna Edwards, Jake Harper, Becca Heller, Kevin Koehler, Kathryn Lucero, Anupama Narayanswamy, Ryan Sibley, Nancy Watzman and Lindsay Young contributed to the reporting and research.

Despite their reputation for rocking the boat, the freshmen class elected in 2010 appear to have fit the mold more than broken it; 52 of them had previous elective or government experience, with 38 having served in a legislative body. The House of Representatives counted 150 members who disclosed assets and liabilities that added up to more than a minimum of $1 million, the freshmen accounted for 11 of them.

Like their more established colleagues, they are raising money from political action committees, including those organized by groups that lobby the federal government. As challengers, they collectively raised $14.9 million from such PACs over the entire 2010 election cycle. As incumbents, and with some of the biggest fundraising months yet to be reported, they’ve almost doubled that, raising nearly $30 million.

Nor are freshmen strangers to K Street–in fact, they’ve often gone there to raise money. Rep. John Runyan, R-N.J., a former offensive lineman for the Philadelphia Eagles, benefited from a fundraiser held at the offices of BGR Group, which represents, among others, Pharmaceutical Research and Manufacturers of America, one of the biggest supporters of the Affordable Care Act. The law and lobbying firm of David & Harman held a birthday reception for Rep. Jeff Denham, R-Calif., at their D.C. offices a few blocks from the White House; the firm count Troubled Asset Relief Program beneficiaries General Motors and Lincoln National Corp. among their clients. And Rep. Tim Huelskamp, R-Ark., who got a 100 percent voting score on “limited government” issues from the conservative Club for Growth, had a breakfast fundraiser at the offices of Alston & Bird, which lobbies for, among others, the American Hospital Association, another backer of the health care reform act.

In some ways, Huelksamp is emblematic of the conflict between rocking the boat and representing a district. In June 2011, while visiting the Siemens Wind Nacelle factory in Hutchinson, Kan., the freshmen Republican, who received a 100 percent score on his voting record from the anti-big government Club for Growth, highlighted all the jobs the private business will create and promising more to come.

“The industrial diversity of the First District of Kansas continues to amaze me,” a press release issued by his office quoted him as saying. “Learning that this new plant is projected to create 400 jobs in Kansas is definitely welcome news, and we must find ways to make sure that other job creators have the confidence and assurances they need to expand their operations, too.”

True to small government creed, Huelskamp added that, “Employers in other parts of the state have told me time and time again that what they need from Washington is more regulatory, economic, and tax certainty; I will continue to work for that as their representative in Congress.”

Left out of Huelskamp’s press release was just how the Siemens Wind Nacelle plant came to be located in Hutchinson. The Economic Development Administration, part of the Commerce Department, spent $1.7 million of funds from the American Recovery and Reinvestment Act–President Obama’s stimulus bill–to build the facility Siemens chose as its factory. The stimulus will also improve rail access to the site.

Huelskamp’s constituents are pressing him to do more for the local wind energy industry. Tax credits to support wind power are set to expire at the end of 2012. Despite being pressured by the former head of the Hutchinson/Reno County Chamber of Commerce, Huelskamp indicated opposition to energy subsidies that end up distorting the market. Earlier, however, he did tell the Wichita Eagle that “We need to make sure such phase-outs are strategic and as seamless as possible.”