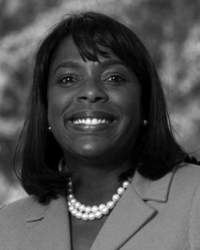 Rep. Terri Sewell, D-Ala., the first black woman elected to Congress from Alabama, is the president of this year's small Democratic freshmen class. Those nine freshmen, dubbed the "noble nine" by supporters, elected the Harvard-educated lawyer as the leader of a small, but diverse class that includes four women, four African Americans and one openly gay member and one who identifies as Buddhist.

After winning her first House term with 73% of the vote in Alabama's 7th Congressional District, Sewell established herself as a reliably liberal vote. She supported the president's health care bill as well as two major transparency initiatives, the STOCK Act , which requires members of Congress to reveal information about financial transactions, and the DISCLOSE Act, a failed effort to force political advertisers to reveal the names of top donors within the commercials they air.

A member of House Committee on Science, Space, and Technology, as well as the Committee on Agriculture, Sewell has received more than $74,000 from the farming sector. However, Sewell's largest single contributions have come from the financial and legal sectors. Sewell's former colleagues at the Alabama law firm Maynard, Cooper & Gale are collectively her biggest contributor, giving her more than $27,000. Other major donations came from employees of the multi-national law firm Davis, Polk & Wardwell ($25,900); electric utility Southern Co. ($15,750), and paper products giant Weyerhaeuser Co. ($10,500).

Lobbyist groups advocating for Goldman Sachs, General Motors, the National Rifle Association, and the U.S. Chamber of Commerce were represented at a fundraiser for Sewell in late June last year, according to documents on Sunlight's  Political Party Time. The Alabama freshman is not alone in receiving a large portion of her campaign contributions from lawyers and lobbyists; lawyers and lobbyists were among top contributors to all nine Democratic freshmen.

A Tulane-educated lawyer and former state legislator, Richmond won his race without much trouble, despite a history of controversial dealings both politically and in his personal life.  In 2005, Richmond was ejected from the election for New Orleans City Council for falsifying his papers in order to run for a district in which he didn't live. During the 2011 primary, his political opponents also highlighted a misdemeanor charge he received following a 2007 bar fight. Richmond said he was defending himself. He has received more than $75,000 from lobbyists, making the lobbying industry his fourth-biggest contributing sector.

Cicilline became the fourth openly gay member of Congress when the former Providence mayor eked out a win in 2010 with 51 percent of the vote. He now faces another tight race against Republican Brendan P. Doherty. However, according to the latest numbers, Cicilline — with $1,565,236 — has out-raised his opponent by almost half and has spent more than twice as much as Doherty. Cicilline receives more money from lobbying groups than any other Democratic freshman, with $94,558 coming in over the course of his political career.  Political Party Time shows that representatives of companies and organizations including Facebook, Delta Airlines, General Electric, Human Rights Campaign, Goldman Sachs, and the U.S. Chamber of Commerce have attended Cicilline fundraisers.

Carney has received nearly $60,000 from lobbyists over the course of his career, and has been the beneficiary of fundraisers hosted by lobbyists representing Facebook, AT&T Walmart, Ford Motors, the U.S. Chamber of Commerce, and several pharmaceutical companies. However, it is the financial sector that is Carney's primary benefactor. In just the last year, Carney received more than $325,000 from finance, insurance, and real estate companies, with the majority of that money coming from PACs.

Rep. Frederica Wilson, D-Fla., received an endorsement from President Barack Obama himself, in the midst of a struggle to win a primary challenge against a Haitian-American Democratic opponent, Rudy Moise, who had the public backing of Haitian President Michel Martelly. Though Moise raised more than $300,000 for his challenge (compared to $441,000 for Wilson), the congresswoman won the primary by a nearly two-to-one margin.

Hanabusa faces a reelection battle against former Rep. Charles Djou, one of "the rising stars of the Hawaiian Republican Party," according to Honolulu newspaper the Civil Beat. This is the third time Hanabusa and Djou have battled for this congressional seat. Djou defeated Hanabusa in a May 2010 special election in which she and another Democrat split their party's vote. Djou then lost to Hanabusa seven months later in the November 2010 general election. The congresswoman is one of three Buddhists serving in the House, according to the Congressional Research Service.

In contrast with Hanabusa, Wilson, and Cicilline, Bass had no trouble winning her district in 2010  with 86% of the vote. The former community organizer cited her involvement in the Los Angeles community for her sweeping success. One of four African Americans in the Democratic freshmen class, she faces little threat to winning a second term.

Among the nine, Rep. William Keating, D-Mass., stands out as the most seasoned politician. His 35 years of experience in Massachusetts state House and Senate gave the Boston lawyer added seniority over other House first-termers. Because of his experience, Keating serves on three committees (most junior House members serve on one or two) and is the ranking member on the Oversight, Investigations, and Management Subcommittee in the Committee of Homeland Security.

One freshmen who has already dropped off the map is Rep. Hansen Clarke, D-Mich., who lost the Democratic primary to fellow Rep. Gary Peters, D-Mich. The two incumbents were pitted against each other following redistricting.