TAMPA — When Tampa Bay Online reported a few weeks back that a lobbyist rented out a sprawling, upscale restaurant for the whole week of the Republican National Convention, they provided a host of details about the restaurant, the big tabs that the GOP high rollers would run up there from early breakfasts to late hour sessions, even the fact that the lobbyist had run the same kind of insiders dining club at the last three Republican conventions. But they were unable to find out the lobbyist's name, or who he worked for.

That mystery has yet to be solved, but the lobbyist who rented out Jackson's Bistro, according to details of some events that have spilled out in Tampa, has connections with telecom giant AT&T.

AT&T is sponsoring several events at the posh eatery, located on Harbour Island and featuring a prime view of the Tampy Bay Times Forum, the site of the convention. The Michigan delegation threw its kickoff party there Saturday night, which featured top state lawmakers. Guests at the event went home with a stuffed animal elephant with an AT&T logo, the Detroit News reported. AT&T also appears to be sponsoring an Illinois delegation event there on Tuesday afternoon. The Chicago Sun-Times reported that the telecom giant is sponsoring the event, and events lists show that the Illinois delegates will be at Jackson’s that afternoon.

Companies are throwing down millions of dollars to help pay for the $55 million program being put on by the GOP host committee in Tampa this week, which can accept unlimited contributions–the list of donors do not have to be reported to the Federal Election Commission until Oct. 15. But companies and lobbyists are also putting on and sponsoring outside events where executives can rub shoulders with members of Congress. There are at least around 200 such events going on this week, and plenty of revelry can be expected next week at Charlotte 's Democratic convention as well. Party Time is tracking the events, and Sunlight is covering the convention on the ground and using Sunlight Live, covering the big convention speeches.

But a lot of the real political work at conventions happens away from the cameras and microphones and behind closed doors at private parties, where politicians rub elbows with the special interests that finance their campaigns.

Jackson's Bistro is booked for private events through Thursday, a restaurant employee confirmed when called Monday. When asked about specific events or to confirm AT&T’s role, she said “we can’t release that information.”

An AT&T spokesman has not returned an email asking if the company rented the space.

The Tampa Bay Times previously reported that AT&T had rented the space, but it was not clear that they had done so for the entire week. Then a Tampa Bay Online reporter detailed the efforts by a lobbyist to book the space. The lobbyist visted Jackson's a year and a half ago. Six months ago, the lobbyist scouted it as a potential location. The owner, Gregory Stinson, wouldn’t tell Tampa Bay Online who the lobbyist was but said his track record at past conventions persuaded him that closing his doors to all but the politically connected would be too lucrative an opportunity to pass up.

AT&T has reported more lobbying spending than any other telecom or tech company on lobbying this year, and the fifth most of any company or interest group–some $10.5 million, according to the Center for Responsive Politics. AT&T's lobbying budget even tops a surging Google, which has built a high tech space (see below) at Tampa's media center, where it plans to hold Google Hangouts on its social media platform, Google+. The company is the official livestream provider of the GOP convention, so it will be broadcasting speeches on YouTube. 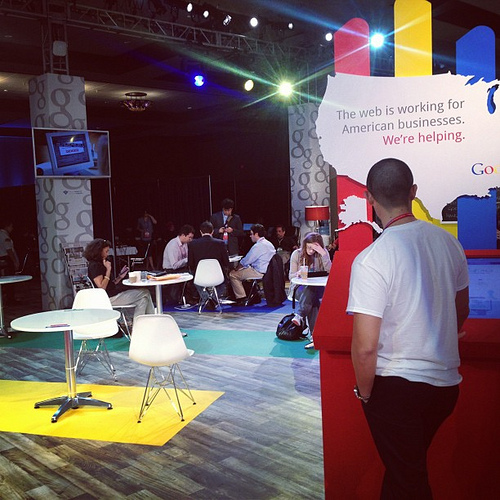 Google is not commenting on how much it is spending to provide livestream and build the media area, but a spokesperson said the company is building another "innovation center" in Charlotte. On Thursday Google is partnering with the Young Gun Network, an outside group affiliated with Majority Leader Eric Cantor, R-Va., for a private event.

AT&T has been tilting toward the GOP: The contributions from AT&T’s PAC, employees and their family members to federal candidates total about $3 million for the 2012 cycle, with about two-thirds of the money going to Republican federal officeholders and candidates, according to CRP.

Only one corporate PAC has contributed more to Republicans in the 2012 cycle than AT&T: Honeywell. AT&T's PAC is third overall this cycle; Eric Cantor’s Leadership PAC is the number one contributor.

Even though its lobbying effort to convince the Obama administration to approve a $39 merger with wireless operator T-Mobile approved failed late last year, its lobbying has shown no signs of abetting. Its influence budget this year topped last year's.

In addition to its in-house lobbyists, it has employed 23 other firms or individual lobbyists this year, according to CRP. That leaves a lot lobbyists who might have rented Jackson's Bistro on the telecom giant's behalf.