“What have I done to be kicked off the property?” retired teacher Karen Saal asked a security guard outside the Crowne Plaza Tampa Westshore Hotel. The guard's answer: the hotel manager specifically asked that she go. And she wasn't alone. Officials were also ushering peace activists off the hotel property after they interrupted a gathering of the Republican Jewish Coalition (RJC) honoring pro-Israel members of Congress during the Republican National Convention.

Saal, from Oregon, is against the "militarism" of Israel and the United States but said she was not protesting. She said she was just in the parking lot while protesters from a peace group chanted slogans against the U.S.’s financial support and Israel’s policies towards Iran and Palestine.

Saal is attending both the Republican and Democratic conventions in Charlotte, and doing so on her own dime. Why?

"I feel strongly about… foreign policy, the war on women, dollars in politics," she said. "This government's broken." 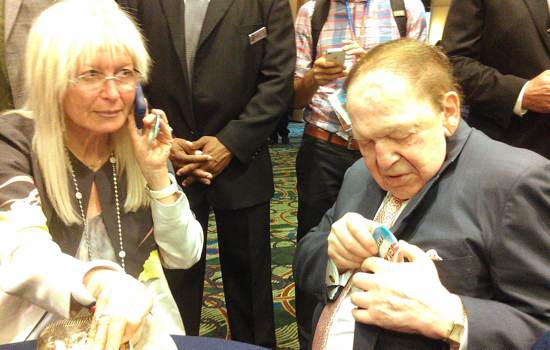 Sheldon Adelson with his wife, Miriam, at the Republican Jewish Coalition reception in Tampa. Photo courtesy of Avishay Artsy of KCRW radio.

The RJC is backed by billionaire casino mogul Sheldon Adelson, who made an appearance at the event, and plans to spend $6.5 million in an ad campaign to convince Jewish voters to vote for Romney. The group is holding another reception Thursday afternoon — this time to honor GOP governors.

This kind of event, along with others yesterday, represent the kind of social three-tiered pyramid that has developed here at the Tampa convention. Bottom tier, the largest and least-exclusive:  Happenings open or broadcast to the public.

Because the Jewish gathering was open to anyone who knew about it and RSVP'd one might say it was in that category. Even so, Saal and the protesters were kept far away from the event and attendees, not even allowed in the hotel parking lot.

A more middle-tier event Wednesday afternoon, was a private, invitation-only event held by YG Network, a political non-profit affiliated with House Majority Leader Eric Cantor, R-Va. But there were links to the RJC event: Cantor also spoke at the RJC event. And, the YG Network Woman Up! Pavilion, located near the convention site, is sponsored by Miriam Adelson, Sheldon Adelson’s wife. The couple have combined to give $10 million to a pro-Romney super PAC and have pledged to spend $100 million giving to outside groups to elect Republicans and defeat Obama this year.

To get into that event, where Florida Lt. Gov. Jennifer Carroll was being honored, requires either had to have an invitation — something an average delegate and Saal would not have — or $2,500 to become a “co-host.”

One honorary host was Susan Hirschmann, a D.C. lobbyist and former chief of staff to former Rep. Tom Delay, R-Texas. Hirschmann has contributed more than $40,000 to GOP candidates and political action committees this election cycle, including Cantor, according to Influence Explorer. Asked about whether and how she is spending her money to help Romney get elected, she demurred. “I have to walk over here now,”  she said, slipping into the pavilion, which was closed to the public.

Then there is the top tier of the pyramid: the most exclusive events. This level includes private briefings for donors to super PACs and secretive nonprofits (or boat cruises for Romney bundlers) that have not been disclosed to the public. Those meetups are orchestrated by the likes of Steven Law, a lawyer who heads Crossroads GPS, a secretive tax-exempt nonprofit founded by GOP operative Karl Rove that, along with its sister group, American Crossroads, is pledging to spend $300 million to elect Republicans this fall.

Law was at a hotel in downtown Tampa blocks from the convention siteon Wednesday afternoon. Asked if he was off to attend private events as he was leaving the lobby in the afternoon, he said: “If they were private, I couldn’t tell you about them.”  He denied coordinating any private briefings between wealthy donors and top GOP officials, but said other groups may be doing so.