CHARLOTTE, N.C. — It’s hard to get the nation's 20 Democratic governors in one place. But that didn't stop party organizers from trying with a swanky, '70s-themed event here Monday night, complete with women in go-go outfits dancing on tables and an ABBA cover band at a two-story downtown club.

One wide-eyed attendee, the president of a state teacher’s union attending his first Democratic National Convention, said he didn’t expect the party to be this good. 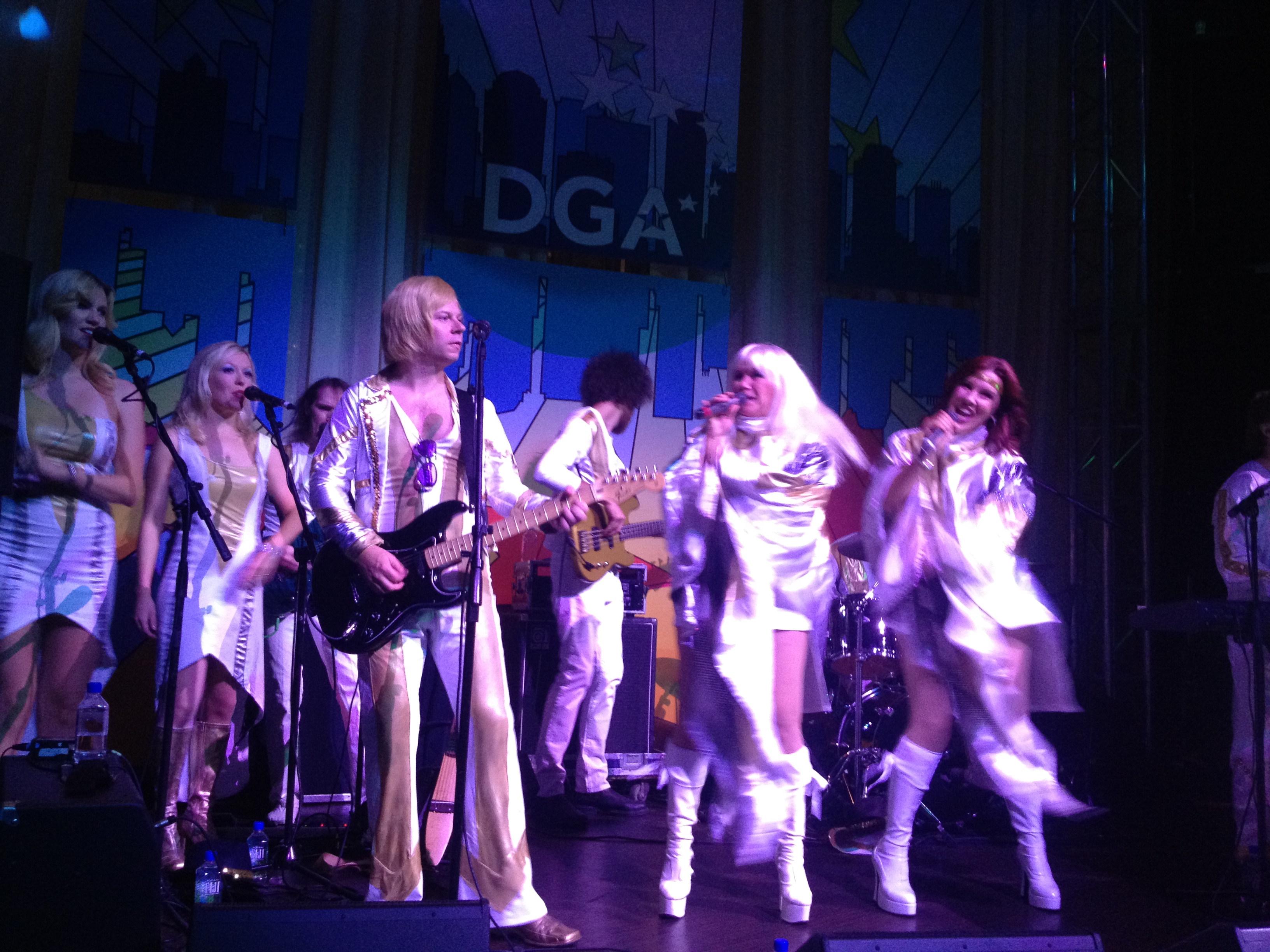 About seven of the nation’s governors showed, according an an employee of the Democratic Governors Association (DGA), which was hosting the event. Sunlight either spotted or confirmed sightings of five, including Maryland Gov. Martin O’Malley, a rising political star and the DGA's chair. When he walked in, he was soon surrounded by Democrats as he stood next to a larger-than-life portrait of himself. Down the way was an enormous portrait of North Carolina Gov. Bev Perdue, who attended earlier that night. Between those portraits: One of the actor Paul Newman.

The DGA, an organization that can accept unlimited funds—and has pulled in over $35 million so far this election–to help elect governors across the country, is holding shindigs morning, noon and night in Charlotte.

This swanky, open bar event was the opposite of the messaging coming from the national party apparatus, who have claimed to put on a different kind of a convention. Democrats have emphasized that the Democratic National Convention Commitee, unlike its Republican counterpart, would not accept corporate or lobbyist funds. But that ban doesn't affect the groups organizing fundraising around the convention, as was evident at Monday's party, where corporate logos–such as those of beverage giant Diageo–flashed on TV screens at the event's entrance. The other sponsors ranged from Citibank to Chevron to Aflac.

The DGA has about a dozen corporate-sponsored events scheduled in Charlotte this week—from a “Governor’s Cup Golf Tournament” to nightly open bar parties into the wee hours to an executive luncheon at the historic Duke Mansion a couple of miles from downtown. The sheer number of events stands out here in Charlotte, according to an event list obtained by the Sunlight Foundation, which gathers party invitations at Political Party Time.

So it seemed appropriate that, as a crowd of about 200 looked on, the band sang "Money Money Money," at Monday's event. Among others in attendance: Montana Gov. Brian Schweitzer, Massachusetts Gov. Deval Patrick and Minnesota Gov. Mark Dayton, along with the state teacher's union president who was impressed by the party. He said he has tickets to "everything" because the National Education Association union is one of the campaign's biggest contributors. 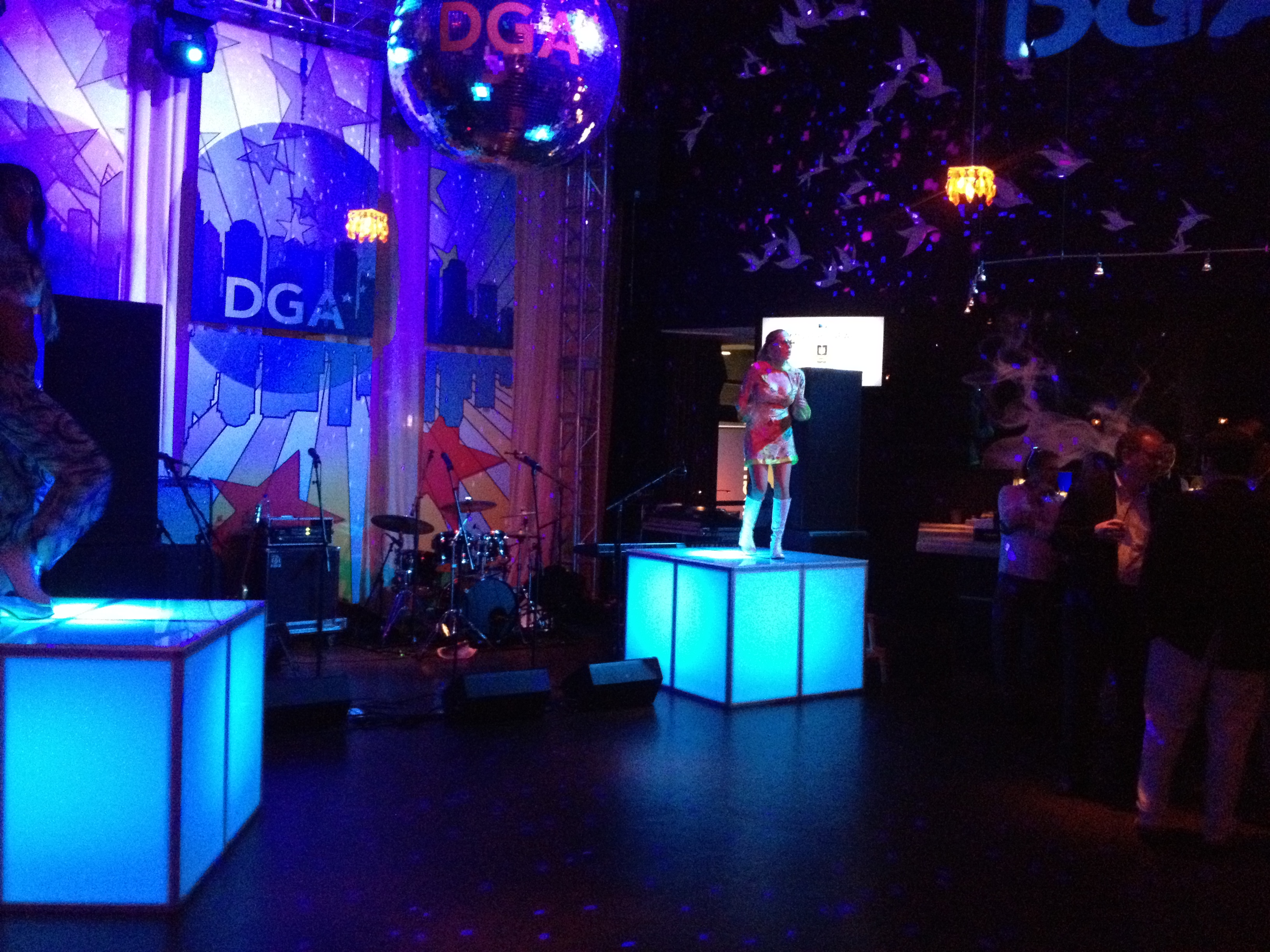 To put on the swanky event, a considerable amount of Washington came to Charlotte: The women in high boots were imported from D.C. The club, called the Mez, was outfitted with a 70s theme by Hargrove, a D.C. event design company. There was a disco ball sporting a DGA logo; the DJ sported an Afro, and everyone was handed sunglasses.

In this campaign cycle, the attention focused on relatively new-fangled super PACs and political nonprofit groups enabled and empowered by recent Supreme Court decisions, have drawn attention away from 527s, an older type of political committee represented by the DGA. But 527s can still be formidable fundraising machines.

The DGA's Republican counterpart has raised more than double the Democratic group's haul, according to the Center for Responsive Politics. The two committees amount to the two most well stocked 527s on state races.

The DGA has been dropping millions of dollars to help Democratic governors get elected in states like North Carolina, Missouri, Wisconsin and Washington this year. It has dropped $2 million to a labor-affiliated group called Our Washington to help elect Rep. Jay Inslee for governor. It has even given directly to candidates’ campaigns, financing Missouri Gov. Jay Nixon, to the tune of over $1 million this year. Missouri is one of the few states without campaign finance limits.

The expenditures are disclosed every quarter on form 8872 with the Internal Revenue Service.

The top corporate and union contributors to DGA have given more than $500,000 in the two-year 2012 election cycle—that includes AstraZeneca, Pfizer and AFSCME. Exelon, one of the nation’s largest utilities, has donated nearly as much.

One night prior to the 70's bash, the group’s convention kickoff party was a rooftop event with a young crowd volleyed beach balls up in the air to each other as they watched masked DJs and dancers and downed free drinks. Celebrity Jeff Bridges stopped by to talk to the crowd about child hunger, according to a tweet by political satirist Julianna Fortuno, who attended the event.

The event sponsors were listed on a sign, seen below, at the event’s entrance. They included some of DGA’s top donors: AstraZeneca pharmaceuticals, Blue Cross/Blue Shield, the American Federation of State, County and Municipal Employees. Other sponsors of DGA events this week include the American Petroleum Institute, Edison Electric Institute, American Gas Association, Nuclear Energy Institute and Premier, Inc., a Charlotte healthcare company. 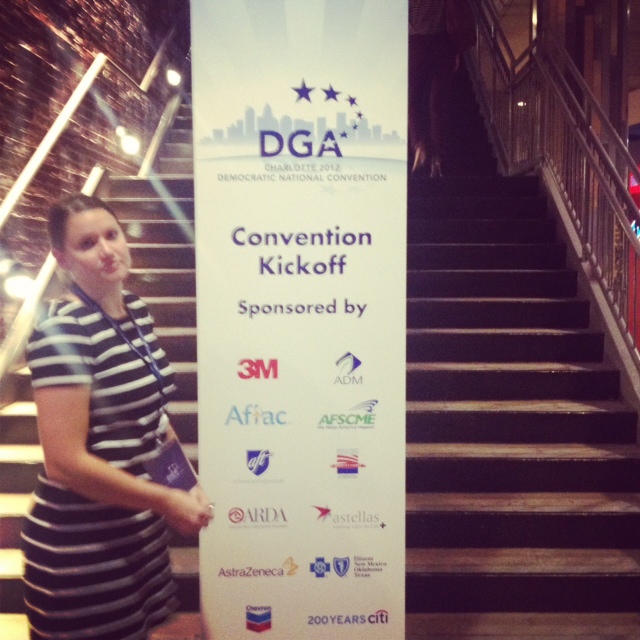