As Sunlight’s Video production Director it is my delight to be producing an ongoing video series called OpenGov Champions, featuring citizens who take action in their own ways to open up, or as in this case, contribute to, government data.

I was especially excited to go to Brooklyn, NY to film this episode in which we showcase Liz Barry from Public Laboratory for Open Technology and Science (PLOTS) and their grassroots mapping efforts. Theirs is a unique way to work with and contribute to open government data. I had watched Liz’s TED talk about the mapping they did in 2010 of the BP Deepwater Horizon oil spill in the Gulf Coast. Their maps were the only high resolution images available at the onset of the spill and spread all over the world media because access to airspace was restricted and planes could not capture aerial photos using traditional methods. It all had started with Jeffrey Warren in MIT and others who were experimenting with new ways to create high resolution maps using low cost, DIY technology like kites, balloons and cheap digital cameras. When the Deepwater Horizon drilling rig exploded, they saw the opportunity to help by mapping the scope of the disaster. That’s when Liz met them and jumped right in, helping with logistics and connecting people with boats and crews. In my mind there is a rock star quality to this kind of opengov data work. And they have indeed gotten a lot of fame for their work and were a Knight News Challenge winner in 2011 among other things.

Liz has been with Public Lab (as it’s often abbreviated) as Director of Urban Environments ever since. Her goal is to empower citizens to take on their own investigations using DIY scientific methods. Anyone can — and many people now have — use their open source methods to make maps of all kinds of environmental, social or cultural phenomena all around the world where governments have not gathered geospatial or other data in high enough resolutions, or in some cases, like in the Czech Republic, were actively trying to hide damage done to their national forests.

Liz has worked her whole life in widely varied projects that all share the goal to enable citizens to participate in and improve upon their urban environments.  Her past projects include starting an urban youth-led farm, encouraging neighbours to talk to each other by organizing events in a Bryant Park that thousands attended, to designing new cities for a company she worked for. More recently she has been combining technology and open data with a lot of hours spent outside on foot or on bicycle, whether slugging through rough terrain or on the streets of Brooklyn.

It was more than a 100 degrees with jungle humidity the day we met with Liz and some other activists who work on the Gowanus Canal project in Brooklyn. And yet these people were out there, flying up kites, documenting the watershed around the heavily polluted canal, as they do in all seasons: through mud and rain in fall, snow and slush in the winter, the sunshine and heat in spring and summer. They do all this mapping in order to get the full picture of the life of the canal throughout the year and to find out how the rehabilitation efforts, namely building a park around the edges is going, which plants are thriving and which are not, and to find and document sources of ongoing surface pollution like trucks doing illegal oil changes. Even though the Environmental Protection Agency has declared the canal a Superfund site and have already done a survey of the deeper contamination issues on the canal, as Eymund Diegel, one of the grassroots mappers, points out, unlike the concerned residents of the neighborhood like himself, they are not there every day, documenting the smaller scale, subtler issues that all contribute to the trash and chemicals creeping into the canal. Residents who go canoeing and spend time around the canal are invested in the improvement of the watershed in a totally different level. Eymund wants his kids to be able to come to the canal and learn about different kinds of fish, birds and plants instead of the trash currently floating around in the water. 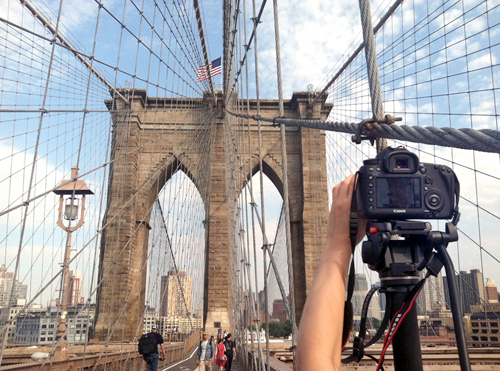 Liz has some of these maps created by Public Lab’s citizen scientists on the walls of her apartment in Williamsburg, Brooklyn. They are even more impressive online where you can zoom into the details: the ones from the Gulf Coast incident have 8000 pixels to cover the same area that would be captured in one single pixel in the daily MODIS satellite imagery provided by NASA. You can clearly see individual birds and plants and how the oil is making landfall, leaking through the barriers that were supposed to keep it out. In many areas these grassroots maps have actually been incorporated into Google Maps, giving them a real detail boost as they are a hundred times bigger in resolution.

The Gowanus Canal is just one of many examples of projects like this cropping up around the world. Public Lab conducts trainings and offers starter kits and free, open source software for people to use so that they can easily set up their own investigations and make maps in their own areas. (Our Associate Video Producer Solay Howell got to film one of those trainings in Brooklyn the day after our Gowanus adventure where they made solar balloons that require no helium.) Anyone can join, start conducting their own research, collaborate with others and add their findings to their Data Archive. Liz is particularly interested in increasing interchange between this data and open government data.

What a great example of OpenGov Championship: enabling citizens and governments to work together to gather data and put it to use to improve our own environments.

Our OpenGov Champions are remarkable ordinary people who have done extraordinary things to open up our government. Get inspired by their stories and nominate someone in your community to become an OpenGov Champion.