I spent August 24th and 25th in Mexico City for OpenDataMX – a conference, hackathon, and app contest organized by Fundar, a Mexican NGO founded in 1999 and focused on democracy and citizen participation. Developers were provided with 32 different datasets collected by various NGOs that they were encouraged to use, and they had 36 hours to turn something around before judging. 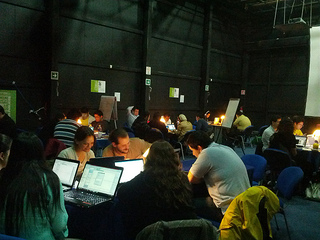 It turned out to be an excellent time, with a great turnout of very focused developers. I was fortunate enough to be a judge of the contest and see a lot of great work. Becalia took the first prize with a prototype of a Kickstarter-style platform where current and aspiring students can set up campaign profiles to seek scholarships from government, education NGOs, and their fellow citizens. Second prize went to “Más inversión para movernos mejor“, a site that takes in simple citizen input on public transit priorities, and shows you how well current government spending matches up with your choices. Finally, DiputadoMx took third prize with their microsite and public API for looking up citizens’ representation.

There were over 20 teams comprised of more than 60 people, and more solid ideas than we could give prizes to. Thanks to Fundar for hosting a great event, and catalyzing good work. Check out Fundar’s own writeup of the event for even more (Spanish) detail.