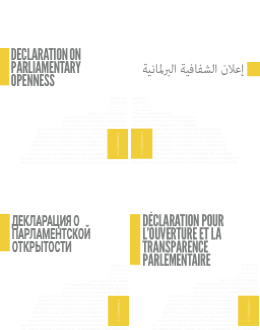 Tomorrow morning, I’ll be joining a number of other organizations in addressing a broad gathering of parliamentary officials at the World e-Parliament Conference. We’ll be formally announcing the Declaration on Parliamentary Openness, a joint document prepared and drafted by the growing movement of Parliamentary Monitoring Organizations, or PMOs, operating throughout the world.

This is the clearest, most broadly representative effort yet to represent global norms for legislative transparency. It’s intended to create common goals and expectations for a representative branch of government that is transparent and accountable, increasingly by using new technology to represent citizens better.

Sunlight is participating as both a PMO, since our advocacy, reporting, and technology are so often about political influence and substance in Congress, and also as a convener, joining with the National Democratic Institute and the Latin American Network for Legislative Transparency to connect PMOs from around the globe.  We created OpeningParliament.org to serve as a resource for the group and our activities, and since our kickoff meeting in May 2012 (adjacent to TransparencyCamp), the community has grown dramatically, and worked together to shape and sharpen the declaration.  Over 80 organizations have now endorsed the declaration, and we’re proud to be presenting it to officials from the world’s Congresses, Assemblies, and Parliaments tomorrow.

The Declaration is intended to be bold and clear (and, well, declarative), while also acknowledging the various national contexts in which parliaments function — cultural, historical, political, technological, and economic factors all help determine legislative institutions’ capacity. Democratic norms, however, can transcend those variables. NGOs too often operate in comparative isolation, addressing national governance issues through national advocacy.

The forces NGOs struggle against, however, are often not nation-specific. Some of the most powerful forces that affect national governance are inherently global: corruption, weak civic education, corporate or other illicit influence, and a variety of economic and social issues are relatively borderless. The NGOs pushing back against those forces should be operating at a global level as well, and we see legislatures, the most representative, broadly responsive government body, as primary and key to all governance reforms.

PMOs, as the civil society groups that focus on legislatures, aren’t just finding common cause in the global nature of their challenges. New technology has also become an organizing instrument, giving organizations who work with legislatures new ways to find common cause. While parliamentary monitoring isn’t new, the fundamental tools of online parliamentary monitoring are. Scraping bills, votes, and Member identities so they can be re-presented may be the most obvious connector among many of the world’s PMOs, but the connection runs deeper. New technology has created a public sphere that, at its best, knows no national borders (assuming existing infrastructure and a lack of government censorship) — a public sphere where self-expression, analysis, and reuse and repurposing are the fundamental units of sense-making. Information technology is causing the diffuse world of parliamentary monitoring groups to become more like a community.

This first time I experienced that feeling of the PMO world shrinking was at a Berlin conference organized by MySociety in 2008, where the wikipedia page on Parliamentary Informatics demonstrated that there were more groups making webpages about parliaments than any of us knew. Then again, in 2011, Andrew Mandelbaum of NDI wrote the seminal report that coined the term PMO, demonstrating in great detail the common approaches among groups from the US to Poland, Malaysia, Afghanistan and Argentina.

Tomorrow’s presentation is a culmination of sorts, where a declaration intended to broadly represent PMOs will be presented to the broadest representation of legislative officials. The declaration, at the moment, is a statement of expectations, drawing from the experience and vision of the world’s experts in monitoring parliaments, and enunciating the best practices of leading parliamentarians and officials. (Seriously, check out the notes behind the document, which can be viewed section by section here, and run over 50 pages.)

The declaration is also intended to be a starting point. It’s intended to help validate NGOs work, help them set priorities, and serve as a guidepost for future studies, comparisons, compliance monitoring, and a constructive relationship with legislatures. Parliaments should find it an invaluable source for strategic planning purposes, and it should also help validate internal actors who wish to raise the bar on their work. It may occasionally be politically relevant, since normative expectations can be used for both negative and positive pressure. But perhaps most importantly, we hope that the declaration can be used to cause specific, meaningful changes in how legislatures serve people’s needs, and to empower PMOs to be catalysts for those changes.