With Republican presidential candidate Mitt Romney campaign’s finances in some trouble, a fundraiser at an upscale Washington hotel Thursday featuring his runningmate, Rep. Paul Ryan, R-Wis., attracted about 200 donors, according to an estimate from one who paid $1,000 to attend.

That was the lowest price of admission for the event, at the stately Mayflower Renaissance. For $2,500, guests got a photo with Ryan and for $10,000, they participated in industry roundtable meetings. After the photo op, attendees swung over to another room where they could have a beer or a glass or wine. Ryan was also supposed to deliver a speech. The money goes to the Romney Victory Fund, a shared account between the campaign, the Republican National Committee, and four state GOP committees.

MORE: See a slideshow of the fundraiser below.

It’s unclear whether this event gave the campaign a sufficient boost. Another downtown hotel fundraiser that featured Romney himself in February attracted a much bigger crowd, and had as many as four times the number of sign-in tables; it was supposed to bring in $1 million. Thursday’s fundraiser featured a measly four tables of nametags, many of which still had not been picked up by the time of the 7 p.m. general reception. The event started at 5 p.m. with the roundtable meetings. 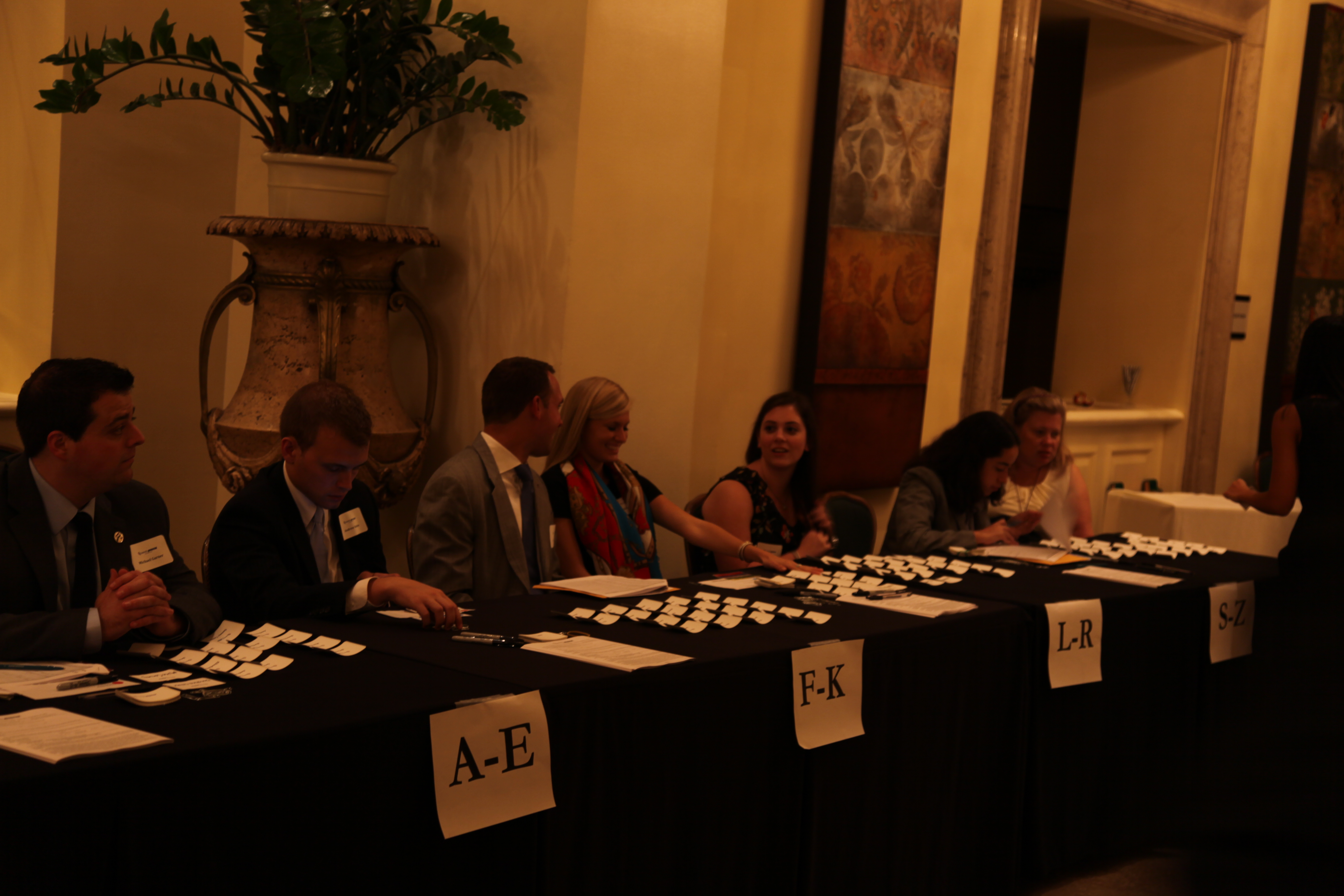 The fundraiser took place in two rooms; the entrance to them was cordoned off by dark curtains and a metal detector. Across from the Romney campaign sign-in tables was another table run by a separate group, whose event could have easily been mistaken for Ryan's, especially since the charity's name — Rebuilding Together—could easily be either presidential campaign's slogan. In fact, the group, which does home repairs for people who can't afford them, initially reserved the rooms used for the Ryan event but got bumped elsewhere to accommodate the campaign.

It was an altogether different constituency behind the dark curtains, according to one attendee, a lawyer at a big downtown law and lobbying firm, who managed to penetrate the inner sanctum where reporters weren't allowed to tread.

“I walk in the lobby and I take a whiff and it’s expensive perfume and I quietly said to myself: This is a Republican affair,” he said.

Our source did not want to be named because “I’m very new at my law firm and don’t know what the rules and regulations are” even though he was donating his personal money and was not there in connection with his firm's political action committee.

Behind the curtain, he said, there were 200 people lined up to take a photo with Ryan before they headed over to the other room, which featured the beer and wine and “probably” hors d’oeuvres. He said the atmosphere was like a gathering of old friends.

This reporter did not get behind the curtain. After snapping photos of name tags and some donors, a campaign staffer told me I had to leave because he did not want photos taken of the attendees. Soon, the Philadelphia Airport Marriott hotel employee approached me and said that I had to go because I was not allowed take photos inside the hotel without permission.

The donor interviewed has not given the maximum $5,000 personal contribution to the Romney campaign yet but plans to do so. He donated for this event because a friend, who is a Romney bundler, asked him to. “That’s how this town works,” he said. He’s been a Washingtonian for over 40 years.

He is not worried about Romney losing the battle of the airwaves though the campaign has reserved far fewer television commercials than the Obama camp in key states of late. He believes that there is money sitting on the sidelines that is ready to support Romney. “The campaign has a significant reserve of money that will appear at the appropriate time,” he said.