Buzzfeed offers five surprising charts about political money in the 2012 election cycle, feeding off of this recent release from the Federal Election Commission tallying up contributions and spending through June 2012. What they show–by omission–is how much Citizens United and subsequent court decisions and FEC rulings have changed the way campaigns raise and spend money. A few examples: 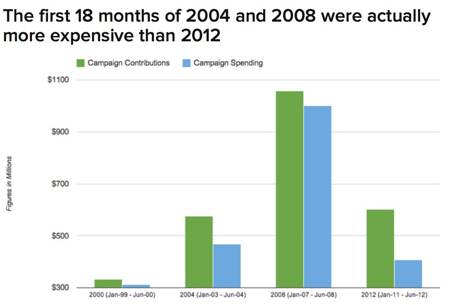 The first chart shows fundraising by presidential candidates in the first 18 months of each election cycle going back to 2000. Buzzfeed notes, "…presidential candidates spent more money through the second quarter in 2008 and 2004 — also an election with a sitting president — than they did in 2012." The 2008 election cycle is not comparable to either 2004 or 2012–there was no incumbent in either party. More candidates mean more money raised. Add to that the drawn out battle waged by rivals Barack Obama and Hillary Clinton, and the numbers really add up. So let's stick to comparisons between 2004 and 2012 for now.

Outside groups–mostly groups known as 527s, after the section of the Internal Revenue Code they were organized under–spent about $15 million on electioneering communications on all races in the first 18 months of the 2004 election cycle. That includes their spending on congressional races as well as presidential. By contrast, Winning Our Future, the super PAC that supported former House Speaker Newt Gingrich's unsuccessful quest for the 2012 Repubican nomination, spent more than $17 million all by itself. And unlike the old 527s, Winning Our Future was closely allied to Gingrich, just as Restore Our Future was closely allied to Romney. Romney even referred to Restore Our Future as "my super PAC" during a Republican debate in January 2012.

Overall, super PACs and nonprofit groups spent $116 million in independent expenditures supporting or opposing presidential candidates, of which $100 million came from the "official" candidate super PACs–Restore Our Future (Mitt Romney; $54.1 million), Winning Our Future (Gingrich, $17 million), Priorities USA Action Fund (Obama, $13.5 million), the Red White and Blue Fund (Rick Santorum, $7.5 million), Make Us Great Again (Rick Perry, $3.9 million), Endorse Liberty (Ron Paul, $3.4 million) and the 9-9-9 Fund (Herman Cain; $411,000)–if one includes the spending by super PACs closely allied to candidates with what the candidates spent themselves, presidential spending in 2012 is about $508 million–or $40 million more than the $468 million spent through the first 18 months of the 2004 cycle.

And back to those 2008 totals. That year, Republican nominee John McCain accepted money from the Presidential Campaign Fund, which meant that his campaign stopped raising money after he accepted the Republican nomination. In 2012, GOP nominee Mitt Romney is following Obama, who rejected public money in favor of raising oodles of campaign cash for the general election in 2008 and again in 2012. The numbers Buzzfeed shows, in other words, capture the full extent of the crazy rush for money that fueled the Obama-Clinton primary race in 2008, but don't include the ongoing mad dash for general election money that Romney and Obama are engaged in now. When all the dollars in 2012 are counted, we expect that having two presidential candidates raising money right up to election day for the first time ever, plus the surging contributions to super PACs (which have already surpassed 2010's total) plus increased congressional fundraising will make 2012 the most expensive campaign ever.

Buzzfeed's second and third charts show that Democratic party committees have spent more and raised more money than their Republican counterparts. But American Crossroads, which just poured $6 million into Senate races, is acting as a shadow Republican party committee–over the first 18 months of the current cycle, it raised nearly $52 million. That's $31 million more than two Democratic groups, the House Majority PAC and the Majority PAC, raised in the same period to support Democratic candidates. While American Crossroads is also spending money in the presidential contest, during the period in question, it was negligible–just $128,000 or so. Add its totals to Republican party committees, and add the Democratic congressional super PACs to the Democratic party committees, and the GOP is ahead in fundraising by about $11 million.

None of which is to say that Buzzfeed's charts, derived from this FEC press release, aren't worth a look, but bear in mind that ever since McCain-Feingold eliminated big soft money contributions to the political parties in the 2004 election cycle, outside groups have become ever more important conduits for putting big money contributions to work influencing elections.