Nevada is used to high rollers, but the state has special reason to be blase about this set. 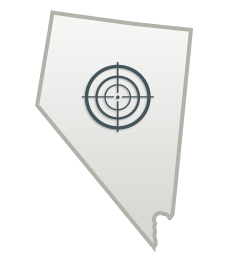 President Obama is in the state, prepping for his Wednesday debate with his Republican rival, Mitt Romney, after headlining a Sunday night rally in Las Vegas. Romney's wife Ann arrives in Las Vegas Monday for a rally in nearby Henderson and then an evening fundraiser at the home of Republican mega-donor Sheldon Adelson and his wife, Miriam, no slouch herself in the political underwriting department. And first lady Michelle Obama arrives Wednesday for a campaign stop in Reno.

Residents of the battle-weary state might be forgiven if they wished their guests would all go away. According to several of Sunlight's trackers, the Silver State has been enduring one of the most intense blitzes of political money and activity in the nation.

Though it ranks 35th in terms of population, Nevada is No. 7 on Sunlight's list of states that have drawn the most outside political money as of this writing. Another measure of the frenetic level of political activity: Nevada has seen the seventh-most political ad filings with the Federal Communications Commission, according to our Political Ad Sleuth tracker, which we're testing in-house and will make publicly available soon. The same tracker shows that the Las Vegas TV market ranks No. 3 in the nation for political ad buying activity. Only Orlando, Fla., and Norfolk, Va. have seen more.

All three cities are in states that are presidential battlegrounds and the sites of closely-fought contests that could determine control of the Senate.

In the Nevada Senate race, the incumbent — but just barely — is Republican Dean Heller, elevated from a House seat last year when Sen. John Ensign, R-Nev., resigned over a sex and lobbying scandal. He's being challenged by former House colleague Shelley Berkley, a Democrat strongly backed by her party despite an ongoing investigation by the House Ethics Committee over allegations that she used her official position to benefit her husband's medical practice. Berkley has denied wrong-doing.

Republicans continue to take Berkley seriously: Crossroads GPS, the political non-profit established by veteran GOP strategists Karl Rove and Ed Gillespie, has pumped more than $2.7 million into the race to oppose Heller. Patriot Majority USA, a Democratic non-profit with ties to organized labor, has answered back with nearly $2 million in independent expenditures to oppose Heller. They are the leaders of a pack of outside spenders in the race that include, on Berkley's side:  the Democratic Senatorial Campaign Committee; the American Federation of State, County and Municipal Employees; the Service Employees International Union and the Sierra Club. Among those in Heller's corner: the U.S. Chamber of Commerce, Americans for Tax Reform,  Freedomworks, the Safari Club and the National Rifle Association.

Of those groups, the following will not have to disclose donors because fo their tax status as nonprofits:

Nevada is also home to several competitive House races which are also attracting outside spending. In the 3rd Congressional District, outside spenders have pumped $1.6 million into the race between freshman Republican Rep. Joe Heck, a physician, and firefighter-turned- state Assembly Speaker Joe Oceguera.

The big spenders in this race are the Republican and Democratic congressional campaign committees, with the advantage going to Heck. But interestingly, House Majority PAC, a super PAC formed by former House Democratic staffers, has jumped in to more than level hte playing field in Oceguera's favor.

Another $1.5 million in outside money has been dumped so far into the pitched race for Nevada's newly created 4th Congressional District, where Democrat Stephen Horsford, the CEO of the Las Vegas Culinary Academy, is battling Republican Danny Tarkanian, whose father Jerry was the legendary University of Nevada at Las Vegas basketball coach and whose wife, Amy, is a former chair of the Nevada Republican Party.

Although the SEIU has invested more than $275,000 to help Horsford, most of the outside money is going against him. One intriguing entrant is the Center for Individual Freedom, a non-profit (which therefore doesn't disclose donors) that seems to be jumping into a number of close house races.

Harder to ascertain at this point is exactly how much money the presidential candidates and their outside backers are putting into the super-hot race to win Nevada's six electoral votes. The state is one of eight rated as toss-up presidential battlegrounds by non-partisan political pundit Charlie Cook.

Because groups playing in the presidential race are not required to break down their spending by state, the best barometer is the political ad files, which the FCC required stations affiliated with the four major networks — ABC, CBS, Fox and NBC — in the top 50 markets to begin putting online as of Aug. 2.

A look through recent filings show that the Romney campaign dropped $99,000 for a 115-spot ad buy at station KLAS that ends tomorrow. Obama, meanwhile just plunked down $114,000 for 234 spots on station KVVU through Election Day. The ad buy records show both candidates aiming at a mix of demographics, buying time on daytime TV shows (Young and Restless, Price is Right, Ellen) as well as prime-time news and sportscasts.

While the number of filings in a market is not the equivalent to the number of ads viewers will see — because many reflect revisions to existing purchases — they do provide a gauge to the level and nature of the political activity in a state. Our tracker shows no presidential ad filings, for instance, in New York and California, two of the nation's most populous and electoral vote-rich states, but two in which the outcome is viewed as a foregone conclusion.

In Nevada, of the 912 filings with the FCC so far, more than half — 448 — are by outside groups; 186 are for the presidential race and 109 are for the Senate contest. Among the outside groups filing ad buys: Crossroads GPS and Patriot Majority. The records on file with the TV stations,  do not indicate whether the ads are aimed at the presidential, the Senate or a House race.