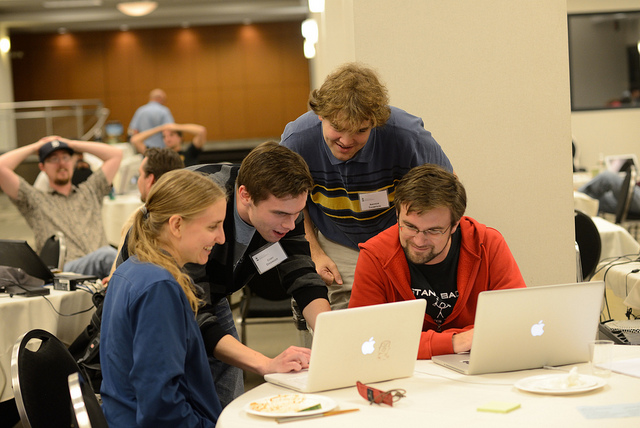 A bunch of us from the labs spent the weekend a few blocks away from Sunlight HQ, hacking away with nearly a hundred other devs competing in the Election Hackathon that we cosponsored with the Washington Post and NPR. We have a few thousand bucks in prizes, a nice catering spread, and some pretty cool  (and very judicious-looking) judges.

But by far the most important ingredient was the enthusiasm and hard work of the participants. And they delivered. A bunch of cool projects emerged, including a analytic poll exploration tool, a slick Windows 8 voter guide, a clever board-game visualization of candidates’ speech, a “how should I vote?” quiz, a Klout-clone oriented toward Capitol Hill, an identify-the-quote game, a nice candidate-based campaign finance and news viz, an ambitious battleground state game, a cool campaign finance/candidate speech charting tool, a lovely Processing app mashing up Capitol Words and WaPo fact-check data, some exploratory campaign finance work, and a fun congressional comparison app. (Apologies for any broken links; such is the way of all hackathon entries.)

It’s also worth noting a couple of entries that, though they didn’t specifically fit inside the guidelines for prize eligibility, nevertheless deserve to be celebrated for their ambition and importance. TurboVote’s Paul Schreiber worked with Sunlight’s own Kathy Kiely to look at how Nevada early voting locations relate to ethnic demographics collected by the Census. And another team worked on creating an API for NYC Stop and Frisk data (apologies for not catching the names of all of that team’s members, but I know it included Margie Roswell and Chris from Development Seed).

All of this was really tremendous to see. It’s especially inspiring to watch people take the datasets that we build and maintain at Sunlight and use them to create interesting and informative applications. This is the kind of stuff that makes it a pleasure to go to work.

For my part, I hooked up some GE Color Effects Lights I’d hacked together for New Year’s to color-code incoming tweets by whether they contain “Romney” or “Obama” (or the hashtag for the event). Pretty silly, but pretty fun.

Paul S. has a bunch of photos from the event here, if you’d like to see more of the event. PBS has a nice writeup here, and Michael Schonfeld reflected on the event (and the larger D.C. tech scene) in this blog entry.

A huge thank you to the Washington Post, NPR, our judges, and everyone who spent their weekend with us.