Tonight, Vice President Joe Biden and the Republican who wants to replace him, Rep. Paul Ryan, meet in Danville, Ky., for their lone debate of the 2012 campaign and Sunlight is offering you a chance to participate. The event comes a week after their running mates squared off and, thanks to a strong performance by Mitt Romney and a weak one by President Barack Obama, upended the polls. 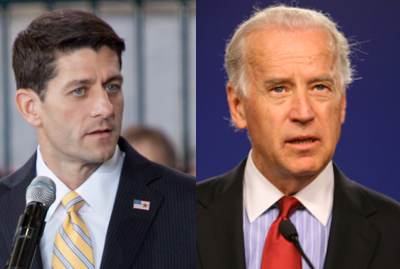 Tonight’s challenger,  a Wisconsin Republican who chairs the House Budget Committee, won national prominence for the so-called “Ryan Budget,” which he prefers to style the “Roadmap for America’s Future.” The roadmap, with its proposed changes in Medicare — including the federally-run health insurance program for seniors with a vouchers —  is sure to be a topic in tonight’s debate. Another likely flashpoint: Social Security. Ryan was also behind the 2005 effort to partially privatize the retirement program.

As we’ll point out during tonight’s debate, donors attracted to these ideas have provided financial support for Ryan. For example, two of the top industries that have backed Ryan over the years include the insurance industry (with $827,478 in donations) and the securities and investment industry ($810,349). But hose two industries actually rank second and third in terms of the sectors that have given the most to Ryan: Leading the list, with more than $1 million in donations, are retirees, the group that Democrats say the congressman’s budget plans will threaten most. We should point out, however, that it’s not unusual for retirees as a group to be the leading “industry” backing a politician. Indeed they top both Barack Obama and Mitt Romney’s lists in 2012 with $23 million and $20 million respectively.

Joe Biden, on the other hand, owes his political financing to lawyers. Over the course of Biden’s 40-year political career (at least, since 1989, which is the earliest we have campaign finance data), lawyers and those working at law firms have donated more than $6 million to Biden’s campaigns. That’s more than four times that of his next biggest donor class, the real estate industry, which has ponied up $1.3 million over the years.

The response to last week’s debate will surely draw more attention to tonight’s. According to Nate Silver’s Five Thirty Eight blog, which looks at election forecasting, Romney has made significant progress in his push for the presidency. Nevertheless, Silver’s calculations still favor Obama, whom Silver gives a 68 percent chance of winning to Romney’s 32 percent chance. That’s up from a low of 14 percent before the debate.

Analysts — and Ryan himself — expect Biden to come out swinging tonight. Whether he does or not, you can expect Sunlight Live to give you the inside insights on who stands behind both men’s stances.

In addition to our Sunlight reporting group staff, including Bill Allison and Kathy Kiely, we’ll be joined by the Center for Responsive Politics’ Russ Choma.

Tonight’s debate will be moderated by Martha Raddatz, senior foreign affairs correspondent for ABC News. Although the presidential debates are “themed” — that is, the first debate focused on domestic issues and the final debate will concentrate on foreign affairs — tonight’s VP face-off will cover it all. And we’ll cover it all, too, starting at 9 p.m. ET. We’ll look forward to seeing you then at sunlightlive.com.

(Photo of Paul Ryan, above left, by Starley Shelton; Photo of Joe Biden by Center for American Progress.)