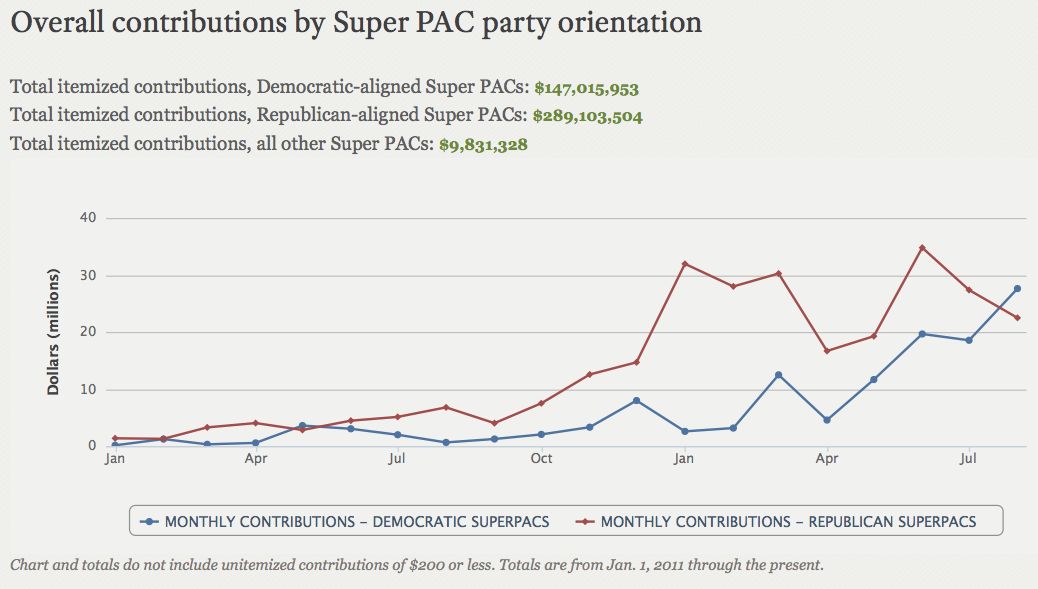 Democratic super PACs, which earlier this year lagged far behind their Republican counterparts, passed a milestone in August: they took more in contributions into their coffers than GOP super PACs: $28 million versus $22 million. Filings covering September are due this Saturday.

It may be more of a photo-finish than it first appears: a portion of the Democratic groups' take involve PAC-to-PAC transfers, which are difficult to extricate from the totals due to way reports are filed with the Federal Election Commission. But quarterly filings that landed Monday leave little doubt that the Democratic super PACs, including Priorities USA and a number linked to labor unions, picked up steam and are becoming competitive with the GOP super PACs such as American Crossroads, Restore our Future, and others.

Those totals don't include unitemized donations of less than $200. As we reported previously, the Services Employees International Union just reported collecting more than $7 million over a three month period in unitemized contributions. Nor does it include the United Auto Workers Education Fund's haul of more than $5 million, all of which was reported in September.

Meanwhile, Republican super PACs did not show as much movement. For example, American Crossroads reported $9.4 million in August compared to $8.6 million in July. Restore Our Future, the Super PAC that advocates for Mitt Romney, was down slightly, to just over $7 million from $8.1 million in July.

The uptick in contributions to super PACs on the left doesn't mean Democrats are drawing even with Republicans in spending. Left-leaning groups haven't been able to match the spending from non-profit political groups that don't have to disclose their donors, like Crossroads GPS, Americans For Prosperity, and the US Chamber of Commerce. Together these three groups have disclosed spending over $88 million this year–which could be a fraction of their total. In general, the Federal Election Commission doesn't require these groups to say how much they've spent on political ads that air more than two months before the election.