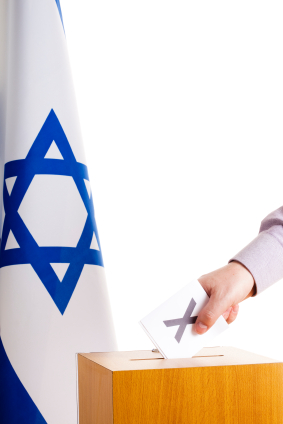 An assertive bipartisan get-out-the-vote effort known as “IVoteIsrael” and aimed at Americans living in that country appears to have ties to conservative billionaire Ronald S. Lauder, a supporter of Republican causes and of the hawkish Israeli Prime Minister Benjamin Netanyahu.

A project of Americans for Jerusalem, a charity registered under 501(c)4 of the U.S. tax code, IVoteIsrael is not required to release information about its donors. However, corporate filings in Delaware show that the group lists the same Manhattan address as that used by the Ronald S. Lauder Foundation. Other intriguing connections:

Americans for Jerusualem appears to be connected as well to another nonprofit organization, Secure America Now, which on Monday launched an ad in the swing state of Ohio charging that the Obama administration supports the Muslim Brotherhood, stating it has "expanded its issues-advocacy campaign by committing substantial funding for advertising in Ohio." In September it had announced an ad buy in the Florida on issue advertising featuring Netanyahu "discussing the looming threat of Iran’s pursuit of nuclear weapons." Details on some of the airtime purchases can be seen here on Political Ad Sleuth. In its 2010 tax reports, One Jerusalem reported receiving a small amount of assets from SecureAmericaNow.org.

IVoteIsrael has been reaching out to an estimated 160,000 American voters living in Israel through get-out-the-vote events, Facebook ads, and other activities. The "about us" section of the web site pointedly reminds Americans how crucial absentee ballots were in the 2000 elections, noting that only 64 of the absentee ballots that were counted in Florida came from Floridians living in Israel.

In June, the Times of Israel ran a report questioning the bipartisanship of the group, pointing out that key staffers had strong ties to the GOP and right-leaning Israeli groups. However, it did not report on any connection to Lauder. The group's strategist, Aron Shaviv, wrote a response stating that "IVoteIsrael is more than just a Get Out the Vote effort–we do have an agenda, and we are proud of it. Our legal status does not allow us to endorse a specific candidate…but it does allow us to endorse an issue: Israel."

Roth did not return a request for an interview as of this posting, and IVoteIsrael's spokesperson in Israel, Elie Pieprz, did not reply to an email.

Heir to the Estee Lauder cosmetics fortune,  Lauder served as ambassador to Austria under President Ronald Reagan. He's the current president of the World Jewish Congress, and, Sunlight's Influence Explorer shows, is a reliable donor to Republican candidates and parties and conservative causes in the U.S. Through his charity, the Ronald S. Lauder Foundation, he's donated many millions of dollars to Jewish universities and schools in Israel and central and eastern Europe. He provided the initial funding in the  mid-1990s for the Shalem Center, a think tank associated with right-leaning and necon viewpoints in Israel. He owns a large chunk of Israel's Channel 10 News, and has plans to launch an English language Israeli news site.

Lauder has long been a supporter of Netanyahu, and according to the Israeli paper HaAretz, is one of his leading donors, although the two men  had a cooling off and then rekindling of their relationship recently.

Last year Lauder was the focus of a New York Times report on how billionaires are able to use tax shelters to avoid taxes–a point of heated contention in the upcoming presidential election.

Official tax filings from 2010 show that One Jerusalem claimed $3,542 in assets from SecureAmericaNow.org. One Jerusalem officially changed its name to Americans for Jerusalem in November 2011, according to the Delaware Secretary of State's office, although the group still maintains a website presence under the old name.

That same year One Jerusalem also gave grants to several conservative organizations, including $125,000 to Citizens United, $94,500 to Independent Women's Voice, and $55,000 to the Jewish Center for Public Affairs. It also gave $40,000 to the the group's 501(c)3 arm, the One Jerusalem Charitable & Educational Fund.

Both the educational fund and the c(4) organization for One Jerusalem share a common address: 727 Fifth Avenue. The Ronald S. Lauder Foundation lists the same address and the suite number, 4200, as does New Yorkers for Term Limits. A call to the phone number listed for One Jerusalem on its tax filings was answered as "the office of Allen Roth." Several other nonprofit organizations that appear to have ties to the Lauder family are also listed at the same address, according to tax filings. The corporate offices for Estee Lauder are listed as 727 Fifth Avenue.

Calls to the Estee Lauder corporate offices and Secure America Now were also not returned before this posting.