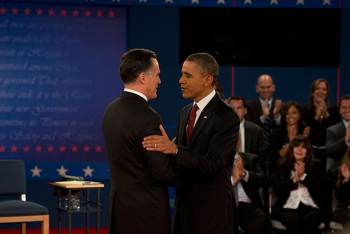 President Barack Obama and former Massachusetts Gov. Mitt Romney will meet on stage tonight for their third and final debate — this time on foreign policy. And we’ll be there to provide real-time analysis, context and conversation on our award-winning platform, Sunlight Live.

The debate comes just days after the candidates’ super PACs reported their latest financial disclosures. As we reported over the weekend, the pro-Romney super PAC, Restore Our Future, passed the $100 million fundraising mark. Restore Our Future was actually out-raised in September by the pro-Obama super PAC, Priorities USA Action, but because Restore Our Future raised more in previous months, it retains a $9 million cash-on-hand advantage.Where are these groups getting their money? Turns out more than two dozen people wrote million-dollar checks to these and other super PACs in September. No doubt they’ll be closely watching the final meetup between Romney and Obama to see if their investments will pay off.

So why should you be watching with Sunlight Live? In the first debate, when the candidates started talking education, Russ Choma of the Center for Responsive Politics pointed out that “Obama’s top source of funds are faculty and staff in the University of California system.”

During the vice presidential debate, when the conversation turned to supporting veterans of the wars in Iraq and Afghanistan, Sunlight reporter Anu Narayanswamy added that the department of Veterans Affairs has asked for a $140 billion over the next five years.

And last week, during the second Romney-Obama matchup, Sunlight’s editorial director, Bill Allison, provided a graphic to show the increasing trade deficit between the U.S. and China.

So now you know why you should be watching, too. The debate begins tonight at 9 p.m. ET, but we’ll get things started during the 8 o’clock hour, so join us at Sunlight Live.