DENVER — When GOP nominee Mitt Romney and President Barack Obama arrive in this battleground state for campaign rallies over the next 24 hours, they'll be accompanied by a barrage of television ads on programs ranging from news broadcasts to The View to Jimmy Kimmel to General Hospital.

Colorado's nine electoral votes are coveted by both campaigns and both are making personal appeals. Romney and his vice presidential running mate, Paul Ryan, will appear Tuesday evening to greet crowds at Red Rocks, a local outdoor ampitheatre that's usually the site of musical acts like Neil Young and Counting Crows. Obama will be appearing for a noon rally Wednesday at Denver's City Park, not far from downtown. 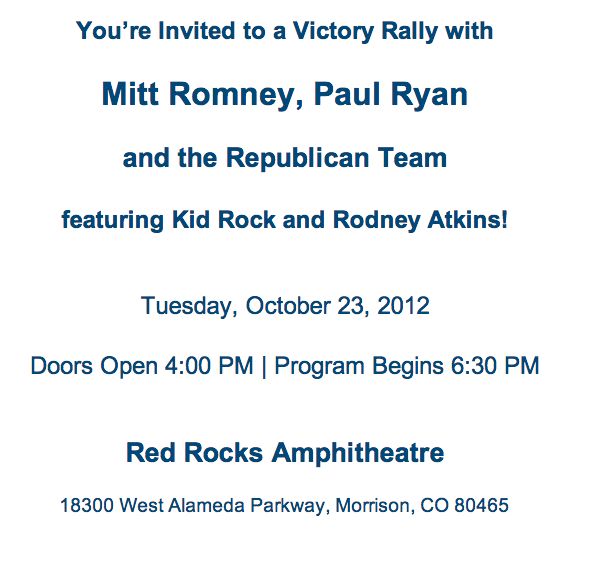 The warm up act has been relentless: American Crossroads, a super PAC that backs Republican candidates, has made a new purchase  of $167,675 for 102 spots to starting that morning and running through the week of the election, according to Sunlight's Political Ad Sleuth, which captures advertisements from major broadasters reported to the Federal Communications Commission (FCC). The same day, October 19, Restore Our Future, the super PAC supporting Romney, put in an order for $166,500 worth of ads–not clear how many– to run throughout the month of October.

Meanwhile, also on October 19, and then on October 22, Priorities USA and the Obama campaign recorded $171,515 for 106 ad spots, all to run during local news broadcasts this week.

In the two weeks leading up to October 18, the Romney campaign and super PACs that back him had been increasing buys in Colorado, where Obama and groups that support him had been doing the lion's share of advertising and still enjoy an advantage. According to analysis by the CU News Corp, a class of journalism students at University of Colorado contributing to Political Ad Sleuth and local I-News Network, the Romney campaign spent $1.8 million and American Crossroads $1.5 million over the two weeks leading to October 18. The Obama campaign, meanwhile, spent $1.2 million over the same time period, which overall saw $7.7 million in new ad spending, bringing the total to $32.3 million on 30,000 spots.

Last month the students had reported that disclosed political advertising had reached almost $20 million, with the Obama campaign leading the pack. Despite the recent spending surge by Romney and supportive groups, the Obama campaign still appears on top, with $8.55 million spent on 9,652 spots; the total rises to $10.5 million on 11,445 spots when advertising by Priorities USA is included. In contrast, the Romney campaign, American Crossroads, and Restore our Future combined have spent $7.8 million on 6,044 spots.

Of course these data have limitations. The FCC data do not include ad buys in certain other parts of Colorado, including Colorado Springs Pueblo to the south and Grand Junction-Montrose in the western part of the state. (Sunlight is looking for volunteers to help us expand our Political Ad Sleuth database and we're holding a hands-on session online Thursday.) And not all spending is on broadcast ads. For example, the nonprofit group Compass Colorado, a 501(c)4, has posted billboards critical of Obama, which are not required to be reported. Presently the group is linking Obama to Democrat Rep. Ed Perlmutter, who is facing a challenge by conservative Ed Coors of the brewing family. That race has attracted $1.4 million in reported outside spending, according to Sunlight's Follow the Unlimited Money tracker.