A recent New York Times Magazine article by Michael Pollan highlights the potential momentum for a new “food movement” in America if California voters decide to enforce the labeling of genetically modified organisms (GMO) foods by passing Proposition 37, the Genetically Engineered Foods Right to Know Act next month. Proposition 37 proposes to label all GMO foods, including processed foods that contain GMO ingredients, and to prevent GMO foods from being labeled or advertised as “natural.”

Agriculture industry giants opposed to Prop 37 are pouring money into California to defeat the ballot measure. According to the California watchdog group, Maplight, agribusiness giants have already sunk $35.6 million into defeating the prop with agrochemical titans Monsanto and DuPont emerging as the top two proponents with contributions totalling $7.1 million and $4.9 million, respectively. The bulk of that money has gone to the committee, No on 37: Coalition Against the Deceptive Food Labeling Scheme, Sponsored by Farmers and Food Producers. Other agrochemical and agroscience institutions like BASF Plant Science, Syngenta Co., Bayer Cropscience and Dow Agrosciences LLC have each contributed $2 million to the cause. Meanwhile, advocacy and industry groups in support of Prop 37 have only managed to raise $7.7 million in support. 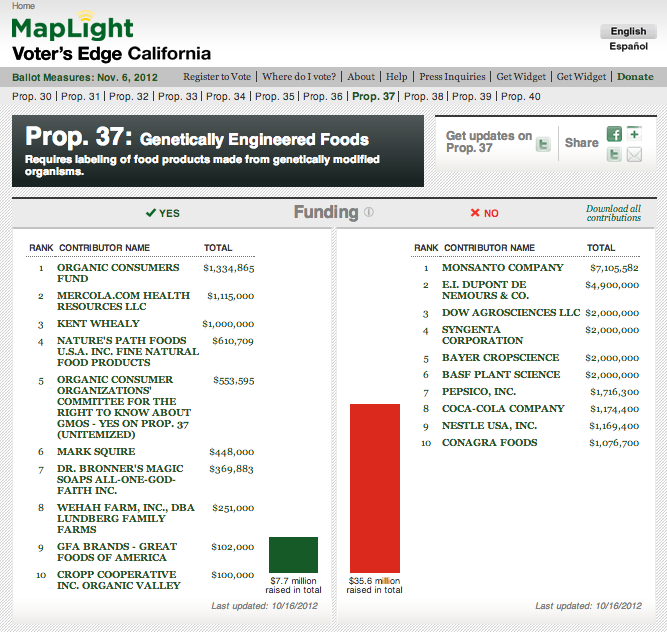 PepsiCo has also joined the push to stop GMO labeling in California with a $1.7 million contribution to No on 37. While many know the company as a giant of the soft drink industry, PepsiCo is also the nation’s largest food company, owning such brands as Tropicana and FritoLay.

Perhaps the most surprising allies to emerge in the fight against Prop 37 are the corporate parents of some of America’s best known brands behind organic, natural and GMO-free food products. Cascadian Farm, Muir Glen, Kashi, Honest Tea, Odwalla and Simply Orange are some of the brands owned by Kellogg, General Mills and Coca-Cola–food behemoths who have each donated at least $1 million to defeat Prop 37.

The fight to stop Prop 37 isn’t the first time food and agriculture industries in America have poured millions into lobbying efforts to stop proposed consumer protection regulations. Since President Obama took office in 2009, organizations in the food and beverage industry have spent more than $175 million lobbying in Washington, according to a Reuter’s special report on the relationship of the food industry to rising childhood obesity rates:

“At every level of government, the food and beverage industries won fight after fight during the last decade. They have never lost a significant political battle in the United States despite mounting scientific evidence of the role of unhealthy food and children’s marketing in obesity.”

As Michael Pollan points out in his article, the real fight fueling Prop 37 isn’t whether GMOs are harmful; it’s whether “Big Food” can successfully be regulated.

Here’s a more in-depth look at the influence profiles behind the leading industries and corporations who have spent $35.6 million fighting Prop 37:

‘Influence Explored’ takes an article from the day’s headlines and exposes the influential ways of the  entities mentioned in the article. Names and corporations are run through Sunlight’s influence tracking tools such as Influence Explorer to remind readers of the money that powers Washington.