This post was prepared in collaboration with Alexander Furnas. All graphics by Amy Cesal.

Outside money continues to pour in at a record pace this election cycle, and beyond the presidential race, the biggest general election spending totals are all in Senate races: $29.7 million in Virginia; $24.6 million in Ohio; $22.2 million in Wisconsin; $18.5 million in Nevada; $16.3 million in Montana. And counting. All told, outside groups have dropped $189.4 million into Senate races as of October 23.

Of particular interest is that Republicans are relying much more on non-party organizations – primarily Crossroads GPS and the Chamber of Commerce – that don’t have to disclose their donors and only have to report their spending within 60 days of an election. Among these types of groups, Republicans lead Democrats $56.2 million to $24.6 million in reported Senate race spending. And significantly, while party committees are limited in the amount of money they can raise from any one individual ($30,800 per cycle), groups like Crossroads GPS and the Chamber can receive unlimited contributions. By contrast, Democrats are still relying much more on the traditional party structure.

For a Sunlight overview of all outside spending, click here.

First, an overview of the outside spending, by state: 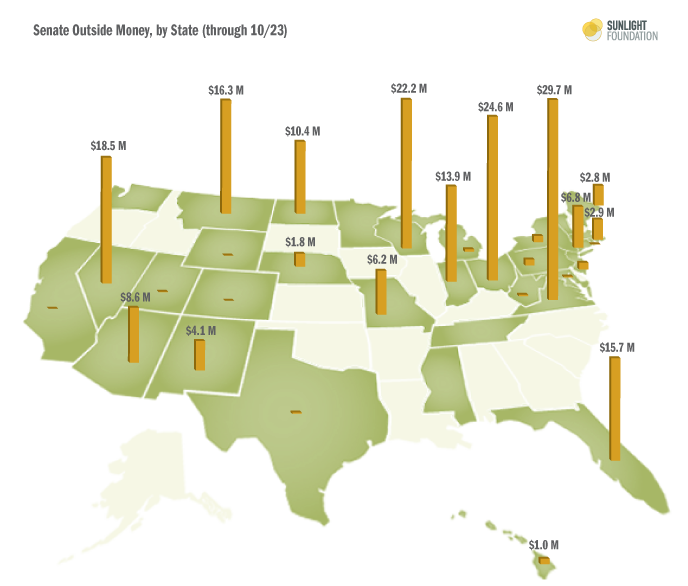 With that in place, let’s dig deeper into the data. Here are seven takeaways, with four graphs interspersed:

Republicans get more than half of their outside money from non-party, non-super PAC groups. Of the reported Republican outside money in the general election, more than half ($54.6 million out of $97.3 million) has come from non-party, non-super PAC groups. That’s primarily money from the 501(c)(4) organization Crossroads GPS ($25.3 million) and the 501(c)(6) organization, the U.S. Chamber of Commerce ($20.0 million). By contrast, the National Republican Senatorial Committee has spent $17.1 million, and the biggest Republican super PACs, Freedomworks for America and American Crossroads, have only spent $6.4 million and $5.9 million respectively. Overall, Republican super PACs have spent $24.0 million on Senate races.

Significantly, since 501(c) groups like Crossroads GPS and the Chamber of Commerce do not register with the FEC, they only have to disclose their expenditures in the 60 days leading up to the election. Likely this means they are under-reporting significant amounts of campaign spending outside of that window. Unlike super PACs and parties, these organizations also do not have to reveal their donors, and unlike parties, they can raise unlimited sums of money.

Particularly telling is that Crossroads GPS is spending more than four times what its affiliated super PAC, American Crossroads, is spending on Senate elections ($25.3 million to $5.9 million). Also particularly telling is that the National Republican Senatorial Committee (NRSC), at $17.0 million, represents just about 17.5% of Republican outside money, and has been outspent by both Crossroads GPS and the Chamber of Commerce. Interestingly, the NRSC has not yet spent in the Ohio or Florida Senate races.

Democrats still get the plurality of their outside money from the Democratic Senatorial Campaign Committee (though just barely). The top source of reported general election outside money for Democrats is the Democratic Senatorial Campaign Committee, which has spent $33.8 million so far, approximately twice what its Republican Senate committee counterpart has spent. Democrats also have the biggest super PAC in the Senate game, Majority PAC, which has spent $20.8 million (more than three times the largest Republican super PAC, Freedomworks for America, at $6.4 million). Overall, super PACs have spent $33.7 million to help Democrats, as compared to $24.0 million to help Republicans. For Democrats, super PAC spending lags party spending by just $100,000. (For Republicans, super PAC spending is ahead of party spending by about $7 million)

The non-party, non-super PAC groups (that don’t report their spending until 60 days before the election and don’t have to report their donors) have spent much less in support of Democrats ($24.6 million) than Republicans ($56.2 million). Still $24.6 million is a substantial sum. More than half of that money comes from four organizations: AFSCME ($4.5 million), Patriot Majority USA ($4.3 million), SEIU ($4.1 million), and the League of Conservation Voters ($3.9 million).

Super PACs are less than one-third of the reported outside money in the Senate. Super PACs have spent $57.7 million in Senate races. It’s a sizeable sum, but it still makes these organizations responsible for only 30.5% of the reported outside money in Senate races. They’ve still spent almost $7 million more than the party committees (who’ve spent $50.9 million), but they’re behind the non-committee non-party organizations, which have now reported $80.8 million in Senate elections, or 42.7% of all the outside money (the plurality). Of course, since these groups only have to report expenditures within 60 days of the election, they’ve in all likelihood spent substantially more than they report. However, we don’t know how much more because they don’t have to report it. Nor do we know who is funding these groups.

Half of the outside money is in just four races. There may be 33 Senate seats up for re-election, but just four of those seats – the hotly-contested races of Virginia, Ohio, Wisconsin, and Nevada – have received almost exactly half half ($95.0 million of $189.3 million) of the outside spending. Add in Montana, Florida, and Indiana, and just about three-quarters of the outside money ($141.0 of the $189.4 million) has gone into just seven races.

Conclusion: We count 130 outside groups contributing a combined $189.4 million across 33 races in the Senate general election. But half of that money comes from just four major players, and half of it is also targeted in just four states. More than half of the Republican reported outside money ($56.2 million out of $97.3 million) comes from non-party, non-super PAC groups: most prominently, Crossroads GPS ($25.3 million) and the U.S. Chamber of Commerce ($20.0 million). Neither discloses donors, both can raise unlimited sums, and both only have to report expenditures within 60 days of an election. Democrats, by contrast, still rely on the traditional party structure, the Democratic Senatorial Campaign Committee, for the plurality of their outside money at $33.8 million, followed by Majority PAC, a super PAC, at $20.8 million. Despite the disparate strategies, the parties are at near parity overall in the Senate. Whether all this money makes any ultimate difference, we will find out soon, with the election less than two weeks away.