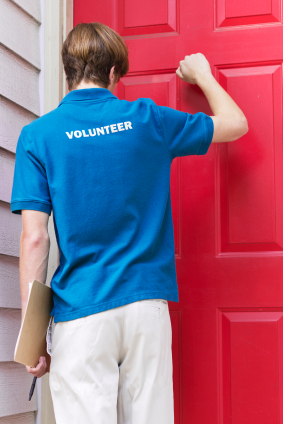 With early voting starting Saturday in Florida, a Miami-based group of community organizers and union members will be undertaking a major push across five of the battleground state’s cities to get voters to the polls.

And this group—believe it or not—is a super PAC. Yes, one of the same committees that are often described as tools of the corporate and the rich and maligned for polluting the airwaves with negative advertising.

But Florida Freedom PAC is a partnership between Florida New Majority, a community organizing group that sprung up in 2009 to empower the state’s minorities, and the Service Employees International Union of Florida. And of the $1.4 million the group has spent in October, all in one crucial swing state, not a dime has gone to TV. Instead, the money has gone towards its goal of knocking on 250,000 doors by Election Day.

The group is one of many new super PACs across the country on the left and the right that have been empowered by the Citizens United decision in ways that are not always obvious. In the 2012 election, many groups are taking advantage of the law focus on the ground game.

On the right, one of those groups is FreedomWorks for America, the super PAC affiliate of the libertarian organization by the same name that began in 1984. As Florida Freedom PAC knocks on doors for President Obama and Senator Bill Nelson, FreedomWorks is mobilizing voters to choose Mitt Romney and Rep. Connie Mack, Nelson’s challenger.

“Whoever has the best ground game is going to win a lot of these races,” said FreedomWorks spokesman Russ Walker. The TV ad market is saturated with advertisements from independent groups, with candidates having trouble introducing themselves. “The answer to that is grassroots,” Walker said.

Activities like door knocking, phone calling and sign hanging, along with sending mailers, make up most of the $11.9 million that FreedomWorks, whose chairman is former GOP House Majority Leader Dick Armey, has spent thus far. The group has given out 120,000 pro-Connie Mack and “Fire Obama” signs across the state and its employees and volunteers were involved with 30 different events across the state last weekend, according to Walker.

On the left, a similar strategy is being pursued by a laundry list of super PACs–often labor-empowered. They include the union-funded Working for Us and the super PAC of the American Federation of Government Employees. There are also non-union groups spending significant resources to direct voter contacts.  The super PAC of the Sierra Club, supporting Democrats, and largely funded by the Sierra Club's treasury, has dropped about $375,000 on canvassing, staff salaries, door hangers, voter list rentals and mailers, according to FEC filings, about one-third of its overall outlay.

It's hard to determine exactly how much of the more than $800 million spent on independent expenditures during this election has been used for this kind of activity because of the way FEC reports are filled out. But it's clear that the Supreme Court’s 2010 Citizens United decision and subsequent court rulings that paved the way for any corporation or union to set up a super PAC is opening up new streams of funding for more kinds of direct advocacy than advertising.

Court rulings also gave more latitude to unions, which can now set up super PACs to fundraise from the general public, not just union members, and advocate for a candidate to the public. Before Citizens United, unions could only use members’ traditional political action committee dues, which face contribution limits, to make expenditures to advocate for a candidate.

“Citizens United allows us to do some things that we should have been able to do and that makes us more effective,” said Jeff Hauser, a spokesman for AFL-CIO. He calls this the ironic side of Citizens United, which he labels a “disaster for democracy.”

“We think that the need for ground communications is greater than ever because of the ability of corporate-aligned candidates to flood the airwaves is clearly greater than ever before,” he said. The union has set up its largest-ever ground campaign, according to Hauser.

The AFL-CIO has set up the super PAC Workers' Voice as its primary way to deliver its message to non-union households. The super PAC has brought together nearly $13 million, making it the eighth most well-funded super PAC in the nation. Most of its funds come from unions’ general treasuries, especially the AFL-CIO itself, something that was not allowed before Citizens United.

AFL-CIO, Workers' Voice, and a nonprofit started by AFL-CIO called Working America are leaving the TV ads to other unions–such as the American Federation of State, County and Municipal Employees (an AFL-CIO affiliate) and the super PAC and traditional PAC of SEIU.

Instead, Workers' Voice is using its funds to pay organizers, canvassing costs for fliers and mailers, and to rent office space.  Workers' Voice is focusing on seven states—Florida, Ohio, Wisconsin, Michigan, Pennsylvania, Nevada and Massachusetts—to build a permanent grassroots army there, Hauser said.

But Citizens United has also allowed unions to partner with super PACs that they are not officially tied to. SEIU’s super PAC is the main funder behind Florida Freedom PAC, which has spent $3.7 million supporting the president and Democratic congressional candidates—a number that will climb to $5 million by Election Day, according to the group.

With early voting starting this weekend, Freedom Freedom PAC's organizers are making a major push, especially because the GOP legislature cut the number of early voting days from 14 to 8 last year, said Rebecca Wakefield, a spokesperson for the group. She sees the move as an attempt to reduce the votes of Democrats, who represented a larger share of early voters than Republicans in Florida in 2008, according to the United States Elections Project.

This weekend the group is coordinating efforts with churches, especially in cities like Jacksonville and Miami where clergy has a strong presence. Churches will take the lead on Sunday while Florida Freedom focuses on Saturday, putting on early voter rallies in Tampa, Miami, Orlando, Jacksonville and the Palm, Beach area. Earlier in October, the group put on canvassing rallies on a “super Saturday” that drew about 500 people across the state, Wakefield said.

The partnership with the SEIU’s Florida State Council makes sense for each party. Florida New Majority benefits from SEIU’s cash, 55,000 members and 1,100 volunteers and the union can take advantage of FNM’s roots in the community.

Spending $1.4 million in October may seem minimal compared to the ad campaigns of super PACs on the left or the right: The GOP-aligned American Crossroads has dropped $47.3 million this month and the pro-Obama Priorities USA Action has dumped $20.8 million, according to FEC filings as of Oct. 25. But all of the Florida Freedom’s money is concentrated in a swing state and these kinds of ground efforts might be more effective than TV ads, especially in the presidential campaign, as voters have been swamped with a barrage of ads about Romney and Obama for months.

Despite sharing an iconic American ideal in their names, FreedomWorks and Florida Freedom PAC do not share the same strategy this weekend. FreedomWorks will not be doing any marches to the polls with early voters in Florida. But the group will be calling early voters it has identified and will continue walking door-to-door throughout the Sunshine state, where it runs six offices and has printed over 300,000 door hangers, according to Walker.

FreedomWorks spends most of its money on Senate races, and nowhere has it dispensed more cash than the Florida contest between incumbent Democrat Bill Nelson and his Republican challenger, Rep. Connie Mack. FreedomWorks has spent $1.8 million on the race through Oct. 25. Just last weekend, the group held a “FreePAC” event in Orlando, where about 5,000 people attended a “grassroots bootcamp” and a rally featuring speakers such as media personality Glenn Beck. Last week, the super PAC spent $250,000 on mailers to encourage targeted voters to cast ballots for Mack.

Walker himself spent time last week in central Florida's I-4 Corridor, a key swing area where votes could not only determine the victors in the presidential and Senate races, and in southeastern Florida, where the group is focusing on two races: Republican Rep. Allen West versus Patrick Murphy and GOP state Rep. Adam Hasner against Democrat Lois Frankel. FreedomWorks has spent over $400,000 helping West and Hasner.

Other than Florida, FreedomWorks has for long been very active in Ohio and Indiana, where it has spent over $1 million in Senate races, and Arizona, Virginia, Pennsylvania, and Colorado according to Sunlight’s Follow the Unlimited Money and Walker.

Nevada has joined that top echelon of states of late, in response to outside polls showing a tighter race between Obama and Romney and the groups’ desire to help businessman Danny Tarkanian win a House seat, according to Walker. The group has expanded to 20 distribution centers—where canvassers pick up materials—from just a few four weeks ago and has two full-time employees in Las Vegas. The group spent $50,000 on pro-Tarkanian mailers recently.

The organization is also playing in many House races by spending about $2.2 million since the start of September. The congressional candidates that have received the most help are Rep. Joe Walsh in Illinois, local mayor Mia Love in Utah, Rep. Jeff Landry of Louisiana, Rep. Ann Marie Buerkle in New York, West, Hasner and Rep. Mike Coffman of Colorado, according to a Sunlight analysis. Along with those races, Walker said two others are particularly important for the group: Andy Barr in Kentucky and Rep. Justin Amash in Michigan.

Although FreedomWorks staffers call the group grassroots, many of its donors tell a different story. 44 percent of the super PAC’s donations have come in chunks of $25,000 or larger. It's single biggest individual donor is South Florida's Mary Stiefel, who gave $750,000, and is the sister of Florida philanthropist and seven-figure super PAC donor Barbara Stiefel. FreedomWorks also pulled in $250,000 from the company of Dallas real estate magnate Harlan Crow and $100,000 from Wisconsin Christian conservative Foster Friess. The largest single contribution was $800,000 from 501c4 arm of FreedomWorks—a tax-exempt “social welfare” organization that does not disclose its donors to the public. Still, the vast majority of the group’s over 3,000 listed donors have given in $500 checks or less.