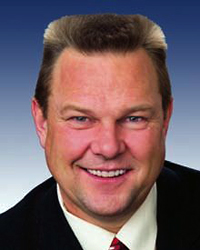 A GOP-aligned super PAC that formed just three weeks before the election and whose donors remain unknown dropped about $1 million on two key Senate races on Friday, according to recent Federal Election Commission reports.

Freedom Fund North America made the buys opposing two Democratic candidates: Montana Sen. Jon Tester, seen at right, and former North Dakota attorney general Heidi Heitkamp. The super PAC also bought one supporting Rep. Rick Berg, the Republican running against Heitkamp for the state's open Senate seat. The ads do not appear to be available on the web; the group does not have a website and its treasurer did not respond to an email.

And the donors behind the group will not be known before Election Day because the last pre-election reports were due on Oct. 25 for independent groups. The super PAC formed on Oct. 15; if it did not receive contributions by Oct. 17, Freedom Fund North America is not required to file an FEC report until Dec. 6. It's one of a number of groups that did not emerge on the political radar until this month and one of more than a dozen that have not filed their donors with the FEC. Among those, the biggest spenders are Americans for Responsible Leadership, spending more than $1.2 million to defeat President Barack Obama and Utah's lone Democratic member of Congress, Rep. Jim Matheson, and the Hardworking Americans Committee, spending $1 million to defeat Sen. Debbie Stabenow, D-Mich. Sunlight has compiled a complete list of late spenders here.

Freedom Fund North America’s treasurer, Michael G. Adams — who is also the general counsel of the Republican Governors Association — is at the center of a web of super PACs formed this year to help Republicans in a number of Senate races. Adams is also the treasurer of two other super PACs with names similar to Freedom Fund North America. Those two super PACs, which popped up earlier in 2012 to help other GOP Senate candidates, have filed paperwork with the FEC that may provide clues as to who is supporting Adams' latest venture.

One group is Maine Freedom PAC, which formed in August and ran ads in September to help Charlie Summers, the Republican candidate in Maine’s three-way Senate race. The other is Fund for Freedom Inc., which formed in January but only made its first election expenditures on Friday—some $670,000 supporting Hawaii Republican Senate candidate Linda Lingle and attacking her opponent Mazie Hirono.

Both the Maine and Hawaii PACs seem to be principally funded by three wealthy men: Billionaire media executive John Malone; Texas investor Ed Bosarge and liquor company CEO Paul Coulombe. Each of the three gave $100,000 to both committees while Coulombe gave an additional $100,000 to the Maine group through a trust.

The Colorado-based Malone is the chairman and founder of Liberty Media, which owns entertainment company Live Nation and the Atlanta Braves and has an interest in SiriusXM Radio and the TV channel Starz. Through a spokesperson, he declined to comment Monday as to whether he gave to Freedom Fund North America. Liberty Media has spent $7.7 million lobbying during this session of Congress, mostly on rules and legislation related to TV and radio. Its CEO Gregory Maffei has donated a combined $150,000 to the super PACs American Crossroads and Restore Our Future. Restore Our Future backs GOP presidential nominee Mitt Romney. American Crossroads is working to help elect Romney and other Republican candidates.

Bosarge of Quantlab Financial is the only one of the trio behind the Maine- and Hawaii-focused super PACs to give to other super PACs this year. The Houston investor has donated a total of $1.3 million, mostly split between American Crossroads and Restore Our Future. Quantlab has spent $180,000 to lobby this year, all focused on “issues related to automated, proprietary trading firms,” according to lobbying reports. That appears to be connected to the so-called Volcker Rule, part of the 2010 Dodd-Frank legislation that aims to limit risky bets that large banks can make with their own money. The New Maine Times reports that Bosarge has a summer home in Southport Island. He has contributed nearly $500,000 to the Maine GOP since 2010, according to the National Institute on Money and State Politics.

Coulombe, of Florida, also has a Maine connection. He owns White Rock Distilleries, liquor distribution and branding company in the state. The company sold its Pinnacle Vodka brand to Jim Beam for $605 million earlier this year.

Bosarge and Coulombe could not be reached for comment at the time of posting.

If these three men are behind Adams’ latest super PAC, their money could go a long way because TV ad spots are relatively cheap in Montana and North Dakota. Montana leads all other races in the number of broadcast TV ads aired from Oct. 1 to 21, according to a Wesleyan Media Project analysis of CMAG/Kantar data. But 14 Senate races cost more during that time.

In all, outside groups have dropped $21.6 million on independent expenditures in Montana — sixth most in the nation, according to FEC reports. The GOP group American Crossroads made an $800,000 ad purchase there on Oct. 23. On the same day, Rehberg was smacked with an buy of about the same size from the pro-Democratic Majority PAC, according to FEC records.

Another strange TV ad surfaced criticizing Rehberg on Friday. A group called the Montana Hunters and Anglers Leadership Fund dropped $500,000 opposing him. But instead of calling on voters to support Tester, it recommended a vote for the Libertarian candidate in the race, Dan Cox. The Montana Hunters and Anglers received a $410,000 contribution by the pro-Democrat nonprofit League of Conservation Voters, but the LCV denies its contribution was intended to underwrite the ad.

The North Dakota race has been less crowded with advertisers but has still cost independent groups $13.5 million. In addition to Freedom Fund North America, Republican-aligned groups that bought anti-Heitkamp ads last week included Now or Never PAC and Crossroads GPS. Each group spent about $200,000. But Democratic groups pumped more money into the race during the same period:  Majority PAC and the Democratic Senatorial Campaign Committee underwrote a combined $1.2 million in anti-Berg ads.

Adams also does the paperwork for an 11th hour super PAC called America 360, a group that has dumped about $850,000 in mailers supporting Sen. Scott Brown in Massachusetts since the start of October. Only about three fourths of those donors have been made public. $500,000 of the disclosed funding came from a Florida company called Oxbow Carbon LLC, owned by William Koch, brother to Charles and David Koch, the businessmen who plan to spend $400 million financing a slew of groups to influence the 2012 election.

Adams' most well-stocked group, the super PAC of the Republican Governors Association itself, has raised over $8 million and often distributes that to state GOP committees. That group's super PAC sent nearly $700,000 to the Montana Republican Party in early October, which has been distributing mailers against Tester. Bosarge, the liquor CEO, has donated $100,000 to the RGA in 2012 and Liberty Media, chaired by Malone, chipped in $100,000 from 2009 to 2011, according to Internal Revenue Service reports.