With the end of the 2012 election season, so too comes the conclusion of a seemingly infinite number of campaign advertisements. Of course, there is a finite number of political ads that ran this cycle and we at Ad Hawk have placed that figure at more than 4,000. That number is based on our work gathering and identifying the ads in order to help the public learn more about the sources of funding behind them.

The Ad Hawk project collected and indexed advertisements released by campaigns in order to inform voters about the ads’ sponsors and funding sources. As a result, we have amassed a comprehensive and searchable database of this year’s presidential, congressional and third-party advertisements focused on federal issues and candidates.

Every day, Ad Hawk scans more than 300 of public feeds associated with campaigns and committees. Each time one of those organizations posts a new video, we determine if it is an ad, and if so, we mark it in our database. So far, we’ve considered nearly 8,000 videos, marking more than half as ads. As the election approaches, we’ve found that organizations are releasing ads at an accelerating rate. It’s enough to keep us from turning on the television in our free time.

We knew we were collecting a lot, but one question still nagged at us: were we collecting enough? It’s difficult to estimate how extensive our coverage is, since there is no publicly available record of the advertisements that are published during a campaign season. We have noticed, however, that the Ad Hawk system’s collection rate seems to be consistent with the recent explosion in outside spending in the push before election day. 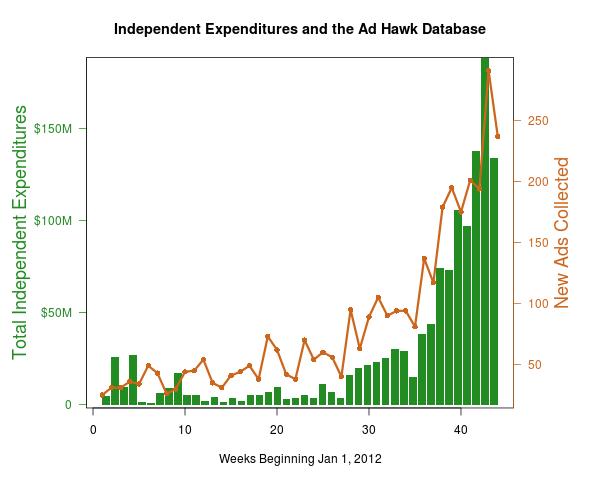 Using an environment for statistical computing called “R,” we performed a cross-correlation (R’s ccf() function) of ads released and outside spending to find out exactly how well the correlate. We also checked to see if there is a lag between spending and ad releases, to account for the possibility that ads come out days after funds are spent. As it turned out, though, spending and ad releases had nearly no lag difference. 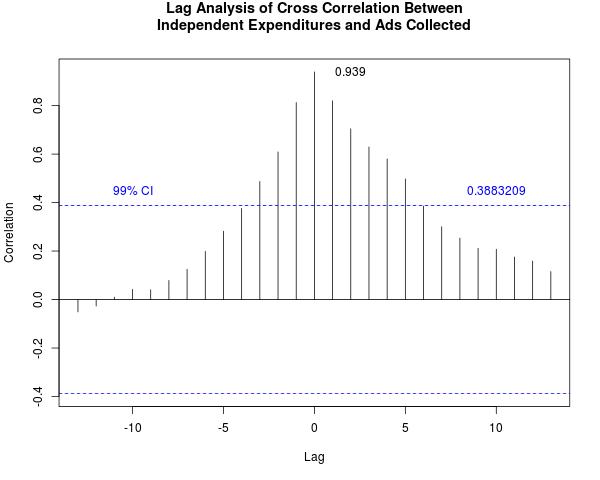 This seems to support the notion that money spent by outside groups is immediately seen in the form of new messages being pushed to the public. This, we believe, demonstrates the importance of projects like Ad Hawk and Political Ad Sleuth, which try to show the money trail between advertisements and the people, organizations, and interests behind them. All the more reason, we would argue, for the FCC to require records of advertising contracts signed between media outlets and committees immediately available to the public online and in machine readable format.