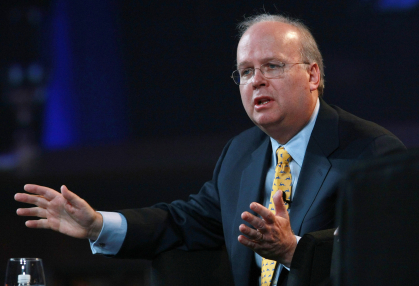 American Crossroads, part of an outside spending combine run by GOP political guru Karl Rove, has broken another campaign milestone: nine digits. As of Nov. 6, the super PAC's overall spending is over $104 million. (For a detailed look at how this money has been raised and spent, see Sunlight's tally on Follow the Unlimited Money. )

The astronomical numbers also suggest that American Crossroads raised $20 million in a very short time: As of Oct. 17, the super PAC had reported $80 million in donations in a report filed with the Federal Election Commission, the group's last accounting before Election Day. Jonathan Collegio, a spokesman, said the late influx of cash came from new donors–not from Crossroad GPS, a non-profit "social welfare" organization that is also run by Rove (seen at right), and that doesn't have to disclose its donors because of its tax status.

American Crossroads' spending spree is all the more remarkable because it represents less than half of Rove's outside spending operation. Crossroads GPS has spent at least $130 million, bringing the total from the pair of political powerhouses more than $240 million. Sunlight calculated this estimate by combining the total spending that Crossroads GPS has disclosed since Sept. 7, when the FEC required outside spenders to begin disclosing all of their voter communications, with a total of $60 million that the group reported spending, via press releases, before that. But it's impossible to verify whether Crossroads GPS is reporting its earlier spending accurately: The FEC does not require disclosure of "electioneering" — communications that can strongly praise or denigrate a candidate but that stop short of calling for a candidate's election or defeat — unless they are made within specific windows: two months prior to a general election or a month before a primary.

Asked if late spending might miss early voters who've already gone to the polls, Collegio disagreed. "The undecided voters whom everyone is trying to persuade have not yet voted by virtue of the fact that they're undecided," he said.

Collegio said that Crossroads GPS will continue spending even after the election, focusing on issues before Congress. The group, he claimed, "played a large part in framing the debate in the lame duck session of 2010 on taxes and the extension of the 2001 and 2003 tax cuts, and we expect to be working against any kind of tax increases in the lame duck session of 2012 as well."