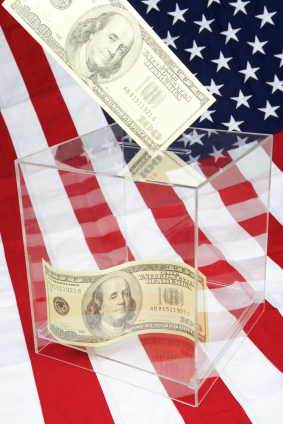 For the candidates, it's all over except for the voting, but for those of us who follow money in politics, it will take months to close the books on what will be the most expensive election in history.

In the wake of the Supreme Court's ruling in the Citizens United, outside groups spent more than $1 billion to influence the election. Included in that total: Nearly $300 million from shadowy groups that do not disclose their donors.

For the first time, both major party candidates opted out of the Presidential Campaign Fund, the taxpayer-funded kitty for the general election, and courted wealthy donors right up to Election Day. Since he kicked off his campaign in April 2011, President Barack Obama raised nearly $1 billion for his campaign and the Democratic National Committee, while Mitt Romney's haul amounted to $826.9 million.

The Federal Election Commission reports that House candidates have raised more than $1 billion, while those vying for Senate seats got donors to pony up $688 million. Political action committees–the mild mannered Clark Kent variety that donate to candidates, not the super PACs that are not supposed to coordinate with those running for office–raised $1.1 billion of their own.

Sorting out how all that money–much of it given by individuals and organizations with business before Congress and the executive branch–will affect the lives of average citizens is a daunting task we will tackle in the months ahead. Meanwhile, here are a few lessons we learned in the brave new world of unlimited political money:

And now, for a bit of good news:

Sunlight is the best of disinfectants. At least 3,000 people have participated in Sunlight Live, a new tool that allows viewers to engage with each other and with panels of experts during live news events. We used it to cover both presidential nominating conventions as well as the fall presidential and vice presidential debates. Sunlight Academy, which launched earlier this year, offers training on how to use Sunlight's powerful tech tools to become more informed and empowered citizens. More and 750 users have registered so far. We've also trained hundreds of reporters across the country on our Follow the Unlimited Money tool and other Sunlight resources, like Influence Explorer and Party Time. And the Sunlight Foundation, Free Press and Pro Publica have worked together to coordinate efforts to make the political ad files more transparent.