With the election over, a Congress full of lame ducks — along with next year's class of soon-to-be sworn-in lawmakers, ready for freshmen orientation — returns to Washington next week. Lobbyists and special interests that opened their wallets for candidates are poised to call in  chits in a tense environment dominated by the budget impasse that threatens to impose sweeping automatic cuts to defense and social programs if Congress doesn't act. 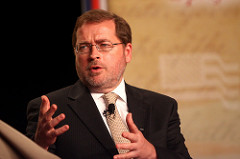 Top CEOs of more than 80 companies issued a statement on October 25 calling on Congress to solve the issue by considering tax increases along with spending cuts. In a post-election press conference, House Speaker John Boehner, R-Ohio, indicated a willingness to talk taxes, but that topic has been like wolfbane for conservative Republicans. Complicating prospects for consensus: One of the few groups backing GOP candidates that registered a better-than .500 fall batting average in Tuesday's elections, Americans for Tax Reform. Its founder, Grover Norquist, seen at right, requires candidates it supports to sign a pledge to oppose tax hikes.

Moreover, the big class of 2010 GOP freshmen swept in by the tea party's anti-big government, anti-tax wave remains largely intact and its members owe their seats to many of the same groups that lost big when betting on Romney.

Even if Congress came to consensus on the budget issue–far from a sure thing–expect to see fierce lobbying over the details by different monied actors. So it's worth looking at how Tuesday's results may have shifted the balance of power.

The biggest-winning spenders: labor, labor, and labor. And womens and environmental groups. And certain wealthy mega-donors with a liberal bent, some with obvious business concerns. The biggest losers: American Crossroads and its sister organization Crossroads GPS, which spent more than $100 million and got very little return for all its bucks, as well as the U.S. Chamber of Commerce, which has fiercely opposed two of President Obama's signature legislative achievements: the health care law and the Dodd-Frank financial reforms. Overall, the GOP-aligned groups spent far more on outside spending than those supporting Obama and other Democrats, making their "return on investment" particularly poor.

Beyond that, the picture is more complicated. While most industries and interests clearly favored one party's candidate over the other, and individual mega-donors nearly always do so, the bigger takeaway is the old story of how companies and interests hedge their bets.

Labor weighed in overwhelmingly for Obama, both in terms of direct contributions and super PAC spending, much of the effort going to get out the vote (GOTV) efforts. Labor was also a big factor in a number of key congressional races. For example, SEIU dropped a total of some $30 million on outside spending and earned a "return on investment" of between 70% and 84%, according to Sunlight's calculations. Labor spending was key in some hotly contested congressional races that put Democrats in office, including Sen.-elect Tammy Baldwin, Wisc.; Sen.-elect Elizabeth Warren, Mass.; Sen.Sherrod Brown of Ohio, Sen.-elect Tim Kaine of Virginia, Rep.-elect Steven Horsford of Nevada and Rep.-elect Cheri Bustos of Illinois. 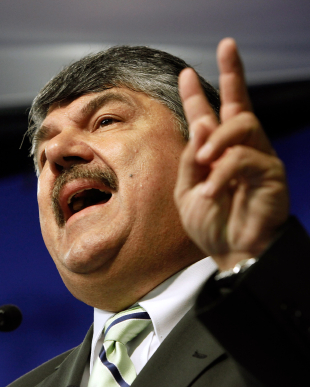 But individual unions often push for far more parochial agendas that can align with industry and sometimes divide the labor movement itself.  For example, the International Association of Machinists is reportedly joining Lockheed Martin in opposing automatic defense cuts as part of the budget impasse despite having led a recent strike against the company. AFSCME will be looking out for the salaries and benefits of the federal work force, on which President Barack Obama has offered consessions to GOP critics in the past.  The United Mine Workers, an affiliate of the AFL-CIO, itself sat out the presidential race after endorsing Obama in 2008. The union is unhappy about the Environmental Protection Agency's promulgation of new Clean Air regulations that impact the coal industry.

Women Vote!, a super PAC affiliated with Emily's List, spent $7.9 million on key Senate races and a number of successful House races. The group, along with Planned Parenthood, which spent more than $12 million all told through affilates, will watch women's health and abortion issues closely. Women's issues were a flashpoint in the failed campaigns of would-be senators Todd Akin in Missouri and Richard Mourdock in  Indiana when both made remarks about rape from which the GOP leadership quickly tried to distance itself. In the past, congressional Democratic leaders and Obama have offered concessions at critical moments on issues important to Democratic women's groups, for example offering a deal during the health care reform debate to secure the vote of Michigan Rep. Bart Stupak, an anti-abortion Democrat.

The League of Conservation Voters spent $10.9 million on the elections and earned a "return on investment" of 66%, weighing in with more than $1.4 million in the hotly contested Montana Senate race where the Democrat incumbent, Jon Tester, won the race. Indeed  group was the most generous outside spender supporting Tester's campaign. The group was also succesful in its support of a number of  competitive House races, such as the successful bids of Rep.-elect Julia Brownley in California and Rep. Pete Gallego of Texas. Environmental groups will be lobbying on a host of issues, most notably global warming–a topic that both Romney and Obama avoided during the presidential debates but which has garnered new attention in the wake of super storm Sandy's devestation of New York and New Jersey.

But with the exception of labor, most of these groups' spending pale in comparison to industries that have traditionally funded campaigns and continued to do so in the 2012 elections, both through direct campaign contributions and by contributing though connected individuals to super PACs.

Wall Street put its muscle behind Republican Mitt Romney, largely because of displeasure over what was seen as the demonization of wealthy financial executives. the passage and implementation of the Dodd-Frank financial reform law, and President Barack Obama's sharp attacks of Romney's record at Bain Capital. But one of the top donors to Obama's Super PAC, Priorities USA, was James Simons, founder of Renaissance Technologies. That firm is the second top donor among securities and investment donors in this election, according to the Center for Responsive Politics; Simon's contributions were balanced by Robert Mercer, current co-chair of the firm, who contributed more than $4 million to several GOP Super PACs.

Simons is considered a pioneer in using "quant" methods to predict markets, using mathematical models and computers. Shortly after the financial meltdown of 2008, Simons testified before Congress. He placed the blame for the crisis largely at the feet of the ratings agencies and argued that hedge funds did not require additional regulation, although he was in favor of greater oversight of the markets in general.

The company's reported lobbying increased significantly after the crisis leading up to the passage of the Dodd-Frank financial reform law and continuing after. Most recently, the company has reported hiring lobbyists to work on taxation issues affecting hedge funds. Hedge funds are fighting proposals to tax "carried interest" at regular rates; although the House has voted several times to close the loophole, efforts have founded in the Senate. During the vice presidential debates, Vice President Joe Biden accused Republicans of favoring the loophole.

Some of Obama's top mega-donors are from Hollywood, such as Jeffrey Katzenberg. The communications industry overall favored the president, but it nevertheless still sent $6.4 million directly to Romney's campaign. Katzenberg, the CEO of Dreamworks has been a longtime supporter of Obama and Democratic causes and has hosted Obama fundraisers in his Hollywood home. He's been a guest numerous times in the Obama White House and has had private meetings with top administration aides.

While his company hasn't registered to lobby, this "stealthy wealthy" donor has had strong business interests that got high level attention. Vice President Joe Biden himself was involved in getting the Chinese government to adhere to a World Trade Organization (WTO) rulling that the country's use of state owned companies to distribute foreign films was a trade violation. Biden not only closed the deal, but after consulting with Katzenberg and other movie executives, negotiated the percentage that American companies would receive for their films. On the same day that deal was announced, Katzenberg also announced the creation of Oriental Dreamworks, which, because it would produce films in China, would not be subject to quotas.

The Motion Picture Association of America, which supports Democrats and Republicans alike and is headed by former Sen. Chris Dodd, a Democrat, is a powerful lobby on the Hill represented by 28 in-house and for-hire lobbyists. Top on the agenda this year was legislation to stop online pirating, known as SOPA and PIPA, which was opposed by new media companies such as Facebook and Google and died in Congress. Trade agreements are also big ticket items for the trade association (see: Katzenberg.)

Meanwhile, other industries were not necessarily so strongly partisan. The health care sector, for example, contributed $17.3 million directly to Obama versus $15.4 million to Romney. To enact the health care law, the Obama adminstration cut deals with major sectors of the health care interests, most notably the pharmaceutical industry. As federal agencies continue to implement the law and a hostile GOP-led House to launch legislative attacks against it, the health care sector has already reported spending more than half a billion this year on lobbying.

Agribusiness favored Romney heavily but still gave Obama nearly $2 million in direct contributions. The sector faces unfinished business in the farm bill, which the Senate passed last spring but is still being considered in the House. Both chambers are aiming for cuts in agricultural programs that wil be fought fiercely. The sugar industry, for example, has successfully fought off attempts to reform a tariff program that props up sugar prices for many years, despite opposition by a coalition of candy companies.

Agricultural interests have also been generous to returning Sens. Debbie Stabenow, D-Mich., Amy Klobuchar, D-Minn. and Kirsten Gillibrand, D-N.Y. Stabenow is chairman of the Senate Agriculture Committee and Klobuchar and Gillibrand are members. All three went to bat in 2011 for the food industry lobby in criticizing proposed voluntary guidelines on marketing food to children, signing on to this letter to the Federal Trade Commission (FTC). Returning Sen. Claire McCaskill, D-Mo., a member of the Senate Commerce Committee, asked pointed critical questions about the guidelines during a hearing on the renomination of FTC chairman Jon Leibowtiz. She has gotten more than $200,000 from agribusiness, and also includes Time Warner, which lobbied on the guidelines, as a top donor.

The energy sector also put most of direct contributions toward Romney's campaign. Romney hit Obama hard during the debates with charges that Obama wasn't doing enough to drill on public lands and that he was hostile toward coal. The American Petroleum Institute (API), a major energy trade association, lobbies on these issues. But it also weighs in areas not immediately obvious. For example, it recently filed suit in federal court arguing that federal regulators reached beyond congressional intent when requiring energy companies to report payments to foreign governments, a provision of the Dodd-Frank financial reform law.