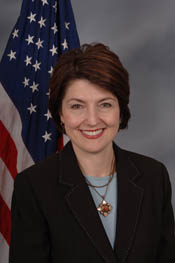 It looks like the Republican establishment will win one and lose one as it heads into leadership elections today on Capitol Hill. As always, campaign fundraising is playing a major role in the contests.

In the Senate, Minority Leader Mitch McConnell, R-Ky., failed to convince two fundraising powerhouses, Sens. Marco Rubio, R-Fla., and Rob Portman, R-Ohio — two men that may be eyeing a run at the White House in 2016 — to take on the task of raising money for the 2014 crop of GOP Senate candidates. That means the job is likely to go to Sen. Jerry Moran, a Kansan who has cultivated ties to the Tea Party. The Hill is reporting that some have questioned Moran's ability to raise the necessary stockpiles of cash.

In the House, Rep. Tom Price, a Georgia Republican and a favorite of his party's conservative wing, looks to have too much fundraising firepower opposing him in today’s leadership battle against a member of Team Boehner, Cathy McMorris Rodgers of Washington, pictured at right. Both are vying to chair the House Republican Conference, the No. 4 leadership spot.

Looking for (wo)man power in the House

It’s been reported that McMorris Rodgers has the tacit support of the top three House GOP leaders: Speaker John Boehner, R-Ohio, House Majority Leader Eric Cantor, R-Va., and House Majority Whip Kevin McCarthy, R-Calif. She's currently conference vice-chair, a position that puts her on the seventh rung of the Republican leadership ladder. As the only woman on the GOP House leadership team, she provides outreach to a voting bloc where the Republicans are far behind and would like to catch up. She was also Mitt Romney’s chief liaison to House members.

The vote may come down to who is the better “team player,” as one leadership aide said. Translation: Who can raise more dough. McMorris Rodgers touted her skills in a Dear Colleague letter last week. She wrote that she has raised more than $1 million for the National Republican Congressional Committee and contributed over $300,000 directly, visiting more than 51 congressional districts. The $1 million McMorris Rodgers cites may represent money she raised as a special guest at NRCC fundraisers. Her leadership PAC sent just $12,000 directly to the NRCC this cycle. The $300,000 she says she gave directly for candidates seems to include the 2010 and 2012 elections. According to the Center for Responsive Politics , she gave $126,000 in 2010 and $145,000 for the recent election as of Oct. 17, the date of the latest report.

Meanwhile, Price is no fundraising slouch, though he did not mention it in a video he sent his colleagues seeking their support. A review of Price’s donations show much larger direct giving to the NRCC—a total of $589,000—mostly in transfers from his campaign committee. He also contributed double the amount to colleagues ($300,000) that McMorris Rodgers did for the 2012 election.

But the real key to today's election may be fundraising by the candidates' connections.  Ryan and Hensarling have been prolific fundraisers for their House colleagues, but they trail Boehner, Cantor and McCarthy.

Boehner’s various committees transferred $22.4 million to the National Republican Congressional Committee for the 2012 election, according to an analysis of Federal Election Commission records. Over $11 million of that total came from his campaign committee, Friends of John Boehner, and more than $10 million came from his joint fundraising committee that splits proceeds between his reelection campaign, the NRCC, and the Ohio Republican Party. Meanwhile, his leadership PAC, the Freedom Project, and other committees such as his campaign account, combined to give $2.4 million directly to 2012 congressional candidates.

Not to mention a super PAC associated with Boehner called the Congressional Leadership Fund that helped members in close contests like Rep. Jim Renacci, R-Ohio, to victory. In all, the fund dropped $9.5 million on independent expenditures in various races. Similarly, the super PAC and its sister nonprofit tied to Eric Cantor spent $7.6 million this election.

Cantor’s leadership PAC, ERIC PAC, is the single committee that gave the most to House candidates this cycle—at about $2 million, according to CRP. Boehner and McCarthy’s Leadership PACs hold the number two and number three slots. Ryan and Hensarling are the next two most prolific fundraisers, but neither broke the $1 million mark.

Tea Party backs into power in the Senate

In the Senate, Texas Republican John Cornyn, who headed the National Republican Senatorial Committee for the last two election cycles, is moving up to become McConnell's chief deputy. In addition to his fundraising on behalf of the NRSC, Cornyn's leadership PAC has grown more active over the past few election cycles, according to CRP, contributing to his clout in the Senate. Alamo PAC donated $190,000 to 2012 Republican Senate candidates — six of whom will sit in the 113th Congress and vote on party leadership Wednesday. Alamo sent another $160,000 to other PACs and party committees, including the National Republican Senatorial Committee and the Target State Victory Fund.

Like McConnell, Cornyn has tangled with Tea Party forces — endorsing Gov. Charlie Crist (who later defected to the Democratic Party) over Rubio in the 2010 Florida election. This year, Cornyn kept the NRSC out of the primaries — and got several Tea Party candidates who blew golden opportunities for GOP pick ups in Missouri and Indiana.

Nonetheless, it seems likely he'll be replaced at the NRSC by Moran, who is close to the Tea Party wing.  The Kansan appeared to be the only candidate in the race as of Tuesday evening, when Portman announced he would not seek the NRSC chairmanship. Portman's leadership PAC, Promoting Our Republican Team, was much more active than Moran's, which might have shifted the votes had Portman announced his candidacy. PORT PAC contributed 61 percent more than Moran's Eisenhower PAC to candidates, PACs, and party committees during the 2012 election. Senators sitting in next year's Congress — the only ones able to vote for party leadership — received about 50 percent more from PORT PAC than from Eisenhower PAC.