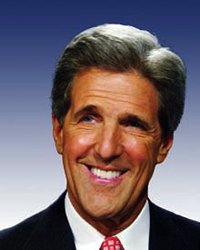 Sen. John Kerry, now reportedly under consideration for one of two top jobs in President Obama's cabinet, has spent 28 years on Capitol Hill and run for the highest office in land, during the course of which, he has left a considerable money trail.

The Massachusetts Democrat, who saw his 2004 presidential run swift boated away from him, is being mentioned as a potential replacement for either Secretary of State Hillary Clinton and Defense Secretary Leon Panetta, both of whom plan to leave office at the end of Obama's first term. The latter possibility comes as something of a surprise, since Kerry first burst onto the national scene as a Vietnam veteran opposed to that conflict (a position that came back to haunt him in his presidential race) and, as recently as September was criticizing the Republicans unyielding spending on defense.

“Their budget preserves at all costs defense spending, but recommends cuts to the foreign assistance and State Department budgets to the point that, if enacted, there would be nothing left," the senator said in a press release. "This is not a prescription for a forward-looking foreign policy.”

If he were to become defense secretary, Kerry would be in the unusual position of bearing the brunt of a fiscal punishment he helped write into law as a former member of the "Super Committee. Military spending would automatically be cut by $600 billion over 10 years under the legislation the panel helped draft if Congress does not compromise on alternative deficit reductions.

Kerry's seemingly contentious relationship with the military industrial complex has not prevented him from being its beneficiary occasionally. During the course of his career, the defense industry has given $671,000 to Kerry via individuals and PACs, according to Center for Responsive Politics. (This pales in comparison to the $28 million he has gotten from lawyers and lobbyists or the $20 million for the Finance, Insurance & Real Estate industry.)

The three most generous military contractors to Kerry’s various campaigns, according to Influence Explorer:

In addition, among the 17 lobbying and law firms that have contributed over a million dollars to Kerry’s campaign (see chart below) are a number that represent defense contractors. For example, Sullivan and Cromwell represent General Electric, which among its other endeavors, manufactures engines and computer systems for the military.

Some lobbyists and lobbying firms on Kerry's contributor list also represent the defense industry. For example, Raytheon hires lobbyists from:

If, on the other hand, Kerry becomes secretary of state, he may also find himself dealing with familiar interests As Chairman of the Senate Foreign Relations Committee, Kerry was sought after by lobbyists representing foreign governments. There are at least six mentions of Kerry in the Department of Justice's Foreign Agent Registration Database. It seems that governments also sought his attention during Arab Spring. He was also mentioned 2011 by the Korea Trade Association, before the new U.S.-Korean Trade Agreement in 2012. See chart of FARA mentions below.

Kerry is seen as likely to win easy confirmation by the Senate, and he certainly has come chits to call in there. The senator's leadership PAC, Campaign for our Country, has distributed $519,000 to fellow Democrats, a standard way of buying clout with the party. The largest recipient, The Democratic Senatorial Campaign Committee, received $95,000 from the Kerry's PAC.  In Massachusetts, Kerry gave $22,000 from his PAC to support the state party.

Among the beneficiaries of Kerry's largesse are some of the senators who would have to vote on his confirmation, were the president to nominate him to a cabinet post. Sen. Al Franken, D-Minn., was helped during the prolonged 2008 recount that led to his election with a $15,000 from Kerry's PAC. Sixteen politicians were bequeathed $10,000 each, including Senate Majority Leader Harry Reid, D-Nev., and Sens. Barbara Boxer, D-Calif., and Claire McCaskill, D-Mo. McCaskill sits on the Senate Armed Services Committee, the committee that will hold hearings on the next defense secretary's confirmation. Boxer is a member of the Foreign Relations Committee, which would decide whether to recommend confirmation of Kerry — the panel's current chairman — to be secretary of state.

Contributions to Kerry's committees by legal and lobbying PACs and individuals