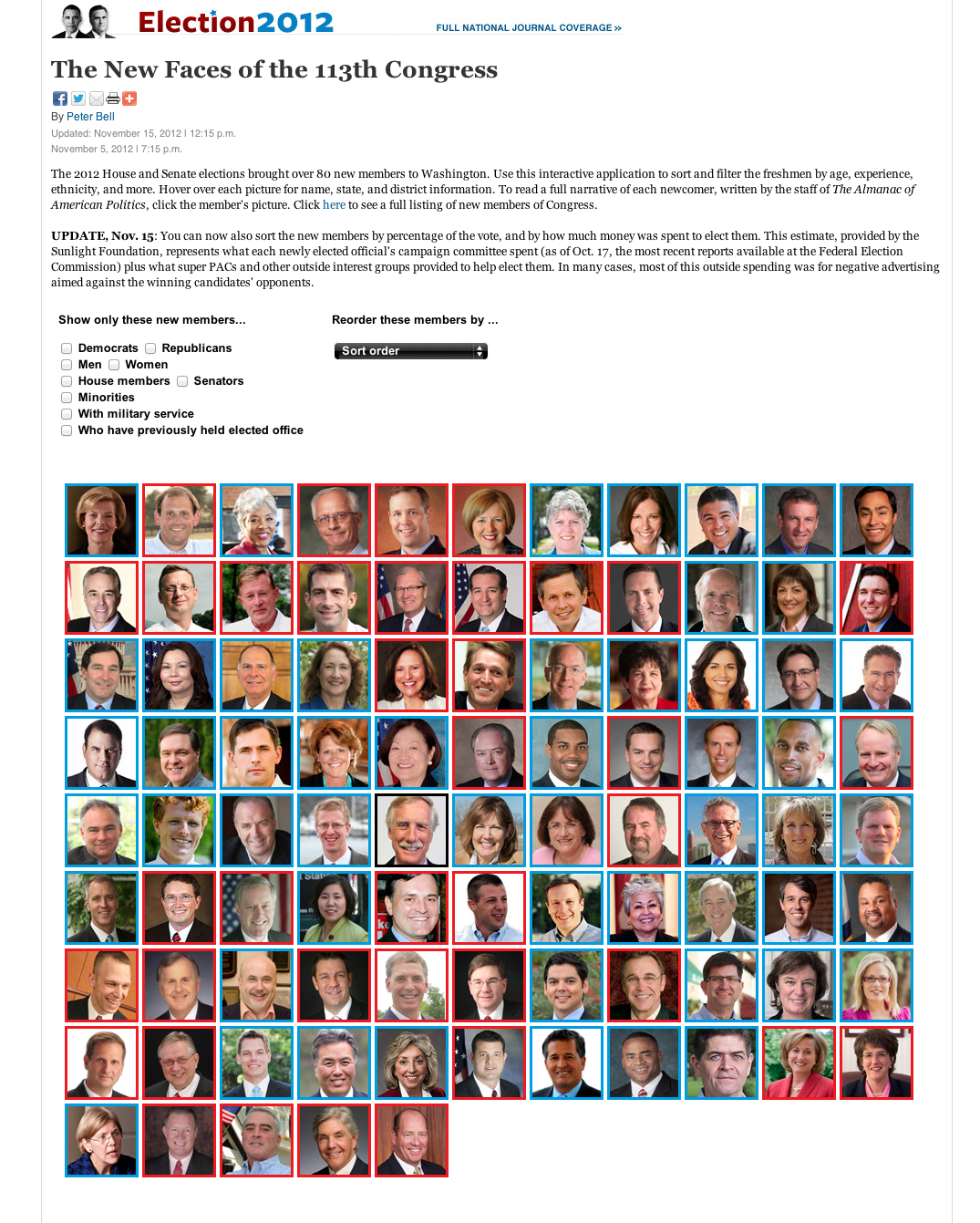 In stark contrast to the current crop of House freshmen, which we reported on extensively earlier this year, the soon-to-be newly sworn in members of the 113th Congress is considerably more balanced politically; however, analysts warn that it will likely be the most divided class yet.

Of the 89 new House members taking their oaths of office for the first time in January, 2011, after an election marked by a Tea Party tide, just nine were Democrats. So far this year (a few races remain to be called), there are 74 first-timers slated to take office next year, 44 Democrats and 30 Republicans. The differences among these members go deeper than party labels, and can be identified with a quick glance at National Journal's deceptively simple graphic. (Note: NJ's graphic also includes newly elected Senate freshmen and seven former House members who will be making comebacks to Congress. Full disclosure: Sunlight provided campaign finance data for the page.)

Use NJ's sorting tools and it's plain that the incoming Democratic class — which was notably diverse last year, despite it's small size — has grown even more diverse. Women and minorities are the face of this year's Democratic class, outnumbering white males and producing, for the first time in congressional history, a party caucus in which white males are a minority.

On the Republican side, the freshmen class has grown even whiter and more male-dominated than last year's class, which was by no means diverse. Analysts believe the demographics of the two parties hint at a growing divide between ideologies.

"It's basically a sign that both parties are distilling to their core, and they are living in parallel universes," David Wasserman of the non-partisan Cook Political Report, who first predicted the milestone, told CNN.

Like last year's class, this class continues to infuse fresh blood, with almost a quarter of the freshmen boasting no previous political experience. This means fewer ties to Washington, but it also means more room for political gaffes. For this reason, we've kept an eye out for the newcomers on Politwoops, Sunlight's database of deleted tweets by politicians. So far, the incoming freshmen have dodged trouble on the web, following the careful footsteps of last year's freshmen, who kept a pretty clean slate on Politwoops with just a few slip-ups.

Once they're in Congress, we'll be watching to see what new material they add to Capitol Words.