As we continue to debate the impact that money had on the 2012 federal races, along comes a very intriguing paper that looks at the question of spending a bit differently. And finds some rather significant effects.

To get a handle on the effect, Hall took advantage of the fact that 16 states have removed or implemented corporate contribution bans since 1950.

Using a few fancy methods to rule out other factors, he put the effect of a state ban on corporate contributions at between an 8.8 and 9.5 percentage point boost in the share of Democratic seats in the state senate.

Here’s a telling graph from Hall’s paper, which also highlights how there is a cumulative effect to the ban: 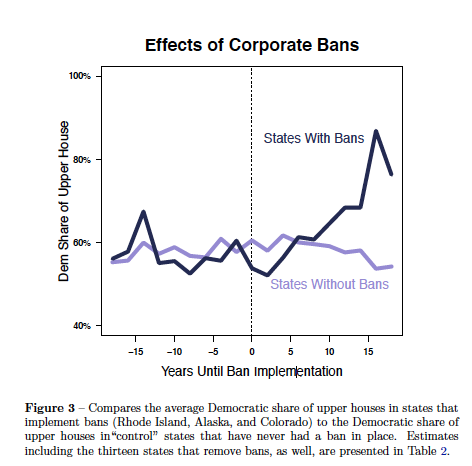 All told, Hall estimated that a new contribution ban leads to a 20 percent increase in the likelihood that the Democrats will be the majority party in the state senate.

Interestingly, the effects only seem to apply to upper houses in state legislatures. The lower houses are not noticeably affected by the bans, perhaps because contribution levels are lower in those races to begin with.

Hall is cautious in his conclusion: “If people feel that campaign spending ought not to have a significant impact on which party controls the legislature, then the results in this paper are suggestive evidence that public financing of elections, or any other reform which ensures an equal distribution of campaign contributions across the two parties, might lead to elections in which the effects of money cancel out.”

The takeaway here seems to be that if we pull back and look at the macro-level of partisan control, there appears to be some impact. Fundraising advantages do translate into seat shares.

The research also confirms the common suspicion that Republicans benefit more than Democrats from unlimited corporate contributions. The finding is that states saw lowered shares of money going to Republicans when they put in place contributions, and this in turn helped more Democrats get elected.

Read the paper here. It’s worth a look.