Once the votes in election 2012 were counted, the Sunlight Foundation did some figuring of our own, calculating the percentage of money spent by outside groups in elections that helped winning candidates or hurt losing ones; we called that percentage return on investment (ROI). Mark your calendars for Thursday, Nov 29, at 1 p.m. for a webinar explaining how we did it, including a close up look at the ROI data. We will also debut our Congressional ROI data set, which shows how groups fared when the massive amounts of presidential election spending are removed from the totals.

In this webinar we will show you how to dive into the data on a more granular level to tell the story behind the numbers. Sign up for the webinar here.

What is return on investment?

In the case of outside money groups, it is the percent of money in an election that went toward the desired result.

How do we calculate ROI?

We created a computer program to calculate ROI for outside spenders.

First the program looks at the line item data from a download of the independent expenditure data from Follow The Unlimited Money. The program loops through the data and totals primary and special election spending separately.  It merges this information with a spreadsheet of election results–who won, who lost–that we created in-house.

We match the election results with the spending by the group–was it supporting the winner, opposing the loser or vice-versa, and keep a running total of how much money went toward supporting winning candidates, or opposing losing candidates and how many candidates fit those categories.

How to dive into the data

If you want more information than was in the original post, the links will take you to the official Follow the Unlimited Money profiles of the groups that include expenditures that do not count toward ROI totals. If you want to dissect the ROI totals, use the csv tables.

There are more than 600 independent expenditure groups featured in the Org file download. This sheet has the names of organizations making expenditures, their FEC ID numbers, along with a breakdown of their spending and candidate counts.

If you would like to further dissect the information, download the IE file. This file aggregates independent expenditures so there is one line per candidate, per PAC.

With this file you can see which candidates the organization supported or opposed.

We will also have Congress only, House only and Senate only subsets of the organizational data in time for the webinar.

Why is it called return on investment?

Sophisticated donors and the groups they support are waging their own, independent political campaigns with an eye toward producing specific results. By favoring winning candidates in the election, this kind of investment can pay off in two ways – The composition of elected officials changes to favor your agenda. Additionally, you have access to powerful people that are grateful for support or, perhaps, fearful of future retribution.

While it’s hard to quantify access, it is easy to measure effective spending (that which defeated candidates opposed or supported candidates who won). That is what our return on investment metric does.

It is safe to say that the goal of independent expenditure groups is to advance their cause by winning elections. When groups pick winners, they have the power to advance an ideological agenda, or call in personal or professional favors.

These groups don’t even have to have affected the race in a statistically significant way to have influence over a candidate. Appearing to make a difference in a race can be just as powerful, and big donors generally get their phone calls returned.

Why aren’t the Presidential Super PACs on the list?

Politics is a risky game. The idea of Return on Investment is to summarize how effectively groups that did a lot of spending on multiple races fared in the election. If a group only played in one race, they were playing an all-or-nothing game; the ROI for Priorities USA was 100 percent while the ROI for Restore Our Future was zero. Of course, summaries of their activity are available in the download.

While all groups ideally, would want to win every election they spend in, the goal of every multi-candidate group is probably not to get 100 percent ROI (if that alone were the goal, they’d spend only on the safest elections; of course, the opposite is true–the vast majority of spending comes in closely contested races).

Why isn’t our total higher?

Believe it or not, some groups contacted Sunlight to challenge the ROI figures we calculated. Here are the most common reasons our numbers might differ from theirs:

Messy paperwork: The filing below shows why it can be hard to use FEC data. The following is an example from a March 2011 monthly filing of the National Rifle Association of America Political Victory Fund: 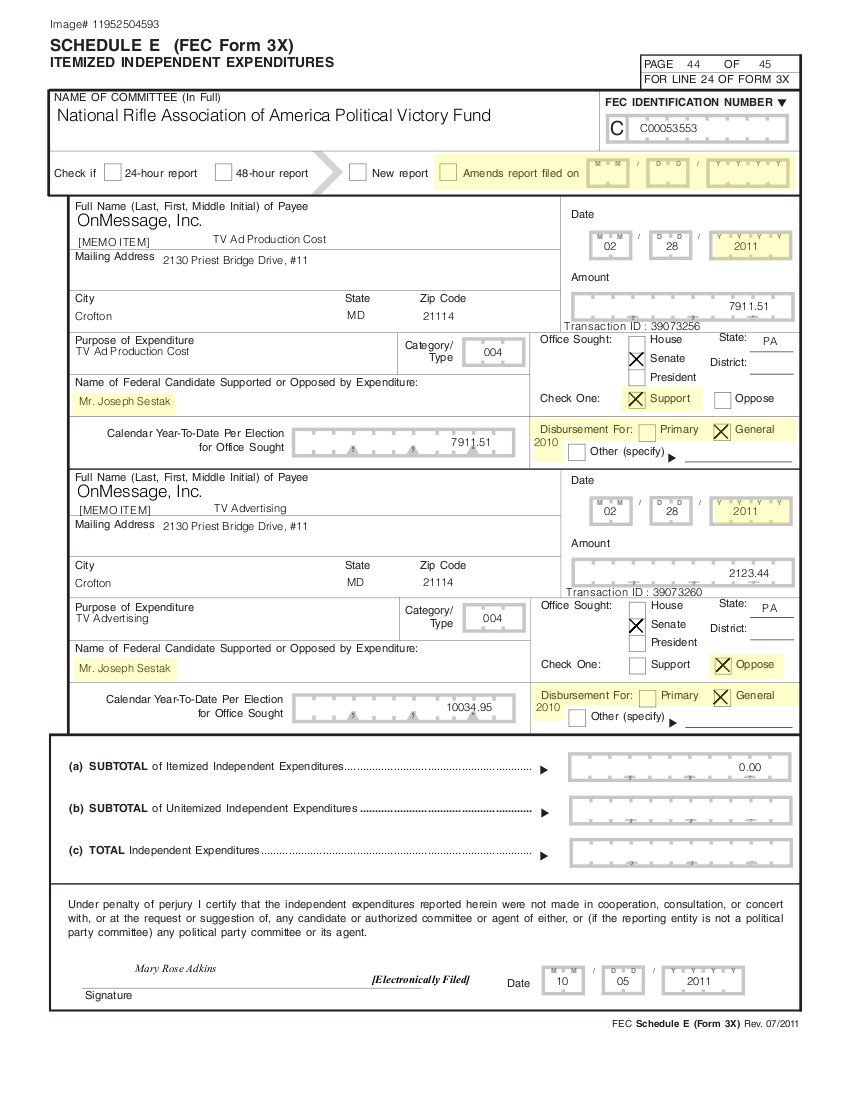 The NRA’s super PAC reported two independent expenditures from the 2010 general election, but assigned a date to them of 2/26/2011–meaning the transactions would show up in the current election cycle. Also, it appears that group spent $7,911.51 supporting Joe Sestak, the Democratic candidate for Senate in Pennsylvania in 2010, and another $2,123.44 opposing him. It’s also worth noting that this filing was an amendment–the second time the NRA of America Political Victory Fund reported this information inaccurately.

Sadly, computers are not yet able to divine the intent of every independent expenditure made by every single super PAC, especially those that are unable to accurately report the information to the FEC. We have corrected many errors in the data, and stand ready to correct any we missed.

We made no effort to combine the results for different vehicles associated with the same organization. In addition to the Political Victory Fund, the NRA had another organization, a nonprofit called the National Rifle Association Institute for Legislative Action, that spent money in the elections. Many labor unions made use of multiple committees to advance their interests. And of course American Crossroads and Crossroads GPS are related organizations. We rated each group separately.

Finally, we are only counting races as they are called. Some results are not final so totals may change as the final races become official.

Our data is only as good as the information reported to the FEC. If you think there is a discrepancy in the data please email us.

Thanks for your interest in our Return on Investment analysis.  We hope you can join us for the webinar!