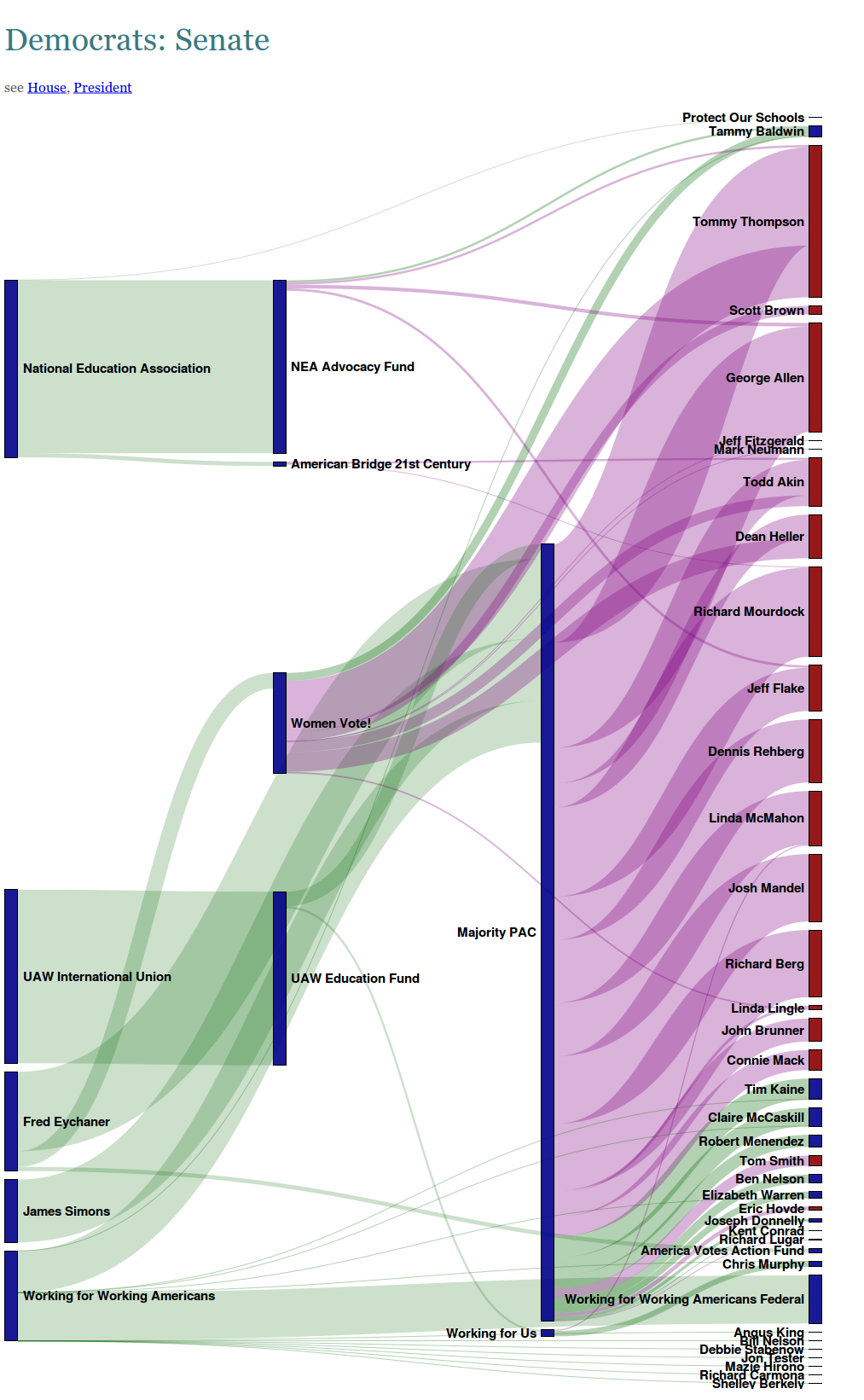 In this year's campaign, many wealthy individuals and groups with large campaign coffers were involved — directly with contributions to candidates or indirectly through outside spending. Sunlight decided to zero in on five mega-donors who gave the most to super PACs backing liberal candidates. They comprise two millionaires, two unions and a political action committee with strong ties to labor:

INTERACTIVE GRAPHICS: Click the image above to one of this round's visualizations of big money flooding several competitive Senate races. The interactive graphic showing House races can be found here and the one for the presidential contest can be found here. Note that for House and Senate graphics, not every super PAC played in every race.

In our first stage of tracing this elite group of donors' new web of influence, Sunlight analyzed data from Follow the Unlimited Money. We found that the Democratic big check writers were dwarfed by their Republican counterparts: The top five Republicans giving to super PACs ponied up $111 million, compared to $43.2 million for the Democrats.

But the Democrats got the most bang for their bucks: The three super PACs that spent the most supporting Democrats — Priorities USA, Majority PAC and the House Majority PAC — all had a return on investment above 50 percent, significantly higher than a number of the GOP-leaning super PACs.

Unlike the Republican donors, who spread their money around, these liberals gave to a very limited number of super PACs involved in federal races. Four, at the most. Eychaner and Simons, as well as union-affliated Working for Working Americans, all donated millions to each of the three major Democratic super PACs. Priorities backed Obama's reelection bid; Majority PAC focused on Democratic Senate candidates and House Majority PAC, as its name suggests, concentrated on the party's House hopefuls.

Despite being in the top five, UAW's mega-giving has been limited and indirect. It has funneled over $8 million to its super PAC, the UAW Education Fund, which has then transferred funds to other outside spending groups. Created last September, the Education Fund has given thousands to House Majority PAC, Majority PAC, Defend Our Homes and Working for Us.

Our analysis has also found that Eychaner and Simons have had a long history of financially backing Democratic candidates and organizations. Eychaner, founder of Chicago-based Newsweb Corp., has given to a variety of left-leaning politicians on Capitol Hill from all over the country. But Illinois elected officials, such as the state's political dynasty — Speaker of the House Michael Madigan and his daughter Attorney General Lisa Madigan — have been the recipients of this frugal millionaire's generosity.

Simons, however, is a bipartisan donor. Over the years, the philanthropist who founded New York-based Renaissance Technologies has given mainly to Democrats, particularly lawmakers in the Empire State. But his Influence Explorer profile shows that he has also supported Senate and House Republicans, including Sen. John McCain of Arizona and former Rep. Mark Kennedy of Minnesota. He has also given thousands to the Republican National Committee. His top recipients in this election continue to be Democrats, but he has also supported Rep. Pete King, R-NY.

Working for Working Americans also supports GOP politicians. Although its super PAC has largely backed Democrats running for the House and Senate seats, the carpenters group has helped fund the Lunch Pail Republicans, which was created earlier this year by the bi-partisan International Union of Operating Engineers. This super PAC has supported GOP incumbents who don't oppose to prevailing wages and other union interests.

Almost of all of the Lunch Pail-backed candidates are running in opposition to the candidates the top three Democratic super PACs are supporting, including competitive congressional races in Illinois, Minnesota and Pennsylvania.

In the coming weeks, Sunlight, through infographics and data visualizations, will continue to unravel the complex web of influence fueled by the Citizens United case that allowed big money to get actively involved in elections. Stay tuned…