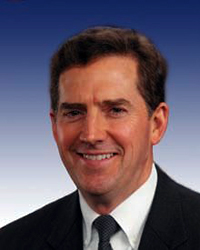 How sudden was Sen. Jim DeMint's surprise announcement Thursday that he'll be leaving his post to head the conservative Heritage Foundation? The Senate Office of Public Records confirms receiving a disclosure form that lawmakers and top staffers have to make when they are negotiating with a potential employer from the South Carolina Republican on the same day DeMint's new job was announced. Ethics rules require the forms to be filed when salary discussions are underway.

On the disclosure form, DeMint disclosed that negotiations for the job with Heritage started yesterday, Dec. 5.

He's the second member of Congress in a week to leave for what is arguably a position influencing his former colleagues. Earlier this week, Rep. Jo Ann Emerson, R-Mo., announced that she will be leaving Congress in February to head an organization that represents rural electric organizations.

Though Heritage employees have been active campaign givers, the organization's most important reach is as a conservative think tank.  Heritage has a sister organization, Heritage Action for America, that operates lobbying campaigns.

DeMint will replace outgoing Heritage president Edwin J. Feulner, whose salary totaled a little more than $1 million in 2010, according the group's most recent tax return.

The senator's Influence Explorer profile reveals that since 1997, when he first entered Congress as a member of the House, DeMint has raised more than $15 million on his own behalf. He appeared to be already gearing up for his next Senate race, not scheduled until 2016. Still on the books, a Dec. 13 lunch fundraiser for the senator at Charlie Palmer Steakhouse, one of the most popular venues in Sunlight's Political Party Time database. DeMint had more than $800,000 in his campaign coffers as of last month.

Update Dec. 7, 2012: In an e-mail sent to Sunlight this morning, fundraiser Jon Graham of The Gula Graham Group, said that the lunch event is now canceled.

DeMint has been building an alternative power base as a top fundraiser for conservative candidates, often challenging his own party in the process.

This year, DeMint morphed his leadership PAC, the Senate Conservatives Fund, into a super PAC, enabling it to collect and spend campaign money in unlimited amounts on behalf of candidates who share the South Carolinian's brand of conservatism. The new entity is called Senate Conservatives Action. DeMint has sometimes gone up against his own party's leadership with those choices: This year, he supported tea party candidate Richard Mourdock's challenge to veteran GOP Sen. Dick Lugar. Mourdock won the primary but lost the general election.

More successful was DeMint's decision in the 2010 campaign cycle to back Marco Rubio over then-Florida Gov. Charlie Crist in the Senate primary. Crist was backed by Senate Minority Leader Mitch McConnell, R-Ky., and then National Republican Senatorial Committee chairman John Cornyn, R-Texas, but Rubio won the primary and the Senate seat.